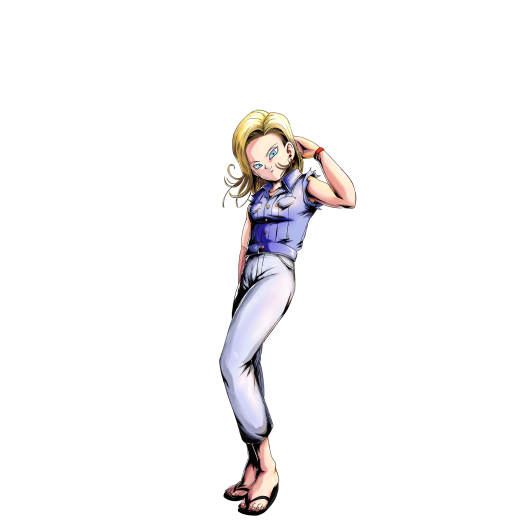 This leisure-ready Android #18 variant is one of the more interestingly designed Defensive Fighters, as she not only Defends her Team through her momentum-killing Cover-change Abilities, but also Supports her Allies depending on their Battle Style.

She provides varying Support Buffs depending on the Style of the Ally she switches into, giving them some combination of an Offensive Stat Buff and some minor Healing. This utility is incredibly significant for her Tag Teams, and the best part is that it's not all the Support she provides.

Despite her Kit having some serious power behind it, she's been overlooked for a very long time - mainly due to her unconventional playstyle, lack of solid Allies to Support, and overall weak contributions to the Android Tag when compared to its other Red options.

All that was holding her back has been erased with the arrival of the Twin Terrors and an especially boisterous green Saiyan - now she's a smothering Defensive Option whose Support dials her Allies' power up to 11.

The power of her Support is what makes her a worthwhile Fighter.

Any Fighter with a defined playstyle becomes a true menace off of a Switch from Android #18. Melee and Ranged Types receive +30% Strike or Blast Attack for 15 Timer Counts, and Defense and Support Types received a generic +20 or +30% Damage Inflicted Buff for the same amount of time.

It's important to not discount the minor Healing the curt Android provides, which can rack up significantly over the course of a match.

SP Android #18 RED's Cover Change Ability is where her moniker as a Defensive Fighter is realized.

When changing cover, #18 greatly Debuffs the enemy by Sealing a random Card slot and increasing the cost of all their Arts by 20.

Not only does she significantly stymie her foe's combat flow with that +20 Cost Debuff to all of their Arts Cards and a Seal to a random Card slot, if her foe is foolish enough to retreat against her, they suffer the severe penalty of losing a Dragon Ball (this triggers 3 times).

These Abilities taken together allow #18 to stagnate enemy momentum. Against a Team that relies on the Rising Rush to deal Damage, like bulky Regeneration Teams, this utility is crucial.

SP Android #18 RED's combat toolkit is very powerful in the right hands. Her Extra Arts card restores her Vanishing Gauge by 50% and permanently increases the Extra Arts Costs of herself and all her enemies. If positioned correctly, #18 can get multiple Vanishing Steps off in the face of her foes.

Her Main Ability, which can be activated after a mere 5 Timer Counts, reduces the cost of her Strike, Blast, and Special Move Arts, as well as increases her Card Draw Speed.

If #18 is given even a minor Inflicted Damage Buff by one of her Support-inclined Allies, this Main Ability's Buffs let her completely steamroll an enemy Team. Her combat prowess is further augmented by the +30% Damage Received Debuff she inflicts her foe with when she enters the field.

This Main Ability even comes with 2 free Abnormal Condition negations, which can be very valuable in matchups against Fighters that can Faint, Paralyze, or Immobilize.

Other than the aforementioned Damage Received Debuff she inflicts the opposing Fighter with when she enters the battlefield, she has no way to Buff her own Inflicted Damage. As a Supporter, she can't deal with enemies by her lonesome, which makes her next to worthless in Crisis situations.

Against foe that cannot be inflicted with Attribute Downgrades, most of her Defensive Toolbox is absolutely useless. A key part of using Android #18 is understanding which Fighters have trouble with her and which Fighters do not.

When these Buffs are active with #18's Main Ability, these Buffs coalesce into some serious Combo potential, including the hilarious byproduct of 20 Cost Special Move Arts Cards.

#18 provides far more than Damage for the ravenous Android however, as her roles aside from Supporting include checking enemy Yellows, delaying enemy Rising Rush progress, and cutting enemy Combos short.

Her Support utility is the real star of the show here, as the +20% Inflicted Damage Buff she provides to SP Android #21 BLU and the +30% Strike Damage Buff she provides to SP Evil Android #21 PUR keeps the Team's Damage very high. Thanks to Evil #21's Substitution Count Reduction, #18's Support and Healing can be chained in rapid succession, supplementing this Team's already absurd sustainability.

The incredibly Offensive SP SSJ2 Kefla GRN can safeguard Android #18 and becomes a true beast with her Support. Kefla's own Support capabilities make Android #18 into a formidable attacker in her own right, thanks to a combination of inflicted Damage Buffs and Debuffs.

Aside from Team Compositions based entirely around her synergies with Android #21 Fighters, SP Android #18 RED struggles to find a place on Android Tag Teams, though she is far from a bad option.

She can complement the already impressive Damage of key Android Fighters like SP Perfect Cell YEL, or supplement the lackluster Damage of the annoying SP Super #17 GRN.

This Equip gives #18 some much-needed Offensive and Defensive Support. With this Support in tow, #18 has a far easier time accomplishing all of her combat roles.

This equip might as well only increase Base Health, because that's all it's being used for. Kidding aside, the massive Strike Damage Buff helps #18's Combo Damage.

This Equip is exactly what SP Android #18 RED needs. The extra Health makes sure her Defensive shenanigans aren't cut short too early, and the Buffs to her Defense and Blast Offense ensure that she'll be able to hold her own.

SP Android #18 RED should really be categorized as a Support Fighter, not a Defense Fighter. Her low Health makes it hard for her to reliably Tank, and her most effective trait is his Precise Assist Main Ability, which helps Teammates significantly.