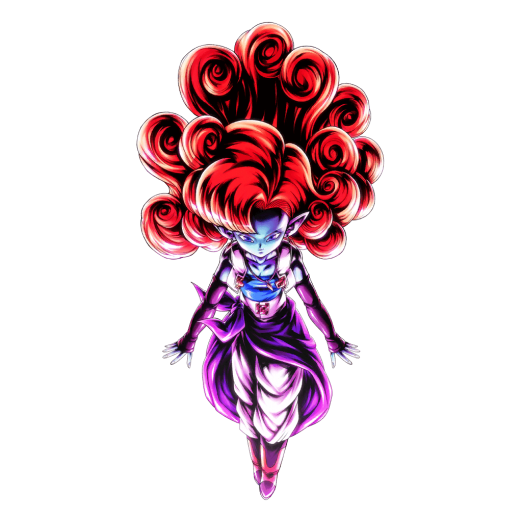 EX Zangya BLU was always a phenomenal Fighter on release, but had trouble finding a home due to SP Ribrianne BLU being the stalwart Blue for Female Warriors, and numerous options being a superior choice in Sagas From The Movies. Her niche of buffing Boujack Fighters upon her defeat was somewhat viable but far from the best way to construct a Sagas From the Movies Team.

Her lot in life changed with the release of SP FP Boujack PUR, whose presence makes her worth core consideration. She synergizes exceptionally well with him, as she Buffs his Strike Attack, he protects her from Green Fighters, and she gives an additional Buff to Boujack variants on top of the Buffs she already gives to her allies when she's killed.

In battle, EX Zangya BLU does a tiny bit of everything and doesn't have too many weaknesses, but should almost always take the fall before anyone else.

EX Zangya BLU is a Fighter with few discernable weaknesses in combat, aside from her inability to act as a crisis Fighter. Early and Mid-game, EX Zangya BLU is a constant annoyance to her opponents, Debuffing their Special Move Arts Card costs and dealing consistently high damage. She can be used as a sacrifice in the face of Rising Rushes, which gives her purpose beyond just melee combat.

EX Zangya BLU Supports her Allies in unconventional ways. She provides a significant +30% Inflicted Damage Buff to them upon her defeat, as well as some annoying Debuffs to her opponents as a parting gift. She prevents all switching for 5 Timer Counts, putting any Ally that enters the battlefield after her in prime position to avenge her sacrifice. Additionally, Zangya permanently increases the cost of all of her enemies' Strike and Blast Arts Cards by 5, slowing their future assaults if untreated.

When still in the realm of the living, Zangya's Special Arts Card provides a Damage Buff to all Allies on use. She can use this before switching out to an Ally with Color Advantage set them up for success.

EX Zangya BLU is beyond viable on any Team that includes a Boujack Fighter. The specific Buffs she gives to the space pirate captain are such a significant boost to his Damage output that she's optimal wherever he sees use.

While EX Zangya BLU dying isn't a bad thing due to her Buffs given out when killed, her untimely demise could be too difficult to rebound from if it happens unexpectedly. She should ideally be sent into opposing Rising Rush attempts, but due to her poor Defense she runs the risk of being killed outright with an ordinary Combo or two.

EX Zangya BLU pairs best with fellow Sagas From The Movies Fighters. She provides a valuable Strike Attack-Buffing Z-Ability, keeping the offenses of herself and her allies high. Boujack Fighters should almost certainly be used with her -- namely SP Full Power Boujack PUR -- with the rest of the Team being some sort of amalgamation of other powerful Sagas From The Movies Fighters that can form a complete color wheel.

Her foe in her debut movie appearance, SP SSJ Gohan YEL is a near perfect companion for her, as her myriad Support Buffs, color coverage, and Ability to draw a Special Arts Card on command greatly accentuate Gohan's best features.

On the Female Warrior Tag, EX Zangya BLU faces stiff competition from SP Ribrianne BLU, but the two can be run together on a BBP Color Counter Female Warrior core, in tandem with SP Super Saiyan 2 Caulifla PUR, SP Kakunsa PUR or EX Videl PUR. EX Zangya BLU contributes to this variant of the team with her consistently high damage and her ability to act as a sacrificial pawn with an upside when the going gets tough.

These types of Extreme-exclusive equips are part of what make Extreme Fighters viable at high levels of play. Zangya greatly appreciates this and should never leave home without it.

This is a necessity on any Female Warrior. Its contributions to Bulk and Damage are almost peerless among equipment options.

On a Sagas From the Movies Tag Team, where Zangya is at her best, this equip's blend of pure Strike Attack Buffs and Bulk Supplements are more than welcome.

EX Zangya BLU was a good Fighter, but had a hard time finding a consistent home in a Sagas From the Movies Teams over SP Vegeta BLU. SP Broly:Cheelai BLU is also superior to her in the core, and her Z-Ability is not good enough to justify her a bench spot. She will fall to Tier 3 as a result, but if the Player is missing SP Vegeta BLU and SP Broly:Cheelai BLU, she is still serviceable on the core, albeit outdated.

Has Bardock (red) aged?
So, I have been using this team in PvP for a while now. Screenshot_2020-09-23…
How good is 14* Z7 Ex Raditz?
Just as the title suggests, I would like to know the thoughts of you all on 14* Z7 Ex…
Need help to build a team
Hi. I need some great team for me to use in pvp. 4 posts - 2 participants …
Which Zenkai LF Gohan Team is Better? FSK Legends or Hybrids?
I have been saving up my crystals to decide if I should spend on the LF Gohan Return…
I need help to build a great Future Team
I need advice for my Future Team, I wanna use this team for PvP. What you thing?! (All…
Read More