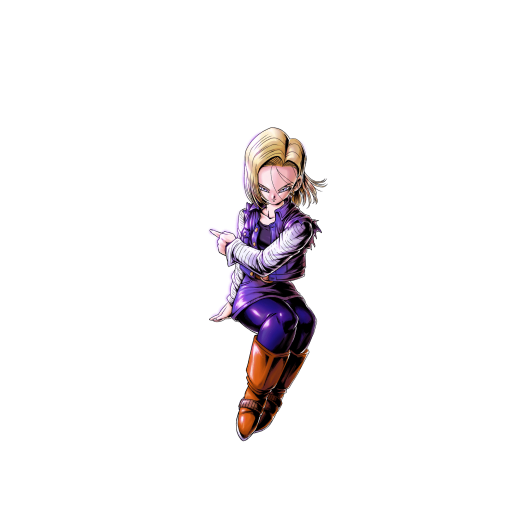 The version of Android #18 that never had the chance to change her ways and fight on the side of good, EX Android #18 PUR is more concerned with blowing things up alongside her brother and his unaltered timeline variant, EX Android #17 GRN.

This Fighter brings new life to the Android Tag--which is welcome as that tag tends to have long droughts between support--but due to the timing of her release, it would have been more appreciated if she fit better with the Future tag, as her and her brother share that powerful tag together.

Despite some mostly average stats, EX Android #18 PUR has a lot of Team Damage Buffs that aren’t limited to Blast Damage.

This makes her more PVP viable, even if she’s pulling the weight of two Tags that are in great need of more new Fighters.

Rather than improve her own Vanish-Stepping abilities like other Android #18 variants, this one can use her Special Move to decrease its Recovery Speed for the Enemy.

This makes her more of a Team player since, even if she isn’t the strongest, this Debuff benefits the whole Team.

Were her toolkit more geared towards the Future Tag, more could be said for this Fighter. But since she Buffs Androids--and in some cases specifically Android #17 variants. EX Android #18 PUR is limited to this Team Build.

While her stats are an improvement on those of Androids and Female Warriors, they are still pretty average by PVP standards.

This sort of Team is where she’s most optimal due to her Ability Buffs.

Still, it’s a shame that she doesn’t also Buff the Future Tag with her Z-Ability since she shares that tag with other notable Android Fighters like EX Android #17 GRN and SP Perfect Cell YEL.

While this Team wouldn’t offer as much Z-Synergy as the Androids, it does have more varied Fighters to choose from like SP Android #18 BLU and SP Mai GRN--but even they have too many Teammate variant requirements to make it worth the effort.

A must have for any EX Purple Fighter.

An absolute must-have for her due to the 4 stats it gives, namely 18% to Blast Attack.

She’s in a weird spot, her Z-Ability is actually very good but many other Android Fighters already do what she does. She’s still great in the bench if the Player is missing other superior options, but since Androids are not in a good spot, she'll be placed in Tier 3 for now.