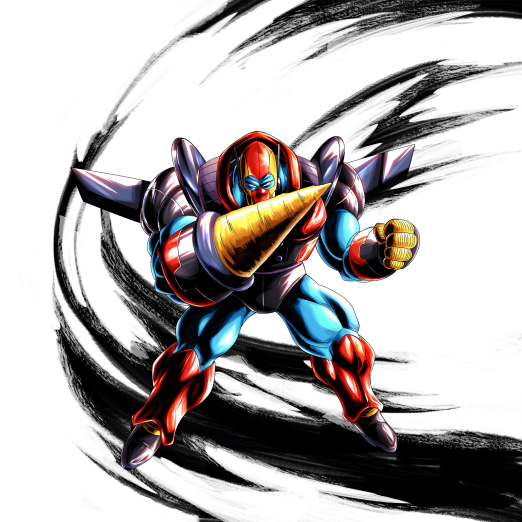 EX Hyper Meta-Rilldo YEL is ostensibly a Defensive behemoth for the GT Tag, and he is for the most part, but there are a few problem aspects of his toolkit that hold him back from being a true fixture of the Tag.

Defensively, Rilldo is a veritable wall - 50% Sustained Damage Cut on Cover is nothing short of fantastic, and his Main Ability's 15% Heal to all Allies gives him the appearance of a Top Tier Defensive Pivot.

Even his Damage is solid; he gets an Inflicted Damage Buff just by entering the battlefield, and his Main Ability grants him an insane boost to his Strike Damage. He even boasts nominal Crisis Utility - jacking up his Critical Hit Rate when one Ally is defeated.

All that being said, Rilldo struggles to justify his inclusion on the core of GT. The main culprit here is his Z-Ability, which only provides a meager Buff to Blast Defense. He's absolutely usable, and he synergizes well with his Team, but his usage decreases the overall effectiveness of his Allies and the best Fighters of GT all surpass him.

He's part of a tried and true Fighter archetype that is just as effective today as it was when the game first released.

Rilldo's Damage is surprisingly high, especially if he's properly Supported, which the GT Tag is more than capable of accomplishing.

He has quite a few Offensive tools at his disposal that let him drill through his enemies, namely his Special Arts Card, which allows him to accelerate his Strike Damage and prolong his combos. When an Ally falls, he's able to greatly increase his Critical Hit Rate, contributing to his overall Offense.

Calling Rilldo's Z-Ability a let-down is like calling brain hemorrhage a headache.

It significantly reduces his viability and the Buff itself isn't even on par with other single-stat-Buffing Z-Abilities until Rilldo reaches 6 Stars. Considering his obscene rarity, that might as well be impossible for most players.

EX Hyper Meta-Rilldo YEL does one thing very well - defend his GT Tag Allies. A GT Team that wants to include Rilldo is more than capable of doubling down on his Utility to make him truly exceptional.

His best teammate for that purpose is SP Super Baby 2 BLU, who can buff his Damage and the Health restored by his Main Ability.

The third Fighter on chosen to complement this core can either be SP Super #17 GRN, who appreciates Rilldo's held Blast Arts Card and Healing, or SP Super Saiyan 4 Goku PUR, who doubles down on Rilldo's Strike Focus and can act as a secondary all-purpose Tank. Any combination of these Fighters would equate to a stellar Team.

SP Baby Vegeta GRN is a shockingly excellent partner for Rilldo, as he makes his Damage something to fear and has incredible synergy with him because of his Bleed infliction.

This Equip is an excellent option for Rilldo, assuming a Super Saiyan 4 is a Battle Member. If SP Super Saiyan 4 Goku PUR isn't available, any equipment boosting his Defenses and Strike Attack is usable in this one's place, such as "Today's the Day you Pay!"

This Equip is a must-run on any EX Yellow Fighter. Rilldo adores the significant Boost to both his Bulk and his Strike Damage.

Awakened I'm an Elite No. １

This is an excellent all-purpose equip for Rilldo, as the Damage against Saiyans, Strike Attack, and Ki Recovery are all valuable for him.

His toolkit is actually not that bad, but SP Syn Shenron YEL is much better. His Z-Ability is also a single buff to Blast Defense, meaning his bench viability is not good.