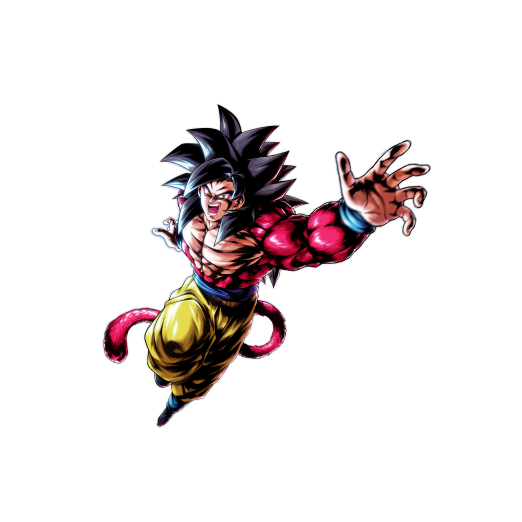 Just six months from the first SSJ4 Goku release, another variant joins the game, representing the maximum power Goku achieved in this form. Compared to SP SSJ4 Goku PUR, this one is diametrically opposite Offensively, since he excels at doing Blast Damage rather than strike Damage.

In a meta where SP SSB Vegito BLU is dominant, players need strong Green Fighters to compete against him, and SP SSJ4 FP Goku GRN matches the sketch, offering very high Damage potential as well as nice durability in some relevant Meta Teams.

SP SSJ4 FP Goku GRN’s Offense revolves around Blast Cards, in fact only through those he’s able to ramp up Damage wise, by getting a Buff per card used. This is quite specific and could’ve made his damage inconsistent if it wasn’t for his Ki Recover and Blast Card Draw on switch that give him a solid headstart in most situations.

Also, thanks to the fact that his Blast Cost gets reduced by for through the same mechanic, he’s always able to chain full combos regardless of the situation.

Without a doubt, SP SSJ4 FP Goku GRN reaches his peak once he activates the Main Ability, that provides him of various Damage Buffs, Arts Draw Speed and a Ultimate Move, so he gets all the necessary tools to deal enormous amounts of Damage, although his Ultimate Move not ignoring Damage Reduction might make it feel a bit underwhelming at times.

You Can’t Defeat Me Easily

SP SSJ4 Goku GRN’s toolkit also provides him of some durability Effects, like a 45% Damage Reduction for 10 Timer Counts on switch (if paired with a Saiyan, which is extremely common for him)  or the massive Heal on his Ultimate move.

However, although it make seem this makes him a Tank, that’s not really true as Damage Reduction feels much less Effective in this Meta, so it should be seen as something that makes him a decently Durable Offensive Fighter rather than an all around powerhouse.

While his Blast Card mechanic Buffs his overall Damage, his Strike Damage constantly feels lackluster probably due to his low Strike Attack value. This is a limit for him, since most of his possible Builds have a mixed Deck.

Although this is generally a Strike Team, he’s really needed here due to the presence of SP SSB Vegito BLU in the Meta. Thanks to all the support he gets on this Team, he can easily reach incredible levels of Offense that make him a really nice Meta Counter.

Just like in Goku Team, his Offense is key to make him a very good option in the current Meta, but he also probably fits better here as this Team wasn’t strictly Strike Focused previously

The Buff to Pure Blast Attack puts this Equipment as a top choice for this Ranged Fighter.

This is the kind of power I'd be running away from

This Equipment has Buffs to both of this Fighter's defences, which mesh well with his 45% Damage Reduction, as well as a large Buff to his powerful Blast Attacks.

This Equipment is a top choice for any Ranged Saiyan due to the Buff to HP as well as Blast Attack.

This SSJ4 Goku variant was pretty good on release. He didn't set the world on fire, but he was able to unleash significant Blast damage and unleash a monstrous Ultimate Move that also healed him for a whopping 40% of his HP. He's not even necessarily old, he's just been completely neglected and forgotten about in more ways than one.