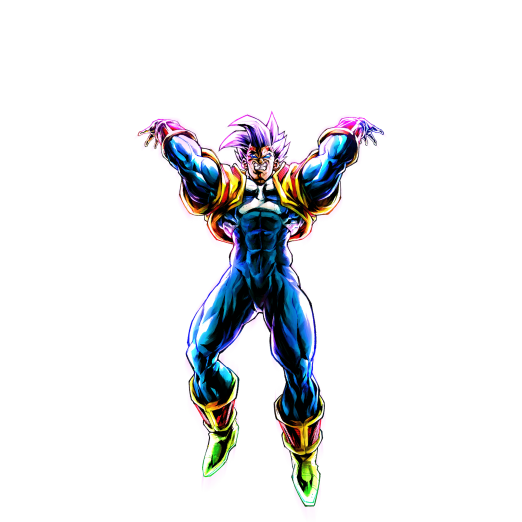 Tuffle science has given rise to one of the strongest Support Fighters in the game, SP Super Baby 2 BLU. Baby’s power lies in the incremental advantages he gives his GT or Regeneration Allies and his conditionally fantastic Offense.

SP Super Baby 2 BLU is a supporter through and through, with Abilities that focus on Healing and Buffing the Damage of his Allies whenever he is switched to Standby.

While he has the same weaknesses as many Support Fighters, most notably a lack of self-sufficiency, his combat prowess is notable against Saiyans or Hybrid Saiyans.

SP Super Baby 2 BLU is a welcome addition to both of his Tag Teams; he’s a Tuffle you don’t want to trifle with.

Such a Lust for Revenge

SP Super Baby 2 BLU’s Main Ability is really something special, and it should be activated as soon as it is able to get value for Baby's Team.

The +40% Damage Buff it provides turns his already Offensive Allies into oppressive wrecking balls, and himself into a deadly bruiser capable of dealing and taking lots of Damage thanks to the +20% Sustained Damage Cut Buff it gives to Baby.

What truly sets this Main Ability apart is its massive +50% to Health Restoration Potency Buff to all Allies for 60 Timer Counts. This synergizes with his personal incremental Healing, giving all his Allies a significant Heal every time he switches to standby.

When Baby is paired with Allies that have personal Healing effects, this Buff scales out of control - creating advantage gaps that are nearly impossible to come back from.

A Shot in the Dark

Revenge Shot, Baby’s Special Arts Card, is a great combo-starter, as it puts the Saiyan Nemeses in prime position for a devastating Combo with the Inflicted Damage Buff it awards him or an opportunity to safely switch in a Teammate and let them tear it up thanks to the Ki it Restores.

This is a deadly neutral tool as well, as it can be used to catch enemies in the midst of a sidestep or trump any Arts Card at mid range. It can even trump Rising Rushes if timed correctly.

SP Super Baby 2 BLU's Ability to apply consistent 10% Heals is what makes him so brilliant as an off-tank. Not only can he recover very easily after tanking a hard hit, he can also switch a couple times to rehabilitate Allies hanging on by a thread.

This Ability incentivizes Baby to switch out frequently, so it's a blessing Baby is so bulky.

If the targets of his ire aren’t his opponent, his Offensive capabilities falter significantly. On both of his Tag Teams, it’s entirely valid to leave Baby off the core when non-Saiyan opponents reveal themselves.

That being said, on Regeneration Tag Teams, Baby is an essentially asset for grinding out games. His contributions to his Team's bulk are so invaluable that he is worth fielding against opposing Teams that use attrition-oriented strategies.

A Leader Through and Through

Baby's Support and incremental Healing are fantastic, but they lose value if one of Baby's Allies dies, and are entirely worthless if Baby is forced to fight by himself.

Like most Support Fighters, Baby requires Allies to function. Without the ability to switch to standby, he cannot assist anyone, least of all himself.

SP Super Baby 2 BLU is a great boon to the Regeneration Tag, which desperately needed a competent Blue option. Baby’s presence as a Healer and an off-tank ameliorates a lot of the Tag’s best Fighters’ Defensive issues.

The introduction of incredible Defensive and Offensive options in the form of Zenkai 1 SP Majin Buu GRN and SP Evil Android #21 PUR respectively each become immortal brawlers with the Support of Baby in tow.

Evil #21 in particular is one of Baby's best partners, as she counters problematic Greens and shreds neutral match-ups with Baby's Support. Once Baby's Main Ability is triggered, she is more than capable of obliterating the majority of the Meta's strongest Fighters in a single Combo.

Finally, SP Omega Shenron RED gives the Team a lot more Damage viability, and an additional Dragon Ball when he comes in, which fits the Regeneration playstyle of battles of attrition.

SP Super Baby 2 BLU is the GT Tag’s best Blue Fighter and its best Support Fighter. He’s an absolute monster on this Tag. His Healing Abilities harmonize with SP Super Saiyan 4 Goku PUR’s self-healing, and his Inflicted Damage Buffs are devastating in the hands of SP Omega Shenron RED

Baby functions as an excellent partner for the Leader of the Shadow Dragons, SP Syn Shenron YEL, whose Endurance effect is considerably magnified by Baby's Buff to Health Recovery.

With Baby's Support in tow, Syn Shenron can output fantastic Damage - assuming a Rising Rush has already been activated by the time he gets them.

This Equip not only significantly Buffs Baby's Blast Damage and Health, but it also doubles down on Baby's Hybrid Saiyan Tag-Hate Buff.

Keeping with the theme of keeping him alive, this is great for the 15% to both Defenses. This is a fantastic Equip for Baby on a GT Team.

The same as above, only this Buffs Blast Attack instead. If Baby is not fielded alongside any Super Saiyan 4s, it is best to focus on the Equip options provided by the Regeneration Tag.

On a Regeneration Team, this Equip can be used to boost both Baby's Defenses and his already impressive Blast Attack.

This Equip gives SP Super Baby 2 BLU incredible Defensive Utility and a sizable Blast Attack Buff. Baby wants all the Defense he can get.

Super Baby 2 went from an oppressive leader of Regen, to quickly falling off and never being recommended for PVP even when he was their only Blue. Now that SP Android #21 BLU and SP Kid Buu BLU much better on the core, he’s pretty much dead in the water