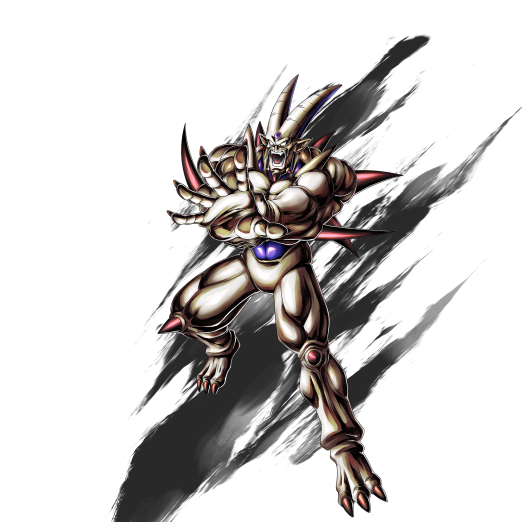 While he’s unlikely to see play over SP Super Baby 2 BLU on the GT Team, EX Syn Shenron BLU is still a decent Support Fighter that can justify seeing play due to his Unique Abilities.

EX Syn Shenron BLU’s stats are quite low, but luckily he’s one of those Fighters that is useful when killed. When he’s defeated, he destroys two Dragon Balls for the opposing Team. Alternatively when alive, he acts as a Support that gives Buffs to his Teammates until he’s killed --or when he’s switched out -- with a bit of an anti-Saiyan emphasis to him.

Given how important Rising Rush is, manipulating Dragon Balls has always been an effective trait for Fighters to have. This Unique Ability also includes his anti-Saiyan capabilities, increasing the Damage an opposing Saiyan receives by 20%, and lowering their card draw speed by 1 level.

The first part of this Unique Ability gives his GT Teammates a 20% Damage inflicted Buff until he's taken out, meaning no switching is required. This synergizes nicely with this aforementioned Dragon Ball destruction when killed, making him useful at any point of the Match.

The second portion of this Unique Ability requires a Shadow Dragon Teammate, but does reward him greatly despite the limitation. When he's switched, he restores 30 Ki and EX Syn Shenron BLU will take 30% reduced Damage for the next 20 timer counts.

Even if he never sees play on the core, he's an amazing bench Fighter for both GT and Shadow Dragon Tags, giving them Strike and Blast Attack.

Base stats are not always the make or break of a Fighter, but they do matter. In this case, outside of some serviceable Defenses, EX Syn Shenron BLU's stats read like a Fighter that came out years ago. Most Support Fighters don't have the greatest stats, but even with this in mind he falls way too short.

SP Super Baby 2 BLU is also a Support Fighter, and just flat out outclasses EX Syn Shenron BLU on GT. Shadow Dragons are a Team to look out for in the future, but as of right now are not quite Meta relevant.

Given how his Unique Ability requires a Shadow Dragon Teammate, SP Syn Shenron YEL or SP Omega Shenron RED comes along with him. Other core Fighters would include SP SSJ4 Goku GRN and SP SSJ4 Goku PUR

He’s a good tech option against Saiyans, as he lowers their card draw speed and increases their Damage received when faced with one. He’s also useful when dead or alive. That being said, it’s still hard to justify him on the core over SP Super Baby 2.