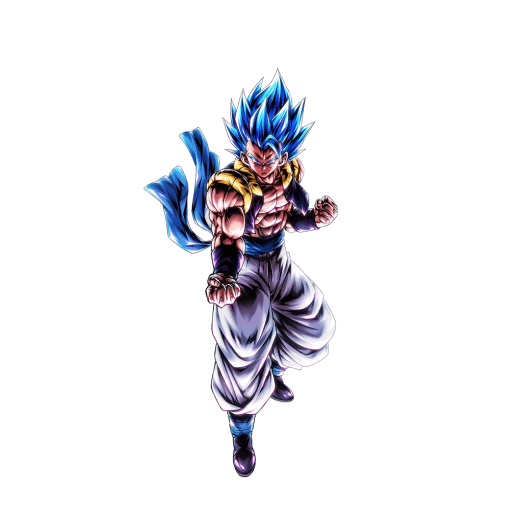 The Ultimate Fusion, SP Gogeta Blue YEL, has arrived in Dragon Ball Legends as a Legends Limited Fighter.  This Fighter’s arrival is one that the player-base has been anticipating for a long time and he has been worth the wait as he is a fighter that can turn the tide of battle in the blink-of-an-eye.

SP Gogeta Blue YEL’s toolkit is similar to his SSJ counterpart, SP Super Gogeta RED, in the sense that both of them can ramp up their Damage effortlessly and have one of the best Extra Arts in the game.

The Extra Arts That Can Win Games v2

As stated above, SP Gogeta Blue YEL has a very similar Extra Arts to SP Super Gogeta. This Extra Arts Card is one of the most oppressive cards in the game, due to the fact that it stops Tap attacks (which are generally used after you dodge an opponent’s Blast Arts), Strike Arts, and Tackles( which are often used at midrange to initiate a combo or to get your opponent to use their vanish gauge).

If you successfully land his Extra Arts you are almost guaranteed to K.O one of your opponent’s Fighters. It locks the opposing Fighter for 5 timer counts, grants a 50% Damage boost along with 40 Ki and an extra Strike Arts. If you miss his Extra Arts there’s still some safety due to the 30% Damage Reduction he gets upon activation.

SP Gogeta Blue YEL’s Ultimate Arts -” Meteor Explosion” is one of the most Damaging ultimates in the game. It has the supreme damage modifier which is the highest in the game and for each card he uses, he increases the damage of it by 5% up to a maximum of 30% and gets a standard 30% Ultimate Damage upon activation.

If used effectively, this Ultimate Arts can deal significant amounts of Damage to any unit in the game (barring RED Fighters) and could potentially one-shot certain Fighters.

SP Gogeta Blue YEL gets a 25% Damage Inflicted boosts against Fighters of the Powerful Opponent Tag. With the release of SP SSJ Broly: Full Power BLU, Powerful Opponent Fighters have become more common in PvP and Gogeta can easily take care of most of them with his increased Damage against them.

As stated previously, SP Gogeta YEL can ramp up his Damage similarly to SP Super Gogeta RED although it's to a lesser degree. SP Gogeta YEL comes into the battlefield with 80% Damage Inflicted which is the new standard among most modern Fighters but Gogeta can quickly ramp up his Damage up towards 130%! With his “All Surpassing Power” Unique Ability. This Unique Ability gives him 10% Damage for each card he uses and can reach a maximum of up to 50%.

This means that generally, Gogeta won't have his maximum Damage output until his second combo but nevertheless, he will deal significant Damage against neutral Fighters.

SP Gogeta Blue YEL has the same Ability as SP Jiren GRN, where he nullifies any special cover change but Gogeta can do it up to 3 times. This is one of the best abilities in the game due to the nature of how switching Fighter plays a big role in a PvP match. The ability to nullify that is insanely powerful.

Has Ki But No Cards

SP Gogeta Blue YEL has great Ki Recovery and gets 30 Ki upon entering the battlefield but he doesn’t have any access to a card draw speed increase to utilize those two things effectively. He still does good Damage without it but not having it diminishes the value of the Ki Recovery and Ki he gets on entry.

SP Gogeta Blue YEL gets a 30% Damage Reduction when the battle starts but it’s not enough to negate any significant Damage from top-meta Fighters. However, he does have a self-heal and heals each time he enters the battlefield to help his survivability.

SP Gogeta Blue YEL is the primary YEL Fighter for the God Ki Team, replacing SP Champa YEL. Gogeta adds an extra dimension of offense to the God Ki Team and becomes even better if paired up with SP Vados GRN. SP SSB Goku BLU compliments Gogeta very well, being his shield when attacked by Fighters who can deal significant Damage to him.

SP Gogeta Blue YEL is an interesting choice when it comes to the Fusion Warrior team. He doesn’t provide any Z-Abilities for the team unless he is at six(6) stars which is very difficult to accomplish and as such, some players may feel as though SP SSJ Vegito YEL is the better option. Nevertheless, SP Gogeta Blue YEL reinforces what the Fusion team is all about, Damage.

It goes without saying that SP Gogeta BLU YEL was meant to be on the Sagas From The Movies team as this is the first team that he buffs with his Z-Ability. SP Gogeta Blue YEL and SP Super Gogeta RED make a perfect combination on this team, and SP SSJ Broly GRN is a wall to protect them from any incoming threat.

A HP Equip is a must-have. This Equip also provides the Melee Type Gogeta Blue with an average sized Base Strike Buff.

Gogeta Blue is in a unique place compared to other Fighters in terms of Equipment; he has access to 2 HP Equipment that both also provide a good Base Strike Buff. Therefore, due to this Equipment also having a HP Restoration Buff, amplifying his own switch-in healing, this Equipment is also recommended here.

A Pure Strike Equip is optimal here, alternatively Mind your own business, Tin Men! can be used on Teams without Saiyan allies, or Alright!! can be used on a Fusion Warrior Team.

He’s being considered 3 stars on the Tier List. At 6 stars, SP SSGSS Gogeta YEL would be top/middle of Tier 1.

At 3 stars, he really struggles against some of the better Teams in the game which are filled with Zenkai units with massive base stats. He can’t take a hit, and it takes him a few Combos to really get going. No card draw speed also really hurts a unit like this, who relies on using cards as much/quickly as possible whether it’s via stacking his Unique or eliminating an opposing unit after landing his Extra Move.

His Extra Move can borderline eliminate a lot of opposing units, but one mistake here can be disastrous for him. His Extra Move is too much of a double edged sword, and while it's similar to SP Super Gogeta RED's Extra Move, Super Gogeta can atleast afford to take Damage.