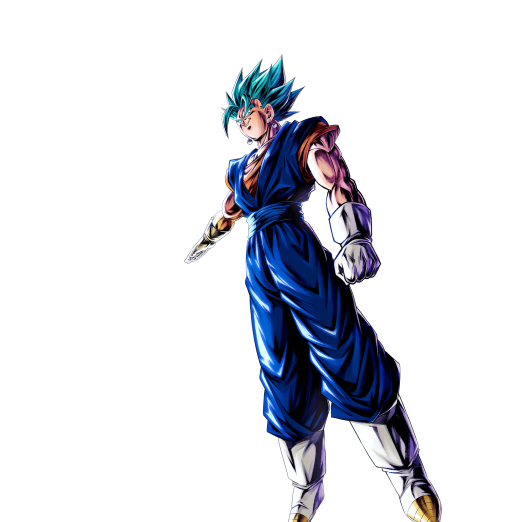 Another Vegito has made an appearance for the anniversary of Dragon Ball Legends for the third consecutive year, SP SSB Vegito PUR has come to take the Fusion and God-Ki team to new heights with his mighty defensive capabilities along with good damage and some support capabilities.

He excels in Blast Damage and his Special Move Arts will hit like a truck once fully ramped up. This Fighter has a very balanced toolkit that doesn't excel at anything but has a lot of things to help you in battle.

SP SSB Vegito PUR gives Future, God-Ki, and Fusion Warrior allies a 20% Damage Inflicted and KI recovery boost on switch out. It’s not much but it’s still helpful for your teammates to do more Damage and gain Ki quicker and, surprisingly, a Vegito Fighter would have support capabilities in their toolkit but it's welcomed.

He also has a 25% self-heal to help with his survivability in a match. Overall, he’s a Fighter that can reliably take hits for most of the match and can also heal himself.

SP SSB Vegito PUR’s Special Arts, God Smasher, is amazing. It removes an enemy’s Dragon Ball on hit and removes their Special Arts which can be useful against Fighters with counter Special Arts. Not only does he do that but he also gets card draw speed when it lands and locks enemies in. With this, you can waste their vanish with a Blast Arts and then immediately use ur Rising Rush to guarantee a K.O.

Vegito’s Ultimate Arts have a similar effect as Z7 SP SSJ Bardock BLU’s. He regains 100% of his vanish gauge when it’s activated which is amazing because even if you miss the ultimate, you won’t be severely penalized for it and his Ultimate Arts also gives him a card draw speed increase which is the first of its kind.

Vegito needs to wait for 25 timer counts before he can effectively deal Damage against other Fighters because he gains an extra 40% Damage Inflicted when 25 timer counts have passed.

Vegito’s stats are below average for a SPARKING Fighter. His highest-ranked stat is his HP which is ranked 81st in the entire game.

Ultra Instinct Goku sadly needs a lot of stars to be great and that's difficult as he’s a Legends Limited Fighter but Vegito isn’t which means more players are going to have him at higher stars.

Vegito can support the team and synergizes well with Vados as she also provides support to help out his Damage as well as heal him to increase his survivability that goes along with his Damage reduction.

The Fusion Warrior team has been wanting a PUR Fighter for quite some time now as their best PUR Fighter has been SP LL Super Vegito for the last 2 years. SP SSB Vegito PUR has fully replaced him on the Fusion team as he provides better defense, offense and also has support in his toolkit which makes Fighters such as Z7 SP Super Gogeta RED and SP LL SSSJ4 Gogeta GRN do more Damage. He also has a nice Z-Ability for the team as he gives them base Blast Attack and Strike Defense.

SP SSB Vegito PUR fits the Future team perfectly as he’s also a Blast-centric Fighter and he’ll do better than SP SSB Vegeta PUR against SP LL SSJ3 Goku GRN. He’ll give some support to the team so you’re not missing out on SP SSB Vegeta PUR’s support completely. He has good Blast Damage, can take a few hits, and has a great Z-Ability.

A HP Equipment is recommended for every Fighter due to the large increase in survivability. This Equip provides Vegito with additional Base Blast Attack. Alternatively, Battle of Saiyans can be used here for a Pure Defense Buff vs Saiyans.

This Equipment plays to Vegito's strengths and provides him with additional Base Blast and Special Move DMG.

A Pure Blast Equipment is a must-have here with such large Base Blast Buffs, further increasing his Blast output.

While he’s only considered 7 stars on the list, he still performs excellently in all facets of combat with no particular weaknesses. Past 7 stars, he really starts to take over games and scales better than most units. Barring a looming SP Super Vegito PUR Zenkai, he’s looking like the mainstay on all of the teams he buffs for a long time.