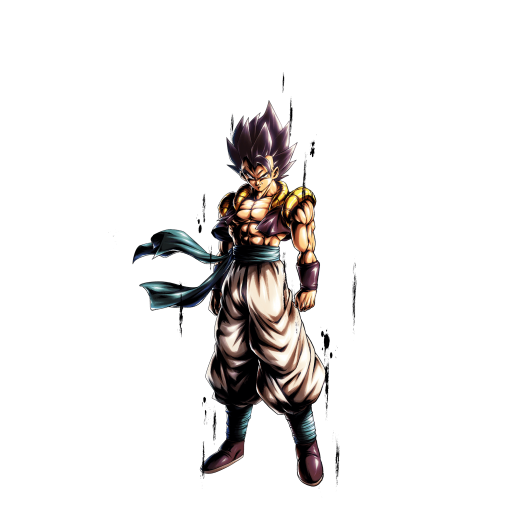 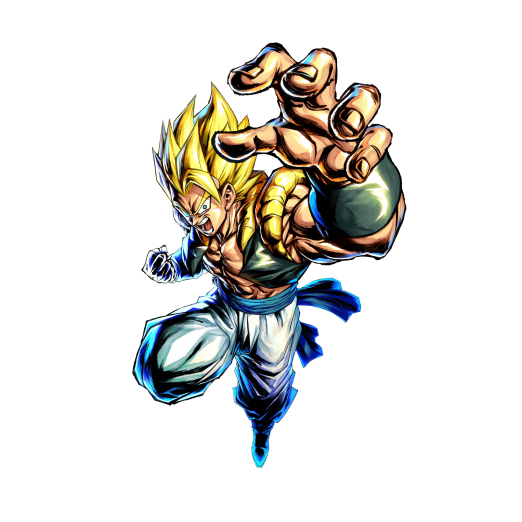 This Base Form Gogeta variant hails from the “Dragon Ball Super: Broly” Movie. While he’s not in his “Super Saiyan Blue” form like many expected him to be, his canonical Moveset is represented faithfully and spectacularly.

After Transforming, this Fighter’s Damage output skyrockets thanks to insanely high stats, deadly Unique Abilities, and a unique yet excellent Special Move. Despite this Fighter's age, he has maintained his relevance, remaining an enduring part of the Fusion Warrior Tag Team's Core.

After Transforming, SP Gogeta BLU becomes an Offensive powerhouse. His high stats, his 40% Inflicted Damage Buff 20 timer counts he gets when he switches in, and his Blast Damage Buffing Extra Move that also lowers Blast Card costs by 10 for 10 timer counts all contribute to his Offensive dominance.

An important fact about SP Gogeta BLU is that while he’s a fantastic Ranged Fighter, his Damage Buffs affect his Damage output generically, letting him deal great Damage with both Strike and Blast Arts.

His toolkit gives enough Boosts to land a devastating blow to most Fighters with just one Special Move. For starters, its gets Boosted by a maximum of 70% depending on how many timer counts SP Gogeta BLU has spent on the field.

Secondly, his Extra Move further Boosts its Damage, lowers its Ki cost to 30, and gives it the ability to inflict the enemy with No Switching for 3 Timer Counts, just enough time to make sure annoying Cover Effects don’t get in the way.

His Special Move even boasts the ever-excellent Blast Armor, allowing it to trump most neutral options. If this Card is Drawn via his Main Ability at mid-range, it can be safely initiated if the opponent has made a move before the Main Ability stops time.

SP Gogeta BLU is a very durable Fighter in his Transformed stats, specifically thanks to his great Defensive stats. While this doesn’t make him a Tank, he’s tough to kill, especially since he can Heal by 20% with his Main Ability.

In this regard, he can benefit from some excellent Equips that improve his Defense considerably among other things.

SP Gogeta BLU’s toolkit has little to no flaws, however, it doesn’t mean that this Fighter has no weaknesses.

Gogeta's main failing is his lack of efficacy as an anchor; all of his Damage Buffs wear off after a certain amount of Timer Counts. At the end of long fights, if Gogeta is the last Fighters standing, his Damage is mediocre.

Gogeta relies on the Damage Buff he grants himself with on entrance to sustain his Damage output, and in Crisis scenarios, his only way to increase his Damage is his Special Move Arts and his Extra Arts Card, and neither of which are particularly reliable.

SP Gogeta BLU’s impact on this Tag is interesting because it basically opens the door for a Blue Color Counter Build if paired with SP SSJ Bardock BLU and SP Super Vegito PUR .

While SP Gogeta BLU doesn’t have the Super Saiyan Tag right off the bat, his Damage output is excellent on its own. After he Transforms, he turns into a nigh-unstoppable death machine when Buffed by SP SSJ Bardock BLU’s Unique and Z-Abilities.

This Team has fallen from favor as of late, but it still can put up a fight with its explosive Damage output.

This Team got a huge Boost with the additions of SP SSJ Youth Gohan YEL and SP Full Power Boujack PUR, but SP Gogeta BLU's placement on the Team is a bit iffy.

He faces stiff competition from SP Vegeta BLU and especially his movie co-star, SP Broly: Cheelai BLU. These two synergize much better with the current Sagas From the Movies Team as it has a pretty noticeable emphasis on Strike Attack.

SP Gogeta BLU is one of the cornerstones of this consistent, bulky, and versatile Tag. Gogeta and arguably the Tag's most powerful Fighter, SP Super Vegito PUR, form a truly deadly core that combines both Defense and overwhelming Offense. Vegito checks the Green foes that give Gogeta trouble, so the two are a dynamite pair.

The roster of characters that can complement these two titans has grown over time. The classic SP Vegito RED adds reliable Bulk and a way to check the Yellows that threaten his Super Saiyan counterpart, while SP Super Gogeta GRN can be brought instead if enemy Transforming Warriors reveal themselves, and synergizes with his base form's Blast-oriented style.

SP Vegito YEL is an absurdly strong Fighter who relies on Gogeta to check his Red nemeses and enjoys the Special Move Arts Card Gogeta can draw for him.

This Tag has maintained its place in the meta because of the strength of its core Fighters, and SP Gogeta BLU is a significant part of its game-plan.

This Equip was almost certainly made with SP Gogeta BLU in mind. Strike Defense, Special Move Damage and Blast Attack are all ideal for the movie star.