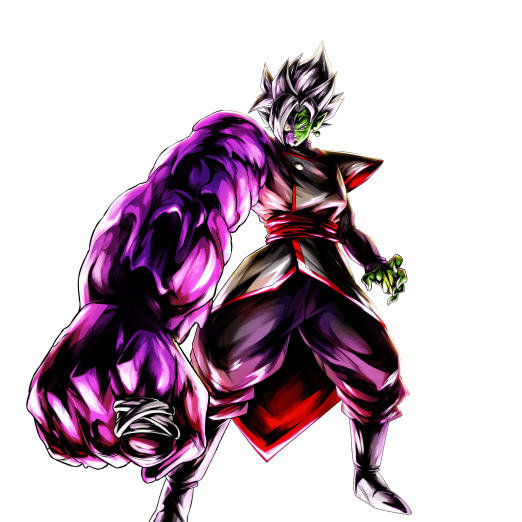 The Divine God turned into a Monster, SP LL Half-Corrupted Zamasu RED has arrived in Dragon Ball Legends and headlines the 3rd Anniversary alongside SP LL SSJ4 Gogeta GRN. Zamasu has exceptional Damage output but it comes at the cost of his defensive capabilities which is non-existent.

Even so, Zamasu is one of the better Legends Limited Fighters that we’ve had in the game up until now and is the missing piece that the God-Ki team has been looking for.

SP LL Half-Corrupted Zamasu RED is one of the best Damage dealing Legends Limited Fighters, only rivaled by SP LL Kid Buu BLU. Zamasu gets a basic 80% Damage Inflicted buff when the battle starts but where his Damage starts getting crazy is when he uses either a Blast Or Strike arts and gets 15% Damage Inflicted. With this, he can reach up to 140% Damage Inflicted which will make even top-meta Fighters suffer significant Damage.

Surprisingly, Zamasu buffs his allies when he’s defeated and debuffs the enemy. He gives them 30% Damage Inflicted and inflicts all enemies with -1 Arts Card Draw Speed level and -70% to health restoration for 30 timer counts. This effectively hinders your opponents’ ability to prolong their combo while simultaneously making Fighters with self/team heals heal barely anything.

Death buffs are phenomenal as they give you something positive when one of your Fighters goes down.

You Move, I Win

SP LL Half-Corrupted Zamasu RED gets some buffs depending on what the opponent does. If the enemy is comboing Zamasu, he’ll reduce their Ki By 5 for each strike or blast arts, similar to SP Rose Goku Black GRN, and also increases his defense by giving himself a 5% Damage reduction for each arts that is used against him but this does not help his defense at all.

If the enemy switches against Zamasu, he gets 50% of his Vanish Gauge back up to 8 times. This puts him in a position to stay on the field for long periods if he can continuously force opponents out which he’ll be able to do due to his incredible Damage.

When Zamasu secures a kill, he destroys all of the opponent’s cards which doesn’t give them a chance to retaliate when the new Fighter ends up on the battlefield which gives Zamasu some time to come up with an attack, switch out or buy time for his vanish to come back.

SP LL Half-Corrupted Zamasu RED’s Special Arts is similar to SP Omega Shenron RED’s where it locks the opponent in and gives him an opportunity to Rising Rush or use strong attacks such as his Special Move or Ultimate Arts. However, Zamasu’s Special Arts also give him type neutral for 3 timer counts which can be used to get rid of those pesky BLU Fighters.

Even with 30% Damage Reduction, SP LL Half-Corrupted Zamasu RED’s defense is similar to SP LL Ultra Instinct Sign Goku PUR, it’s that bad. He can’t reliably take a hit and being a Legends Limited Fighter makes it even harder to get him to a star count where he can take hits from top meta Fighters.

As mentioned in the Overview, Zamasu is the RED Fighter that the God-Ki team has been wanting for a very long time now. He buffs the team with his Z-Ability and increases their offensive capabilities tremendously with his Damage and death buff support.

However, Zamasu has brought down the team’s defensive capabilities as he and SP Vados GRN are both frail. Even so, he’s a necessary Fighter for the team as he can effectively shut down YEL Fighter such as the infamous, Z7 SP Android 18 YEL.

Zamasu does not have a spot on the team as he does not buff the team with his Z-Ability and Z7 SP Super Gogeta RED is far superior.

Similar to Powerful Opponent, Zamasu is a fine addition to this team but he fits the Strike-centric version of the team with the likes of SP LL Rose Goku Black PUR, SP LL Future Gohan, etc. This version of the Future team is the inferior version and requires a lot of Legends Limited Fighters at high stars to be effective and Zamasu only buffs the future team at 6 stars which is going to be difficult for most of the player base.

A HP Equipment is recommended on every Fighter due to the large increase in survivability. Alternatively, Awakened I'll Turn You to Scrap! can be used here for a maximum Strike DMG Build.

This Equip is a must have, providing Zamasu with a large Base Strike Buff as well as a Ultimate and Special Move DMG Buff, with some Blast Defense on top.

Please note, this is the optimal Equipment for the God Ki Team. For the Future Team, Awakened You Stay Here is optimal here. For the Regeneration Team, Yaaah! or Haaaaaa! can be used here.

While Zamasu’s most glaring flaw is his survivability, his God Ki and especially Regeneration teammates can help him stay alive and do what he does best with a multitude of Cover Changes as well as Healing capabilities. One of the most notable parts of his toolkit is his AOE Extra Move which locks the opponent in and also puts him at type neutral for a few timer counts. This can outright win the game in some instances if he’s able to trap an important unit, which subsequently allows him to keep destroying cards after defeating an Enemy, constantly giving him the upper hand.