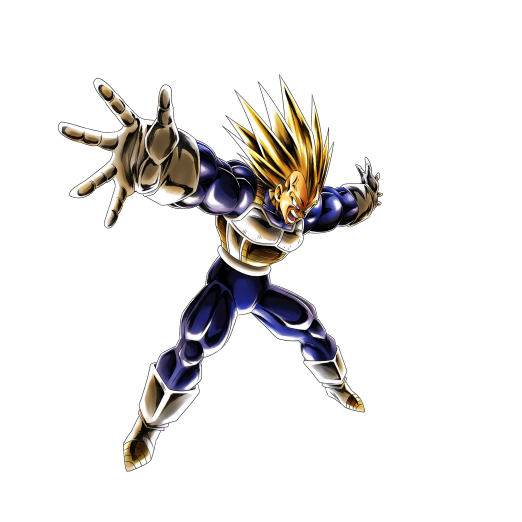 EX Super Vegeta GRN gives some additional firepower to the Vegeta Family Tag. While he's still behind SP SSB Vegeta GRN on the core, he's an excellent backup choice in case the Player has not acquired him.

Offensively he boasts one of the best Main Abilities in the game, as it takes away the Enemy Vanish Gauge and leaves them open to a lethal Special Move.

Defensively, he’s lacking which is a common trope among Vegeta Family Fighters, but the addition of SP SSJ Rage Trunks YEL goes a long way in rectifying this issue.

EX Super Vegeta GRN has the best double attacking Z-Ability for the Vegeta Family Tag, so he’s quite valuable on the Team, whether he’s used on the core or bench.

Let’s see if you’re perfect enough to withstand this!

EX Super Vegeta GRN’s Main Ability, if used correctly, is an unavoidable burst of Damage as it reduces the Enemy’s Vanish Gauge to 0 and draws a Special Move that has been amplified with 80% Special Move Damage.

EX Super Vegeta GRN is very bad defensively. Most of the current Meta Fighters can threaten him from just from a single combo and his Team certainly doesn’t help at all seeing as the Vegeta Family Tag doesn’t have much in the way of Defensive capable Fighters, outside of the aforementioned SP SSJ Rage Trunks YEL

EX Super Vegeta can get Damage Buffs and Support Buffs by defeating Enemies, but this requires him to secure a kill for those effects to activate. Generally, you would assume that Support from a Support Fighter would be a given regardless of whether you are winning or losing.

Once again, since he's behind SP SSGSS Vegeta GRN on the core, he's only really a solid bench on the best possible Vegeta Family Team. If SP SSGSS Vegeta GRN has not been acquired, EX Super Vegeta GRN is still a solid addition. While his Support capabilities are hard to get off consistently, he does have a few other aspects in his toolkit. Most notably his Main Ability, which can potentially cripple an opposing Fighter and leave them open to his iconic Final Flash Special Move.

With other Fighters such as SP SSJ Rage Trunks YEL, SP Teen Trunks PUR, SP SSJ4 Vegeta RED, and one of SP SSJ Vegeta BLU or SP Vegeta BLU, Vegeta Family is a deceptively strong Team in this Meta.

EX Super Vegeta GRN’s Main Ability takes away the opposing units Vanish Gauge completely and leaves them open to a devastating Special Move. He also has some Support in his toolkit. His real problem lies with a Legends Limited fighter sharing his color, which will always keep him in Tier 2 or lower.

Db legends team build help
I am totally new here and very confused on team building. I know I need to focus on 1…
Quick recover after dokabaki impact bs. **Q&A**
Ok, so how is it whenever i win a dokabaki impact , then go to counter attack, no…
Team building Need help
CollageMaker_20210120_2037293682048×2048 2.29 MB 1 post - 1 participant …
Help me create a viable team. Your help will def be appreciated
Hey everyone. I would really like y’all to pls help me create a viable team for PvP. I…
Your worst summon session (or whatever you call it)
So for some reason I randomly wanted to create this and basically talk about everyone…
Read More