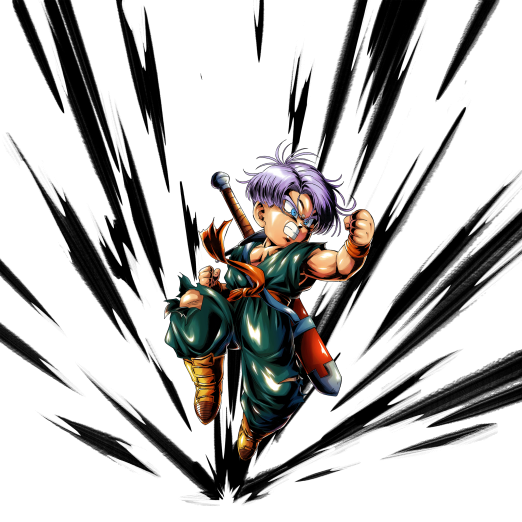 EX Kid Trunks GRN is a versatile, powerful Support Fighter with a laser focus on supplementing the weaknesses of Vegeta Family and Sagas From the Movies Allies. Kid Trunks distinguishes himself by being the second Fighter to provide permanent, non-cancelable Support Buffs until falling in battle.

Fortunately, EX Kid Trunks GRN does more than offer a background radiation of meager Buffs, as he also provides a fantastic Team Heal and Substitution Count Reduction via his Main Ability.

He shares many of the deficiencies common among Support Fighters, with poor bulk and mediocre Damage, but because of how valuable the Buffs he provides are over the course of a match, EX Kid Trunks GRN is absolutely worth consideration on Sagas From the Movies Tag Teams and especially Vegeta Family Teams.

EX Kid Trunks GRN does not solely provide Buffs with his Unique Abilities; he also can make a Supportive impact with his Main Ability and Special Arts Card, which he is guaranteed to draw the first time he enters combat.

The Junior Hero’s Main Ability is where he derives his true value, as an unconditional Team Heal and Substitution Count Reduction has the potential to completely turn the tide of a battle.

Able to put up a Fight

Thanks to both his non-conditional permanent Damage Buffs and his personal Buffs to both Strike and Blast Attack, EX Kid Trunks GRN can deal fairly impressive Damage when on the right Tag Teams.

Defense is not EX Kid Trunks GRN’s strong suit. A single combo has the potential to finish him off. Neither of his Defenses, nor his Health can even qualify as passable, and because of the rarity of EX Fighters, it’s unlikely Limit Breaking to fix this deficiency is possible.

EX Kid Trunks GRN only gives a minor Buff to the Strike Damage of Sagas From the Movies Fighters with his Z-Ability until 6 Stars, at which point that buff also encompasses the Vegeta Family Tag.

Even without taking his rarity into account, it’s difficult to justify using him on the Bench of Sagas From the Movies Tag Teams. The Tag has an extensive and versatile selection of Z-Abilities that surpasses Trunks’.

This is the premier Tag for EX Kid Trunks GRN, mainly because it encompasses both him and SP Hero Tapion RED, the Fighter he best synergizes with.

Tapion and Trunks form a fantastic Support shell that any strong Sagas Warrior can fit into, such as SP Super Saiyan Youth Gohan YEL and SP Full Power Boujack PUR.

Unfortunately, Kid Trunks needs to reach 6 Stars before his Z-Ability Buffs all of the best members of this Tag, but before then he complements Fighters that share the Vegeta Family Tag and the Sagas From the Movies Tag perfectly.

He's primarily Blast-oriented, so this Equip lets him deal relevant amounts of Damage.

While being primarily Blast-oriented, he does have Strike Attack Unique Abilities and his primary Teams all prefer Strike Attack, so a double-Offensive choice here is good.

He’s a solid Support Fighter, but he’s inferior in the core over SP SSB Vegeta GRN and SP Goku GRN. Even his Z-Ability is outclassed within these Tags.