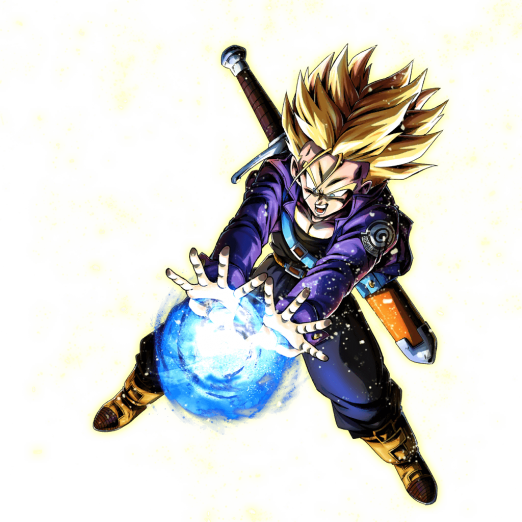 SP SSJ Teen Trunks RED is a Defensive Fighter with a Unique Ability that allows him to greatly reduce any Damage taken from the Enemy when cover-switching for a Teammate.

He brings some Offensive Abilities to the table as well: He can draw an Ultimate Arts Card through his Main Ability.

But while SP SSJ Teen Trunks RED was a formidable well-rounded Fighter in the past, his stats have simply fallen way too far behind due to power creep.

While SP SSJ Teen Trunks RED is no longer viable, his Equips will always remain solid. A future balance update for him coupled with his strong Equip options would make him a very formidable Fighter once again.

Hybrid Saiyans have taken a shift towards being Ranged Fighters, which makes SP SSJ Teen Trunks RED a good bench option if a few key bench Fighters are missing.

He was well rounded on release, but is simply too old to compete in any facet of PVP anymore. Even his Cover performs poorly since his Defensive stats are simply too low to make a difference.

Hybrid Saiyan is a fully established Tag now, and SP SSJ Teen Trunks RED would definitely be a great addition to most Hybrid Saiyan Team Builds on the bench, especially Ranged Builds.

Since he will almost always be used in Strike-based Teams, he can make great use of the Strike Attack Buff from this Equip. However if the plan is to use him Defensively, "I want to fight!" with a Health roll in the last slot is great.

SP SSJ Trunks RED's Strike and Blast Attack stats--as well as his mixed Arts Cards--make him capable of using either one, making this a good option in that regard.

An absolute must-have for any Melee Fighter with the Future Tag.

Everything that made him great before is no longer relevant due to age severe power creep.