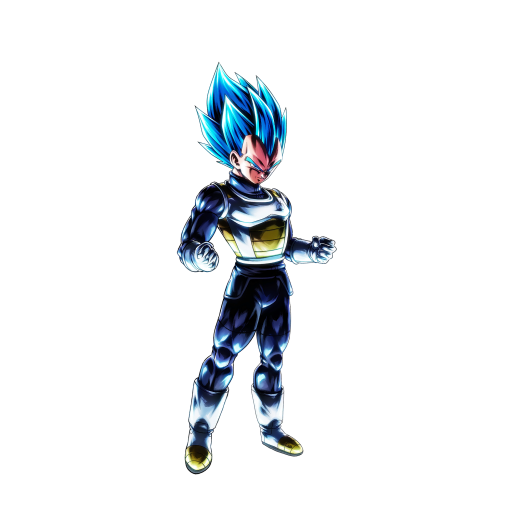 After promising Whis to one day become a God of Destruction, Vegeta began training with the illustrious Angel to go beyond God power. SP SSB Vegeta PUR is from those episodes of the anime.

SP SSB Vegeta PUR's tactics mirror his elitist nature, selecting targets to trap and pummel with his "I'll Destroy You!" Unique Ability, and even preventing Gods from resurrecting with his "Dead End Crush" Ultimate Arts Card. With these two abilities in tandem, Vegeta is more than capable of felling even the strongest Green Defensive Pivots in a single Combo.

Having some of the best Tags in the game, SP SSB Vegeta PUR is an assassin with unparalleled versatility. Vegeta's relevance has waned somewhat thanks to the arrival of various Purple options on his main Tags that somewhat outclass him.

Fortunately for Vegeta, he still carves out a niche as a solid Offensive Pivot with nearly unmatched burst Damage potential. In the current Meta, Vegeta is most famous for being an excellent counter to common Green Fighters like SP SSJ3 Goku GRN, SP SSGSS Vegeta GRN, and especially SP SSJ2 Kefla GRN.

The latter Unique also Restores 30 Ki and draws a Strike Card when SP SSB Vegeta PUR enters the field. He even grants himself +45% Strike Damage at the same time, which enhances the efficacy of his brutal Combos. This is an incredibly useful Ability that allows SP SSB Vegeta PUR to selectively counter his foe.

With intelligent play and prediction, Vegeta can use this Ability to instantly take enemy Green Fighters out of commission, and it establishes him as a supreme counter-pick Fighter.

SP SSGSS Vegeta PUR can hold his own quite well in the neutral game thanks to his Extra Arts Card and his Special Move Arts Card. Vegeta's Extra Arts allows him to counter enemy Blast Arts and begin a Combo, which gives him vital additional utility.

His Special Move Arts comes packaged with a +20% Buff to his Strike Damage for 20 Timer Counts, which keeps his Offensive presence up even after his Strike Buff that is tied to his entrance to the battlefield wears off.

SP SSGSS Vegeta PUR's Ability to draw Strike Arts Cards and restore Ki on entrance to the battlefield has more benefits than it seems.

The amount of card cycle Vegeta facilitates can lead to early and frequent Rising Rushes throughout matches he's a part of, making him one of the best Fighters in the game at capitalizing on his Team's stray hits.

The Card Draw Speed Buff he grants himself factors into this, as he can potentially string together as many as 6 Strike Arts at once with few starting resources.

This is accentuated by his base 8 Substitution Count, which opens up opportunities for frequent Combo extension.

Vegeta has no way of Buffing his Blast Attack Stat, which means that on Blast-oriented Teams, his Offensive prowess is considerably diminished. He's limited by all Cards that are not Strike Arts.

SP SSGSS Vegeta PUR is a Fighter with little late-game potential. Due to the nature of his Damage Buffs, which activate on entrance, he is only truly at his best when he has multiple Allies he can piggyback off of.

Beyond even this, the most important and impactful aspect of his toolkit, his 5 Timer Count Switch Lock on Entrance, only activates twice, so his utility dives off a cliff once it is no longer usable.

SP SSGSS Vegeta PUR is an excellent choice to tank an enemy Rising Rush or Ultimate Arts Card, seeing as he's not a Fighter you want sticking around over his Teammates.

Vegeta can also be fielded alongside some of the Tag's best,SP SSGSS Vegeta GRN and Zenkai 1 SP GoD Beerus GRN, monstrous Fighters who can increase SP SSGSS Vegeta PUR's Damage.

EX Whis RED is of course a fantastic Teammate for the Saiyan, as his Support increases the strength of his already impressive Combos, but his held Blast and Extra Arts Card create a deck that is antagonistic to Vegeta's game plan.

The arrival of SP Super Saiyan God SS Vegeta GRN opens SP SSGSS Vegeta PUR up to a whole new world of synergy, as the Green God bridges the gap between the Vegeta Family and God Ki Tags. Vegeta is a brutal counter Fighter for many of the Meta's strongest Green Fighters, which justifies his inclusion on this Team.

Those two Fighters can be rounded out with SP Vegeta BLU to form one of the most Damaging Team Cores possible, or SP Teen Trunks PUR to double down on the Team's Offensive Support.

Fortunately, through the power of both SP SSGSS Vegeta GRN and SP Super Saiyan Vegeta BLU, who transforms into a brutally powerful Super Saiyan God, the full party can benefit from the original Blue Vegeta's Z-Ability.

Strike Attack for a Melee Fighter and a large Boost to his Defense means this is a must-have.

He relies on Strike Attack as much as any other Fighter in the game, this is a perfect Equip for him, assuming Strike Attack is rolled in the final Slot.

This is tailor made for SP SSB Vegeta PUR. He makes usage of every single stat.