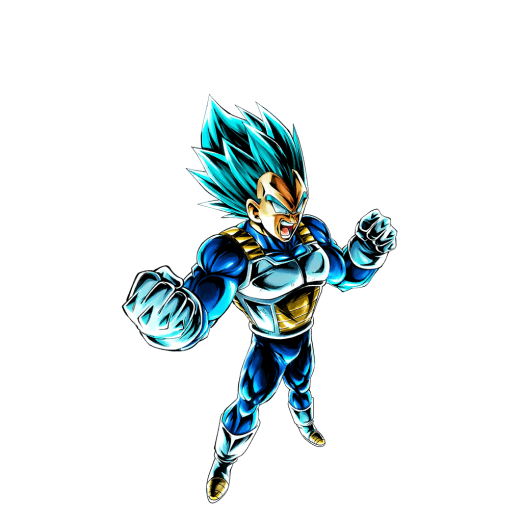 The God of War descends in Dragon Ball Legends, and his arrival is sure to send ripples across the Meta. The cyan deity is the very definition of a snowballing Fighter, accumulating Damage Buffs with every move he makes.

What makes SP SSGSS Vegeta GRN unique among Fighters that gain power as they combo is the fact that he not only provides accruing Damage Buffs for himself, but also for God Ki and Vegeta Family Allies, letting him double as an Offensive Support Fighter.

Even though he is arguably the game’s strongest Combo Artist and Offensive Supporter, Vegeta is far more than that, since he can prove to be quite useful Defensively too with his accelerated Cover Mechanic.

The overwhelming power of This is Super Saiyan Blue!, Vegeta's Unique Equipment, is another superb addition to the total package that is SP SSGSS Vegeta GRN.

SP SSGSS Vegeta GRN is the gold standard for combo-oriented Fighters. The destruction he wroughts creates opportunities for his Allies to enter the fray with a number of +10% Inflicted Damage Buffs in tow, depending on how many Strike or Blast Arts Cards he used before switching, making this Fighter hellish to face.

Even if the enemy switches in a Purple Fighter, Vegeta can simply switch to an Allied Yellow Vegeta Family or God Ki Fighter and retain all of his Offensive Momentum. Vegeta’s ability to retain the upper hand for his Team in exchanges like this is why he functions so well as a leader.

His innate +20% Inflicted Damage to God Ki Fighters plays into this as well, as his absurd Damage becomes astronomically more threatening in that match-up.

SP SSGSS Vegeta GRN’s Main Ability is a thing of beauty, as it not only Restores Ki and draws a Massively Damaging Ultimate Arts Card that restricts Switching, but it boosts his Card Draw Speed by an unprecedented 2 Levels.

This Buff, in tandem with his Damage Buffs that accumulate with every Card he uses, will almost always assure fatally long combos.

Vegeta impresses even when watching his Allies get battered from the sidelines. With every attack his Teammates endure, his Substitution Count decreases, allowing him to enter the fray far sooner than anticipated, with a sizeable +40% Sustained Damage Cut riding shotgun. This utility should be employed sparingly, as Vegeta is still very vulnerable to Purple Fighters when his Cover is active.

In combat, SP SSGSS Vegeta GRN can restore 15% of his Health with his Extra Arts Card - which also permanently increases the Damage of his next Special or Ultimate Arts Card.

The arrogant prince packs no immediate boost to his Inflicted Damage, meaning he must land a couple hits before his Damage reaches absurd levels. The fact that he needs time to get going means that his Special Move Arts Card will deal miniscule Damage in neutral situations and that he’ll need a full hand to truly accelerate his output.

Obviously the prince is a welcome addition to both of the Tags he primarily Supports, but he does not Support his teammates well bench-wise until he Limit Breaks to 3 Stars, at which point he picks up a Strike Attack and Defense Buff for God Ki and Vegeta Family. At 2 Stars, he only buffs God Ki’s Strike Defense, making him something of an Ability Bonus liability at first.

SP SSGSS Vegeta GRN has now become a third option for the God Ki team due to the Zenkai Awakening of SP Beerus GRN and the release of SP Vados GRN completely overshadowing him in the meta.

SP SSGSS Vegeta GRN was once a lock-in on the core for the Vegeta Family team but due to the release of SP Super Saiyan Kid Trunks GRN, SP SSGSS Vegeta has seen his spot as the primary GRN Fighter get stripped away from him.

SP Kid Trunks GRN can do everything he can barring support and is a better unit defensively.

SP SSGSS Vegeta GRN has seen himself get replaced by SP Goku Black GRN on the Future team. SP SSGSS Vegeta not buffing the tag also played a huge role in him getting replaced on the team.

Great for his Ultimate Move Damage as well as Strike Attack. This Equip makes all the important aspects of his Kit better.

This is Super Saiyan Blue!

This unique Equipment that Vegeta alone can utilize significantly increases his Offensive and Defensive prowess. This Equip gives more to Vegeta than 2 normal pieces of equipment would give to any other Fighter.

This Equipment is optimal on the Future Team; it allows this Fighter to further increase his Strike Damage as well as survivability.