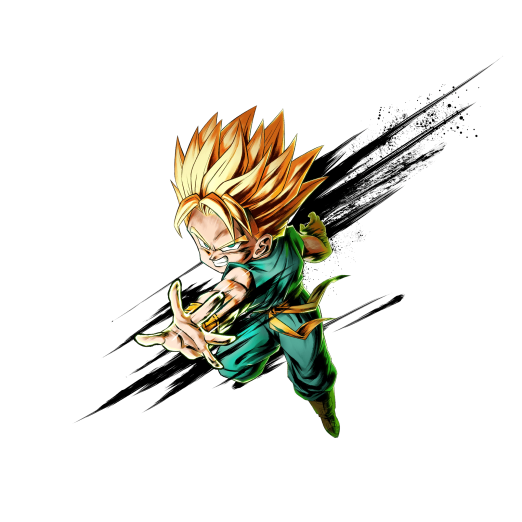 Despite his age, SP SSJ Kid Trunks YEL still has an extremely high Blast Attack. This Fighter was made to land the first hit and sustain a lead with a Vanishing Gauge Recovering Main Ability and Blast Damage Boosting Unique Abilities.
While costly, his Moves are extremely satisfying to use and provide some Enemy debuffs.

With Z-Abilities geared towards the Hybrid Saiyans and a primary Unique Ability that specifically values Goten variants, this Fighter appears to hint at the Hybrid Saiyan Tag getting some more growth in the future.

Despite this, the Tags are still a bit limiting and his Moves and Abilities come with costs that make SP SSJ Kid Trunks YEL more of a lone wolf who will duck out once his Abilities are spent.

As much as this Fighter leans toward the Ranged Fighter archetype, his Buffs aren’t just about increasing damage dealt, but assisting his fellow Hybrid Saiyan Teammates with his Z-Ability, Blast Arts Card cost reduction Extra Move, and hitting Enemies where it hurts--Ki Recovery Speed.

Additionally, in an otherwise Melee Team, this Fighter has the Blast Arts Cards all to himself.

From the start of the match, SP SSJ Kid Trunks YEL’s Innate Power Unique Ability gives him 30 timer counts to deal as much Damage as he can with a 20% Boost to Blast Damage--plus an astounding 40% for the full duration if Goten is on the Team.

Get in enough hits, and this will be plenty of time to charge and activate his Main Ability to keep the Enemy down with a Ki Recovery Speed debuff that literally pauses it for 10 counts. Even if the Enemy switches out, this Fighter is sitting pretty with +75% to his Vanish Gauge Recovery to execute some truly terrifying Combos.

Together or Not At All

SP SSJ Kid Trunks YEL and SP SSJ Kid Goten GRN were released at the same time and complete each other due to Tag limitations. No Team with would be fully optimized with one instead of both.

The Hybrid Saiyan Tag is growing, but it’s still primarily Strike-based. SP SSJ Kid Trunks YEL and SP SSJ Kid Goten GRN have extremely rare Z-Ability Level upgrades that add new stat Buffs at third Level instead of just increasing that of the previous level. This is great, but it essentially means summoning two SP Rarity Fighters at least four times each. That’s a lot and might be more effort than some Players are willing to spend for a killer duo.

While limited, the Hybrid Saiyan Tag looks to be on the rise. With this and SP SSJ Kid Trunks YEL’s first Unique Ability in mind, it’s highly recommended to build a Team around the Saiyan Hybrid Tag and include SP SSJ Kid Goten GRN as these two extremely well together.

Play SP SSJ Kid Trunks YEL for the solo starter that he is and let him use the Blast Arts Cards that would otherwise gather dust. Don’t try to force Range onto the rest of the Team slots in a Tag that just isn’t ready yet.

While this Team Build wouldn’t benefit from his Tagged Buffs, this solo Fighter would gain more from a Team that Buffs him as a Super Saiyan.

He, alongside SP SSJ Kid Goten GRN form an interesting Team with SP SSJ Bardock BLU, as he Boosts fellow Super Saiyan Damage, Critical Rate as well as Critical Damage, allowing for devastating Combos when he is switched out for another Fighter.

Goten’s best buddy is the Blast variation of the dynamic duo. As such, he should be Buffed with a bit more emphasis on Blast Attack.

However his Strike Offense is still respectable and since most Hybrid Saiyan Teams are Strike based, so giving him some Strike Attack Buffs isn’t the worst idea in the world either.

SP SSJ Kid Trunks YEL is a Ranged Fighter with a very weak Strike Defense stat, making this Equip a great option regardless of what the last slot ends up being.

What makes this Fighter great is his Synergy with Goten variants. Sadly, power creep makes that and his once potent Damage potential less viable in the Meta. His dual Z-Ability does make him a nice bench for Hybrid Saiyan and Son Family Teams considering how Blast focused they have become.