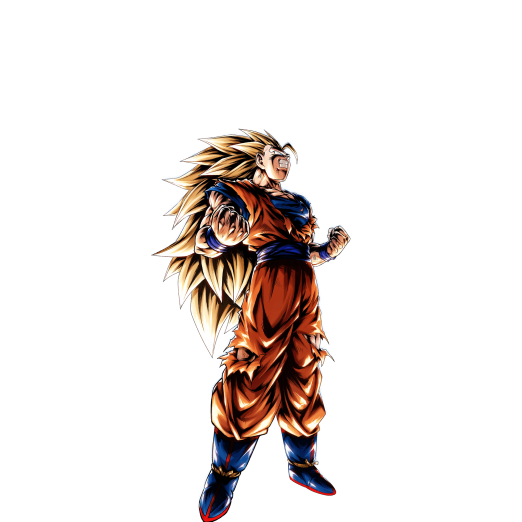 LL SP SSJ3 Goku GRN has received his long-awaited Zenkai Awakening and he has shifted the balance of the meta. His Zenkai Awakening has given him a much-needed power-boost with significant improvements most notably to his Extra Arts and Main Ability/Ultimate Arts. He’s the GRN Fighter that the Son Family and Saiyan tags have longed for. He excels in offense and defense and takes a bit of time to get fully ramped up.

SP LL SSJ3 Goku GRN has one of the most powerful Ultimate Arts in the entire game. He gains type nullification when he uses his Main Ability which is one of the best mechanics to have as it will render Purple Fighters defenseless against his Ultimate Arts. He also heals 30% of his HP which can get up to 40% with the use of his Platinum Equipment. The longer the fight goes on, the stronger his Ultimate Arts becomes, and at the mid-late game, it’s almost a guaranteed K.O.

As mentioned in the Overview, SSJ3 Goku’s Extra Arts: Instant Transmission: Rear Attack got a significant upgrade. Prior to his Zenkai Awakening, he could only chain his Extra Arts with a Special Move Arts card which would reduce its effectiveness. His Zenkai Awakening has made his Extra Arts combo-able into any card in the entire game and it also gives Ki which makes it a fantastic combo starter.

This Extra Arts is also great as it can act as a defensive tool in the tides of battle. Blast Arts are extremely important in initiating a combo in PvP and when SP LL SSJ3 Goku GRN is on the battlefield, he renders Blast Arts useless, which significantly hinders your opponents’ neutral.

Much like SP Perfect Cell YEL or SP Ultimate Gohan GRN, he completely negates any Damage received for the first time he’s sent in via Cover. This puts immense amounts of pressure on the Enemy Team as they cannot safely use a Rising Rush if he’s available on standby.

This is a pivotal aspect of Goku's identity and it must be used at pivotal moments to get the most out of it. If it is used, Goku increases his Substitution Count by 3, so there is opportunity cost inherent to the technique beyond simply wasting it on a a weak attack.

SP LL SSJ3 Goku GRN has some of the best stats in the game across the board. He’s the first untransformed Fighter that has 300,000 Base Blast Attack. He has around 194,000 defense for both Blast and Strike and almost 3 million health which makes him incredibly tanky. His Strike Attack is not bad either, as it almost reaches 280,000. These stats coupled with his Damage passives and Damage reduction make him a huge threat on offense and an immovable Fighter on defense.

Takes Some Time To Get Going

SP LL SSJ3 Goku GRN’s first Unique Ability: “ Fate Rests On This Battle” activates once 30 timer counts have elapsed. This is when he gets access to Card Draw Speed and reduced costs for his Arts Cards. This is a minor weakness.

SP SSJ3 Goku GRN is the main GRN option on this Tag. He also Buffs both Defensive Stats with his Z-Ability when he's limit broken to 3 Stars and is the first GRN Saiyan Zenkai buffer.

He has pushed them over the edge once again as they now have a full-color wheel. His best partner seems to be SP Vegeta YEL as he provides tremendous support to the entire team and SP LL SSJ3 Goku GRN can make very good use of it.

As mentioned in the Overview, SP LL SSJ3 Goku GRN is the main GRN Fighter on the Son Family Team. Even though he loses 10 Ki and 20% Damage when he’s not used with a Saiyan, he still receives Support from SP Z7 Youth Gohan RED and SP Goten YEL. He’s also a Blast-Oriented Fighter which synergizes perfectly with the other Son Family Fighters except for SP Z7 SSJ3 Goku PUR.

The release of this Equip revitalized SP SSJ3 Goku GRN's relevance in the Meta. Its incredible increases to every meaningful Offensive and Defensive stat make it a mandatory inclusion for any serious player using this Goku.

This is a must-have Equipment for Goku on the Saiyan Team, providing a large Pure Blast Buff. On the Son Family Team, I didn't know it was going to be that kind of fight is optimal here.

This Equip makes Goku even more insufferable to fight against, greatly boosting his durability as well as his Heals, additionally when paired with SP Yel Angel Vegeta.

SP SSJ3 Goku GRN was a bit underrated on release. While seemingly “balanced,” he’s still an exceptional all around unit that has a ton of durability, and a nuclear bomb Ultimate that’s hard to survive.

He still possesses his Cover:Rescue which puts a lot of pressure on the opposing Team. Most importantly, his Ultimate Move  -- supplemented by his Main Ability nullifying color disadvantage -- is now one of the hardest hitting Ultimate Moves in the game. Not many can afford to stand in it’s way, especially if he’s managed to build up some Buffs via his “Thank you, Dragon Balls!” Unique Ability.

Hey does anyone know if this is a good enough movie saga team for pvp?
https://dblegends.gamepress.gg/team-builder#sp-turles-yellow#2&sp-full-power…
Max Friendship Rank on DB Legends
So guys I am new around this parts and been playing DB Legends from past 2 months and…
Friendship level 2021
Hello, All information about Story are wrong now (like 2-1-9, does not exist, stop at…
"Another one bites the dust" | A Co-Op Extreme Frieza Guide |
Here we are again with another Co-Op Extreme battle, with the character that…
This is now the genshin section
fischl deniers will be fined 11 posts - 4 participants Read…
Read More