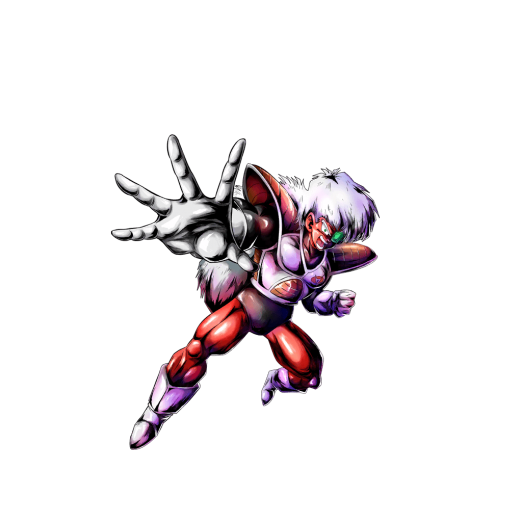 EX Jeice RED is a budget Fighter provided to all players courtesy of the Ginyu Force Special event,. EX Jeice RED is a Blast specialist, much like the Fighter he pairs best with, Golden Frieza GRN, Frieza Force’s best Fighter. EX Jeice covers his master’s weaknesses and can utterly decimate foes that underestimate his burst Damage potential.

However, the arrival of SP Goku Ginyu RED as a F2P Fighter cut EX Jeice RED off both Ginyu Force and Frieza Force.

EX Jeice RED is a Fighter that thrives early. He boasts a 45% Blast Damage Boost at Battle start, and he arguably becomes even stronger once one ally of his gets Defeated, since he basically replaces a 15% Blast Damage Buff with a +1 Arts Draw Speed and +30% Ki Recovery when that happens. This is a beneficial trade, since being able to use more Cards raises his average Damage output, and it’s also good for Dragon Balls gaining.

When he’s the Last Man Standing, he gets a +2 Arts Draw Speed Boost overall, but at that point his Blast Damage becomes too low, and anyway his Ki Recovery is too low to let him use all the Cards he manages to draw during a Combo.

SP Goku Ginyu RED overrides him in both Ginyu Force and Frieza Force, as he’s free and plain better as well.

He's been decent for a while on this Team, but there is no reason to use him now that SP Goku Ginyu RED has been released for free.

Just like for Ginyu Force, the presence of SP Goku Ginyu RED closed all the doors for the poor EX Jeice RED, which however still remains a great bench option if he's 5*.

His signature Equip is sensational with 15% Health and 20% to both Attack stats.

With Ginyu Force not being as great anymore, he's bumped down to Tier 2. His Z-Ability is still excellent.

Character Concept LF Ultra Instinct Omen (Sign) Goku
(someone please do the stats) Type : Melee Color : Yellow Tags : Saiyan, Son Family,…
This is How Many Crystals to Save for Gogeta Blue (when he comes)
Okay so with all the speculations and hype for Gogeta Blue dropping probably around…
Which team should I use?
The initial one which I was using was sort of a Fusion Warrior/Future build and this…
Help for a Future Team
Hi, I’d like to know if my future team is optimized or i need to change something…
New Team Advice
Hi I made a topic about god ki but I realized that fresh team recommendations from you…
Read More