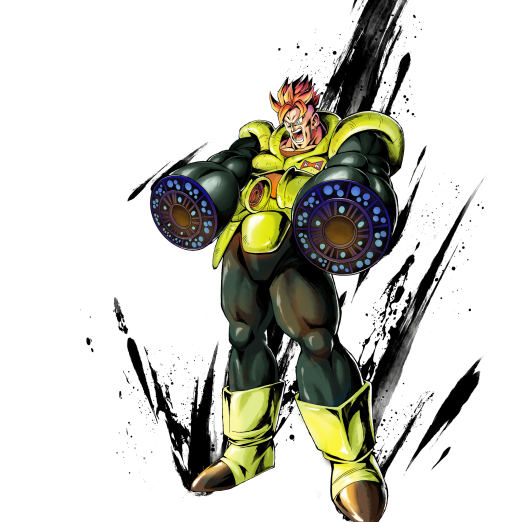 True to his usual representations in Dragon Ball videogames, SP Android #16 GRN is a Tank Fighter capable of withstanding huge amounts of Damage.

Focusing more on Strike Damage and completely ignoring Blast Attack, it’s heavily discouraged to run him in Teams that is more Blast focused.

The last thing to note about this Fighter are his Self-Destruct Abilities. Unlike Fighters with similar Abilities, SP Android #16 GRN always deals a set amount of Damage.

Like many Defense Fighters, SP Android #16 GRN possesses the Cover Unique Ability, which lets him take reduced damage when using over change.

He also possesses an additional effect that allows him to recover 50% of the Damage taken and instantly recover his substitution gauge.

All in all, this is an interesting Ability that brings a lot of Defense utility to the entire Team.

SP Android #16 GRN has high Health and Defense values. When combined with his Abilities, he’s able to Tank really well and in almost any situation.

As a bonus, he cannot be affected by abnormal conditions either.

Although this move can deal a great amount of Damage with the potential to kill an Enemy in one go, it also means the Player loses a whole Fighter themselves.

This makes him a little weird to use and Combo with. It's not a "true" weakness--more like a double-edged sword--it heavily depends on timing. Regardless, a regular Ultimate Move would've been way easier to use.

It’s also important to keep in mind that due to power creep, landing Self-destruct does not guarantee a kill anymore.

SP Android #16 GRN has downright ignorable Blast Attack, making him very predictable in terms of his Offensive capabilities. He must be used in a Team with little to no Blast Arts Cards to make him do any Damage whatsoever.

This is the choice if Strike Attack is rolled in the last slot, also provides 16 with additional survivability through Pure Strike Defense.

I will crush you!

#16’s durability is still excellent, just not needed as much as before. #21 GRN has access to 2 Cover: Rescue’s, the other Zenkais on the Team can act as a pseudo Defensive pivot due to high base stats, and SP Perfect Cell RED definitely doesn’t mind eating Rising Rushes in his base form. The blast-heavy deck also lowers his Damage output, which was already an issue for him.

While still a good tank, SP Super #17 GRN just kicked him off the core for good.