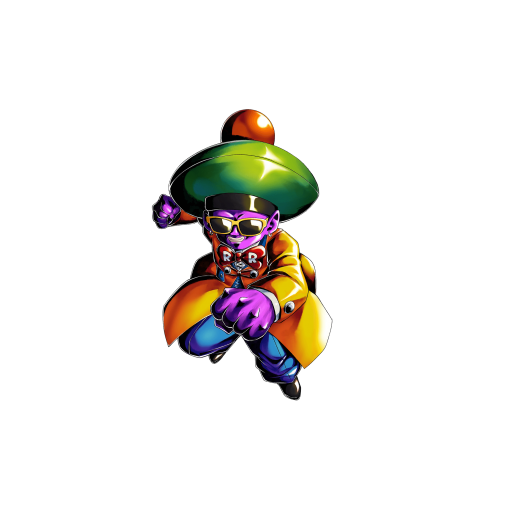 The shortest of the Androids must resort to some particular tricks in order to be useful in battle. In fact, his Supportive Abilities are his biggest strength, and he can also be useful Offensively if used properly.

His problem is that Androids didn’t need another Purple Fighter, since SP Android #17 PUR already covers that color very well on that Team’s Core, to the point SP Android #15 PUR cannot manage to unseat him.

SP Android #15 PUR’s Supportive Abilities are something new for Androids in general. Not only is he able to Boost his teammates’ Damage and lower their Blast and Strike cards’ cost  by getting switched out, he also has a useful Cover-like Ability that allows him to take reduced Damage when getting switched in.

Additionally, his Special Arts permanently Boosts the whole Team’s Blast Damage on its second use, an Effect which is very easy to activate considering he draws an Extra Move when he gets switched in up to twice.

For what it's worth, SP Android #15 PUR is a quite decent Support Fighter overall.

His Main Ability potentially allows him to pull off a very long Combo. While his Damage is poor, this Ability remains beneficial because it permits to farm Dragonballs for a faster Rising Rush. It can also be useful to stall the opponent for a bit longer if SP Android #15 PUR’s allies are unavailable to be swapped in.

While SP Android #15 PUR is not bad, he can’t replace what SP Android #17 PUR brings to the table. In fact, the latter’s Tankiness is Androids’ current trump card, so removing him would mean changing the shape of the Team. While SP Android #15 PUR’s addition would make the Team’s Damage output more consistent, that just isn’t enough for him to be worth a spot on the Core.

The same applies for the Bench. He has a good Z-Abilities, but Androids are top notch in that regard, so he can’t even find a spot there. Despite all that, he’s only to be considered an alternative options for both roles.

He synergizes quite well with this Team, but he’s nothing more than an Alternative Core Fighter.  For what it's worth, he makes for an excellent partner for every Android 13 variant. SP Android #13 BLU, EX Android #13 RED, and SP Fusion #13 RED all appreciate his Support capabilities.

Using SP Android #15 on this Tag may seem like an odd fit at first, but an internally synergistic Android-based Sagas From the Movies Team is possible thanks in part to his existence. SP Android #15 can be used with SP Fusion Android 13 RED and SP Full Power Boujack PUR to create a resilient and dangerous core.

This Equip greatly increases his tanking potential, as well as his Special Move and Blast Damage, which can make him more dangerous in single combat.

Must-have for any Android that can use it.

This Equip continues the theme of trying to help bolster his lackluster Offense, but if the goal is to increase his durability to pass on as much of his Supportive qualities as possible, No Way… is the choice.

The release of SP Super #17 GRN gives a lot more appeal, as he can seemingly spam Extra Moves. The first of which Debuffs the opposing Fighters Blast Defense, followed by the second Extra Move used giving his Teammates 25% Blast Damage permanently.

From that point on, his Extra Move will continuously increase Enemy Blast Arts cost by 3, which can flat out cripple them.