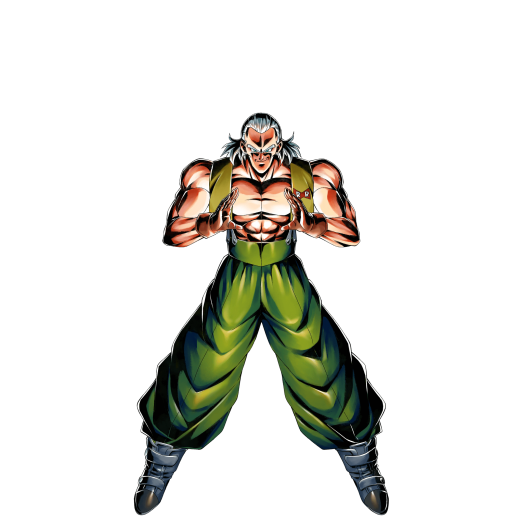 SP Android #13 BLU  arrived and gave Android Teams an extremely powerful Blue Fighter at long last at the time of his release, but has since been replaced by SP Android #21 BLU

He doesn’t Transform into his full power form, but he’s still strong enough to compete with the top Fighters in the game due to his exceptionally high Blast Attack and Damage inflicted Buffs when his Teammates start dying.

It is this Crisis potential of his that gives him a place on the Android Tag Team. He is an excellent Mid and Late-Game Fighter with a somewhat conflicting but solid toolkit that will keep him somewhat relevant on the Android Team as long as he can be paired with strong Fighters.

This Unique Ability is what makes SP Android #13 BLU so strong straight away. It gives him 50% Blast Attack every time he enters the battlefield, reduces his Blast Arts cost by 5, and gives him 35% Ki Recovery Speed.

This requires him to be paired with an Android Fighter, but this is a given anyway, he should always Fight alongside his cyborg comrades.

Even if his Android Teammates start going down, he’ll receive a Damage inflicted Buff and restore his own Health by 10% every time he enters the battlefield per defeated Android.

To top it off, he inflicts 25% Damage to any Goku variant. This will make him relevant for quite a while, and especially helps against the popular SP SSB Goku BLU

SP Android #13 BLU isn't just a Damage dealer, he does many things that can help his Teammates as well. His Main Ability gives his allies 25% Blast Damage for 15 timer counts, his Extra Move seals an Enemy Card slot, and his Special Move reduces Enemy Ki by 50.

He fits a standard Android build perfectly, as they cripple the opposing Team and deal out tons of Damage in return.

SP Android #13 BLU is an excellent Ranged Fighter with some deceptive durability, but his Strike Attack is lacking. Outside of a Damage Inflicted Buff when a Teammate dies, his toolkit does nothing in the way of helping him there.

The fact that his Damage Buffs require living Android Teammates conflicts with his Crisis Buffs as well, resulting in a Fighter that somewhat handicaps his own secondary utility.

Androids are clearly his best Team, and a number of Team cores greatly appreciate what SP Android #13 BLU brings to the table.

Because all the Goku Hunter is bringing is Damage and secondary Crisis Utility, it is best to pair SP Android #13 BLU with Fighters that can make up for his lackluster Defense, like SP Fusion #13 RED, SP Android #17 PUR, or SP Super #17 GRN.

While it is difficult to fit SP Android #13 BLU on this Tag Team, it is more than possible thanks to the number of Android Fighters that possess this Tag. Android #13 synergizes very well with SP Full Power Boujack PUR, as Boujack protects Goku’s #1 Hater from enemy Green threats.

An excellent third member for this Team is SP Fusion Android 13 RED, who can act as a Damage Dealer and a disruptor with his Cover ability.

The extra Special Move Damage isn’t really significant here, but the monstrous Boost to Blast Attack and Damage to Saiyan for 20 timer counts makes this essential.

If Saiyans are not too big of a problem, ...it seems we miscalculated. is a good replacement.

15% Boosts to both Attack Stats and the ever-important Strike Defense make this essential as well.

A Boost to both Attack Stats and Health is an exceptional option here.

SP Android #13 BLU is a bit of a one dimensional Fighter as he’s almost entirely Blast oriented, but he becomes truly terrifying when his Teammates are killed. He also has a Unique Ability that inflicts more Damage to Goku variants, which will always be relevant and is especially useful considering how popular he is.