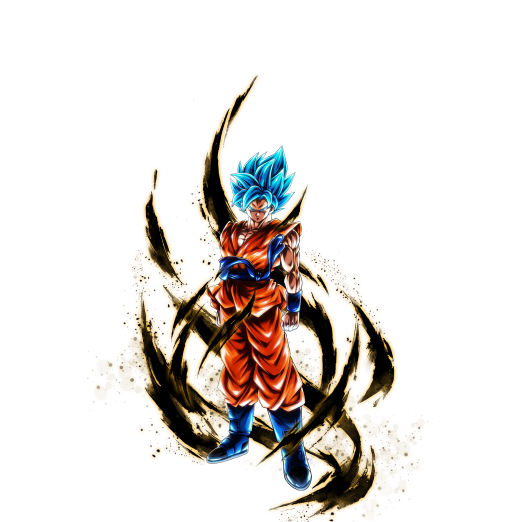 SP SSGSS Goku’s Zenkai Awakening has made him reach new heights in Dragon Ball Legends. With a combination of Defense, Attack Power, and Support Abilities, SP SSGSS Goku BLU is a unit to be feared in the meta-game.

He excels in Defense for the first half of a battle and then becomes an offensive juggernaut in the later stages of a battle.

SP SSGSS Goku’s Zenkai has boosted his stats to astronomical levels. With his 35% Damage Reduction which cannot be reduced, combined with his Zenkai stats, SP SSGSS Goku BLU can now tank any combo in the early stages of a match.

His Special Arts - “The real fight starts now” gives him additional survivability due to the healing it provides.

SSGSS Goku's trump card Main Ability is a rather simple combination of effects - it draws his Ultimate Arts Card, which not only deals Massive Damage but also enhances itself before activating, and it fully Restores his Vanishing Gauge.

The momentum swinging potential of this Ultimate attack is so extreme that it can win games by itself. Goku can take advantage of these effects in tandem to trump any enemy action, even Rising Rushes, with the foresight provided by that split second of Main Ability activation.

SP SSGSS Goku BLU always thrived in the later stages of a match, but now, his Zenkai has amplified it to levels that are only surpassed by Zenkai Father-Son Kamehameha Gohan. His “Now we’re really fighting!” and “The ultimate saiyan” unique abilities give him Damage buffs the longer a fight goes on and as such, make him one of the hardest hitting units down the stretch.

The Support of Gods

SP SSGSS Goku BLU now gives support to allies for every strike and blast card that he uses which is reminiscent of SP SSGSS Vegeta GRN. This is one of the best types of support in the game because as long as SP SSGSS Goku BLU is alive, he will continuously provide his teammates with more damage.

Takes Awhile To Get Going

It goes without saying that they designed SP SSGSS Goku BLU to primarily be a late-game fighter. Due to this, he doesn’t provide much on the offense in the early stages of a match but can make up for it by supporting his teammates.

SP SSGSS Goku BLU is a fantastic lead for the Top God Ki team and continue’s to excel as one of its core members. He synergizes incredibly well with the likes of SP Beerus GRN and SP Ultra Instinct Goku PUR. He’s the defensive anchor for the team, which compliments SP Ultra Instinct Goku quite well. His team-wide support gives his allies more damage and is the team’s best fighter in last man standing situations.

While still a good fit here, he should only be used in the core if the Player is missing SP Angry Goku BLU who will likely be mainstays for the Tag for quite a while.

This is excellent for a large boost to Goku's HP as well as buffing his Blast Attack with additional DMG to Hybrids who pose a great threat in the current meta.

He’s categorized as a Ranged Fighter but his Strike Attack is just as good. This Equip is excellent because it patches up his Blast Defense, which is slightly worse than his Strike Defense and gives him Strike Attack to go along with it.

There are various choices for the final slot, this Equip boosts Goku's Blast DMG output as well as his Special Move. Alternatively, Hurry, Vegeta! can be used here to greatly increase Goku's Blast DMG through a Pure Buff, however he needs to be ran alongside other Saiyans.

He operates pretty similar to his release. Granted the landscape of the game is much different, but he's still exceptionally well rounded. He's extremely resilient, hard to catch with his Main Ability recovering his entire Vanish Gauge, his Ultimate Move is devastating, and he's great late game as well.