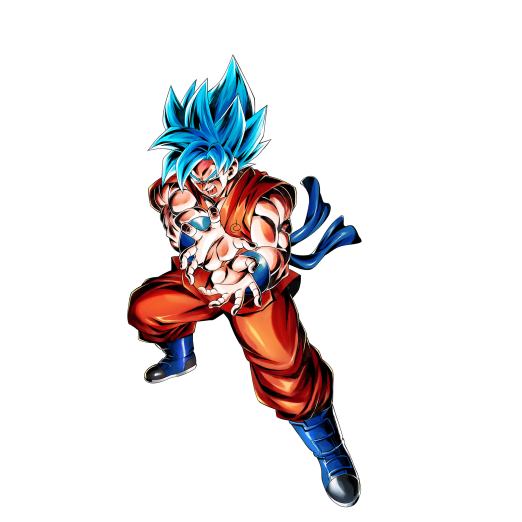 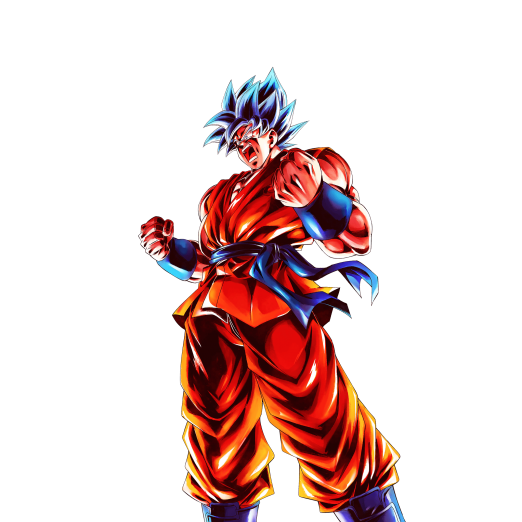 Goku is a simple man. When he is faced with adversary, he sticks to what he knows and what he knows is tenacity and resolute strength, so when he finds himself against the mysterious assassin Hit and his Time Skip, Goku powers up his Super Saiyan Blue form with his tried and true Kaioken. True to the anime, this amalgam of his newest and oldest power ups comes with a toll. SP SSB Goku YEL becomes an absolute force on the battlefield while his Transformation is up, but quickly becomes stagnant, even a liability once it is over.

Being a Goku variant, SP SSB Goku YEL naturally has access to a plethora of Team and Equipment options. Son Family welcomes the addition of a new Yellow Fighter, as well as God Ki and Saiyan. SP SSB Goku YEL pairs well with his Blue counterpart, SP SSB Goku BLU quite well. Both Fighters are capable of instantly restoring their Vanish Gauge and dealing dangerous amounts of Damage. SP SSB Goku YEL also forms quite the duo with his rival Fighter he was released with, SP Hit YEL.

When SP SSB Goku YEL Transforms into his Kaioken form, his stacking Buffs become nearly uncountable. He is truly a tour de force, building Strike, Ki Recovery, and Damage Reduction Buffs passively, and that's not even mentioning his powerful Extra Card, which restores Ki and powers up his Special Attack, reminiscent of both SP SSB Goku BLU and SP Gogeta BLU. While Transformed, SP SSB Goku YEL can put a dent in nearly any opposing Fighter who does not directly wall him like SP Vegito RED.

Twice As Bright, Half As Long

As devastating as his Offensive potential is while he is Transformed, he quickly becomes a liability once his Transformation is spent. He raises his own Cost of both Strike and Blast Arts Cards after Kaioken ends, which does not bode well for the future of SP SSB Goku YEL, as Fighters with innate drawbacks tend to fall out of the Meta quickly -- namely SP SS Goku YEL, SP Majin Vegeta RED, and SP Super Trunks GRN.

On top of that, his Transformation does not last very long at all, and he requires near perfect conditions to maximize his Special Move Damage within a short window of opportunity.

SP SSB Goku YEL seems to shine the most when paired with SP SSB Goku BLU as their kits are complimentary. Both Fighters can instantly restore their Vanish Gauges and gain Offensive and Defensive Buffs throughout the battle. On this Team, he operates as a finisher, saving his Kaioken for the latter part of the battle to minimize the post-Transformation downsides.

The third partner of this Team could easily be swapped out for SP Hit YEL, forming a powerful Yellow Color Counter Team.

Due to Son Family’s late-game focused playstyle, players using SP SSB Goku YEL on the Tag are incentivized to activate the Kaioken as early as possible, letting him deal heavy damage early in the match and enable Son Family’s roster of Crisis Fighters when he inevitably powers down.

He's a Melee Fighter but an Offensive powerhouse in general, this Equip is great because of the Strike Attack emphasis.

One of the better choices for any Melee Fighter with the God Ki Tag.

One of the best for a Melee Fighter.

SP SSBKK Goku YEL is an underrated Fighter, but still must be used wisely. He’s exceptional when switched in and after Transforming, but his Transformation is very short. After it expires, his Strike & Blast Arts cost increases by 15 for 20 timer counts, and his base stats in his original form are very low as well.

Still, while he's in Kaioken he has some mind-bogglingly high Strike Damage. The release of  SP Super Saiyan Rosé Goku Black RED and SP SSG Vegeta GRN have made him and his Team much more enticing. He synergizes very well with these two.