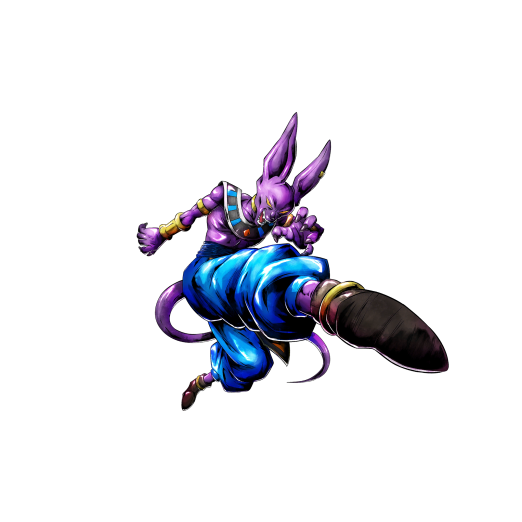 EX GoD Beerus YEL was released alongside wave of other God Ki Fighters and competes with them in a distinct niche - being a Blast-oriented Yellow Fighter with some serious Damage potential.

Beerus is a really strong Offensive Fighter, and his Card destruction gives him a tactical advantage, but his Defenses are wanting; they really let him down.

EX GoD Beerus YEL lacks staying power, and will likely only be seen on the Bench of new players' God Ki Teams.

This is perfect for stopping an Ultimate Move Combo before it even starts. Because this Card can be utilized by his other teammates, any Team that includes EX GoD Beerus YEL will have some disruption capabilities.

This Fighter can deal tons of Damage, which further increases the longer he’s in Combat. He also gets a stacking 20% Damage Buff anytime the Enemy uses a Strike or Blast Arts Card.

This means EX GoD Beerus YEL can potentially take out his Enemy with a single Combo if he’s able to withstand one first. The cumulative buffs he accrues let him output surprising Blast Damage, but this utility is limited given how weak he is defensively.

The biggest problem with EX GoD Beerus YEL’s toolkit is that it relies too much on withstanding Enemy Combos and staying in Combat for an extended period of time.

His Health and Defense stats aren’t high enough to guarantee that can happen. His Z-Ability offers no Defense Buffs and his Equip options are quite limited, so he will rely heavily on Team Support.

The God Ki bench does assist him in this regard, but the Team typically cannot afford to devote a slot to a unit as limited as EX GoD Beerus YEL

His Z-Ability gives a pretty significant Boost but it only Buffs one stat, so he won’t be much use on the bench if he doesn’t make the core. Beyond that, his stats limit him to one Team and few Equips.

God Ki got a sudden increase in Fighter’s making it a completely viable Build option. While this is great news for EX GoD Beerus YEL, he’s by no means a first choice on the core.

Beyond EX Whis RED, the Team doesn’t have much Support, so EX GoD Beerus YEL will be the weakest link in most scenarios. Because of his awful defenses, any team running him is incentivized to use SP Super Saiyan God SS Goku BLU to cover for him.

EX GoD Beerus YEL is almost entirely Blast-focused and needs to be optimized as such.

Know What That Means?

This is the only Equip left that gives Blast Attack.

EX GoD Beerus YEL has a somewhat similar problem as EX Mai PUR in the sense that he has a good toolkit, but is increasingly hard to bring along due to an anti-Synergistic Z-Ability in a crowded Tag.