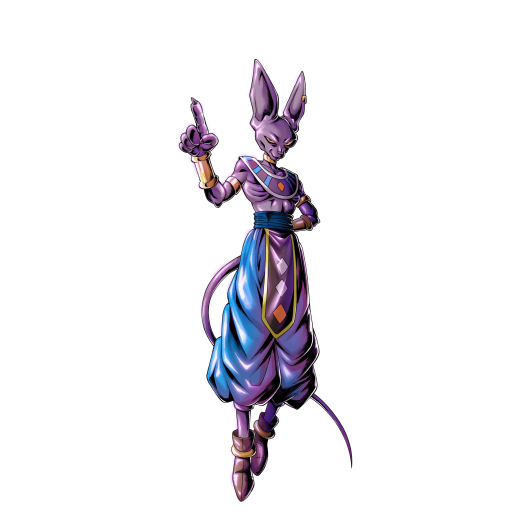 SP GoD Beerus GRN was always lagging behind the other Fighters in the meta. Upon release he was Team-less; the God Ki Tag he spearheaded alongside SP Super Saiyan God Goku RED never came together in time for him to see Core usage.

God Ki has since become an incredibly dominant Tag in the metagame, and it was only supplemented by the return of its progenitor via the Zenkai Awakening System. Zenkai 1 SP Beerus GRN is not significantly different on paper, but three elements of his Kit have been enhanced that make him a serious threat.

For one, he now possesses a generic Inflicted Damage Buff when entering combat, which gives him very high average Damage and value as an Offensive Pivot.

His Main Ability is frankly absurd now, as it packages amazing effects with an Ultimate Arts Card Draw. Taken together with Beerus' Inflicted Damage Buff at base, this Ultimate has the potential to destroy most foes.

These Abilities are strong, and definitely justify his placement on God Ki Teams, but they're not the most remarkable weapon in the God of Destruction's arsenal. His Extra Arts card negates enemy Buffs not one, but three times per match, completely shutting down match-ups against Fighters that rely on permanent, visible Buffs.

Now that he has received the power he deserves, Zenkai 1 Beerus is a powerful option for any God Ki Team.

This can delay some seriously game-changing Main Abilities and entire strategies in PVP due to the 10 Timer Count duration of this effect.

Against Fighters with Abilities that require Transformations to truly begin to dominate like SP Super Saiyan Gohan YEL and SP Angry Goku BLU, being able to delay their gameplan progression can be game-winning by itself.

The Power Flick Extra Arts Card can utterly dominate the end-game of matches with its 3-time Buff Purge effect. Not only does it purge visible Buffs, it effortlessly chains into Combos and inflicts targets with +35% Blast Damage Received Debuffs, making it one of the most powerful Extra Arts Cards introduced.

Beerus should be brought into combat against any Team that uses Crisis Fighters. His utility is entirely encapsulated by this Card and it's the reason why he's brought over competing Green God Ki options.

The newly awakened God of Destruction's Main Ability gives him a 20% Heal, an incredible +50% Blast Damage Buff, and one of the most deadly Ultimate Arts Cards in the game, seeing as it sports a Massive multiplier.

Chaining this into a Combo almost guarantees lethal damage against Type Neutral opponents and obliterates the foe's hand in the process.

Being a God Ki Legendary Finish Fighter, Beerus gets access to multiple Awakened Equips, including his own personal Awakened Equip that rockets his Offense and Defense to absurd levels.

The generic God Ki Awakened pieces of equipment are also superb when utilized by the God of Destruction. There are many Fighters who envy Beerus for this reason - he arguable has the greatest suite of equips in the game.

Destruction is a Two-way Street

Beerus' menace has always been his sub-par Defense, which is somewhat mitigated by his massive Zenkai Stats, but is still a persistent issue for the God of Destruction. Beerus needs Defensive Teammates to truly feel safe in combat.

His Main Ability provides a nifty 20% Heal, but he is still Defensively wanting. He relies on the prowess of God Ki's Defensive Pivots to last long in battle, and his Buff dispelling utility shines in the late-game.

Beerus' Damage is fairly high by himself, but he really needs the assistance of his attendant EX Whis RED to truly spread destruction.

Whis' Support grants him massive Buffs to his Offensive stats in-combat, including +30% to his Ultimate Arts Damage which all but confirms that the two are meant to be used in tandem. Whis' presence also graces him with a flexible Heal and a steady source of Extra Arts Cards.

The two of them are strong together, but the necessity of Whis limits Zenkai 1 SP God of Destruction Beerus GRN's versatility on the God Ki Tag.

God Ki is where Zenkai Beerus belongs. He's a fixture of the Team's bench with his Buffs to both Blast Defense and Blast Attack, and his Zenkai Ability turns the Tag's best Fighter, SP SSGSS Vegeta GRN, into an immaculate paragon of Offense and Defense.

Beerus pairs perfectly with his attendant EX Whis RED, whose Support turns Zenkai 1 Beerus into an absolute monster of a Fighter. Whis Buffs every feasible Offensive Stat for Beerus, and in turn Whis Buffs himself when Beerus is present.

To protect the Team from enemy Purples that pose a threat to the Destroyer God, SP SSGSS Goku YEL is a flexible Offensive option with some unique combat utility via his Transformation.

These are far from the only Fighters that excel alongside Beerus. SP Super Saiyan Rose Goku Black RED, SP SSGSS Goku BLU, and even the Defensive juggernaut SP SSG Goku PUR can act as solid Teammates for him - each offering some Offensive and Defensive flexibility.

This Equip may be more Strike Focused than Blast Focused, but it does provide some serious firepower for the God of Destruction. The added Defense it provides doubles down on Beerus' impressive Zenkai Stats as well.

Awakened Truth of the Survival Game No. １

His very own exclusive Equip is arguably the best piece of Equipment in the game. It isn't just broken Defensively, it upgrades his Ultimate Arts into something truly spectacular.

Beerus is still a solid God Ki choice who has actually aged very well considering his release was what seems like an eternity ago. The seemingly age-less Beerus also works very well with SP SSBE Vegeta YEL, breathing new life into him and giving him  even more incentive over the fragile SP Vados GRN.