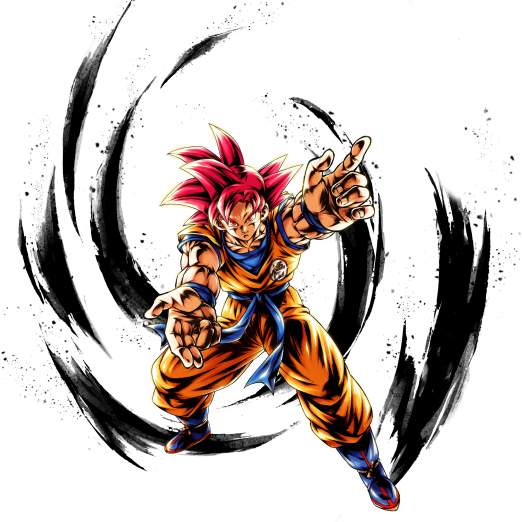 SP Super Saiyan God Goku PUR is an exceptional Fighter and a welcome addition to the God Ki Tag. Goku functions as an unconventional Defensive Pivot and Offensive Support Fighter, though his own Damage can be something to fear in certain conditions.

Goku’s Defensive potential comes from his plethora of Combo-negating abilities, notably his scaling Sustained Damage Cut Buffs that accrue as he takes Damage, and his All Arts Cost Up Debuff he applies when changing Cover.

The Saiyan raised on Earth isn’t wanting in the Offensive Department after taking some abuse, as he gains Damage Buffs whenever he witnesses an enemy use a Strike/Blast Arts or as when he evades an Enemy attack.

SP Super Saiyan God Goku PUR has one particular ace up his sleeve that elevates him, the God Bind, his Extra Arts attack. This Blast-Armor possessing charging technique provides an absurd suite of effects that only serve to bolster his value on God Ki Team compositions.

Goku’s versatility and power in the neutral game are what set him apart from most Defensive Fighters.

SP Super Saiyan God Goku PUR tears through Enemies who attempt to strike his allies with a nasty +25 Arts Cost Increase on Cover, which will likely allow him to pick up a Damage Buff or two from the foe he switches into the onslaught of while keeping his Health at safe levels.

This impactful Ability even effects Ultimate Arts Attacks, so if a player keeps track of the amount of cards the foe has used, swapping Goku in before the finisher is activated can potentially prevent its usage.

Goku’s Main Ability deserves a special acknowledgement, as it not only Heals Goku and draws his near-perfect Extra Arts Card; it also removes all Attribute Upgrades from the Enemy he’s facing.

Against certain Crisis Fighters and Enemies that build up their Offensive prowess over time with accruing Buffs, this utility is crushing and game-ending. Saving this Main Ability for the end of a match can guarantee a win against many Tag Teams that rely on Crisis Buffs or permanent, visible Buffs for Damage.

This magnificent Extra Arts Card deserves an entire section dedicated to it. The God Bind is arguably the best Extra Arts Card in the entire game, and its power can instantly swing the momentum of the match in Goku's Team's favor.

It can be safely drawn at mid-range with Goku's Main Ability and activated safely to trump any enemy option or drawn during one of Goku's Combos to either guarantee a Rising Rush on a problem target (as enemies cannot change cover while Immobilized), or give Goku's Team some time to reorient its order if priority has been lost.

No single Card in Dragon Ball Legends can be considered an "I win" button, but God Bind is probably the closest to being one out of every Extra Arts Card so far.

Goku’s role isn’t to shred thought his Enemies, but he does have some use as a Damage dealer when he can dodge a foe or after he sees the Enemy bust out a Strike or Blast Arts. Goku somewhat fails as an Offensive Pivot though.

He has difficulty doing Damage to Enemy Greens when switching in during an Ally’s Combo, unless he has access to God Bind.

Despite his Defensive Abilities, Goku has trouble surviving a Rising Rush. Goku’s power as a Cover-change tank is derived from the Arts Cost Debuff he inflicts on his foe, but unfortunately, the Rising Rush doesn’t require any Ki, leaving Goku vulnerable to it.

He still racks up Damage Buffs when Combo'd by those Fighters, but players using Goku must use discretion to decide when the best time would be to switch him in.

Goku fits superbly onto God Ki as its best Purple Fighter, edging out the previously dominant SP Super Saiyan God Super Saiyan Vegeta PUR. The God Ki tag is enormous at this point, and tons of its best Fighters can Support Goku.

EX Whis RED is the obvious choice to run alongside this Goku, as his steady stream of Extra Arts Cards will significantly increase the uptime of God Bind.

SP Super Saiyan God SS Vegeta GRN, on the other hand, directly contributes to Goku’s Damage through his incredible Offensive Support. This trio is just one way to build a Team that plays to Goku’s strengths.

Any combination of the aforementioned Fighters can create a scarily powerful Team - SP Super Saiyan God Goku PUR is the icing on the cake.

SP SSG Goku PUR is a reliable Purple option for this Tag Team if any player seeking to build it is missing SP Full Power Boujack PUR. While his Z-Ability does nothing for the vast majority of this Team's best Fighters, his Abilities in combat are stellar enough to justify his inclusion on it.

Goku can provide Extra Arts Cards for the ever ubiquitous SP Super Saiyan Youth Gohan YEL, who can bypass the neutral game with them.

With Offensive Support from Fighters like SP Hero Tapion RED, Goku's potential as an Offensive Pivot shoots through the roof.

While Goku is clearly an unconventional choice for this Tag, he proves his worth on it via his toolkit's synergy with its many great Fighters. He's worth considering on any variant of the Team that balances high Offense with even higher Defense.

This is the classic Ranged Saiyan equip and it is no less amazing on SP Super Saiyan God Goku PUR. The additional Health and Blast Attack both supplement Goku's playstyle. The extra damage to Hybrid Saiyans is, as always, a nice bonus, but it isn't why this equip is so lauded.

This provides Goku with a sizeable boost to both of his Defensive Stats and his Strike Attack when he is deployed alongside God Ki Fighters.

SP SSG Goku PUR has a lot of niftiness in his toolkit. From utility, to support, to durability, to some scaling Damage, he’s a nice addition to an already powerful Tag. It’s quite a shame SP Fusion Zamasu PUR and SP SSGSS Vegeta PUR have the same color, because SP SSG Goku PUR is still phenomenal. He just simply fits the Tier 3 description now.