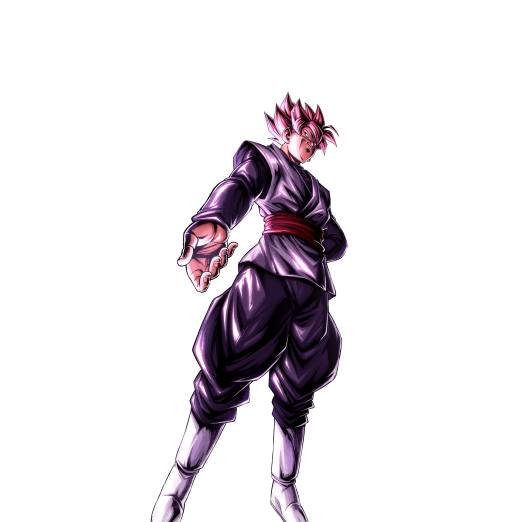 Rose Goku Black has finally received a Fighter of Legends Limited Rarity. There is some controversy concerning his color as most of the player base wanted him to be RED.

LL SP Rose Goku Black PUR can be described as a disruptor of sorts, whose Strike Arts and Blast Arts aren’t meant to do damage, but his Ultimate Arts, Special Move Arts, and Extreme Bleed are.

Defensively, as with all LL Fighters at two(2) stars, he falls short in this area.

This is a powerful ability as most players use a Fighter with endurance to tank an incoming Rising Rush, Ultimate Arts, Combo but this won’t be effective against Black.

LL SP Rose Goku Black PUR is the first Fighter to have a type disadvantage nullification Special Move. This is incredibly useful to get huge amounts of Damage on YEL Fighters and it can even catch some players off-guard and secure a kill.

LL SP Rose Goku Black PUR has added a new Damage modifier to the Bleed status. With his Extreme Bleed, he can effectively chip away at an opponent’s health overtime which can prove useful in certain situations such as a timeout.

Being able to continuously do fixed Damage against your opponent, even when they are on standby, is very valuable.

Whenever he lands this Extra Arts, he gets a Special Move Arts which is an insane combination. However, his Extra Arts is a long animation and as such, will leave you vulnerable if you do happen to miss it.

It goes without saying that, LL SP Rose Goku Black PUR received the wrong color. Every team that he’s apart of has a better PUR Fighter than Rose and as such he’s a second option on those teams which reduces his value drastically.

It would have been much better if he was of RED typing.

LL SP Rose Goku Black PUR’s disruption is sort-of useless. Reducing enemy ki by 10 on entry is not effective at all and -10 to enemy Arts cost for 3 timer counts after combo has ended is essentially useless in battle as 3 timer counts is too short of a duration.

As mentioned in the weaknesses of this Fighter, he’s not the main PUR Fighter, especially on a wouldn’t recommend using this Fighter on the God-Ki especially since LL SP UI Goku PUR is head and shoulders above Rose on the team.

Once again, LL SP Rose Goku Black PUR is considered a second option on the Future Team. SP SSB Vegeta PUR’s support and overall value to the team are too much for Rose to compete with. Similar to the Powerful Opponent team, Future’s best team is filled with blast-centric Fighters such as SP Goku Black GRN, Z7 SP SSJ2 Trunks BLU, and SP Perfect Form Cell RED. However, you can find some success with a strike-centric Future team with SP Vegito BLU, SP Trunks: Mai(Assist) for support, etc but it’s much weaker than the blast-centric Future team.

A HP Equipment is a must-have on every Fighter.

This scythe will carve a reminder into your mortal flesh!

The Equipment that was added alongside LF Rosé happens to be one of the best, providing a very large Base Strike Buff, similar to This is the Kaioken, as well as providing extra Special Move and Ultimate Damage. In an LBR setting, it is possible to make an argument to use 2 HP Equipment in order to maximise Rosé's survivability to keep applying his Extreme Bleeds, dealing an even larger portion of Damage over time.

A Pure Strike Equipment is a must-have for a Strike Based Fighter.

SP SSR Goku Black PUR is considered 3 stars for the Tier List. At 6 stars, he has a little bit more of an argument for Tier 1, but likely would remain Tier 2. We prefer SP SSB Vegeta PUR on the core, but Rose is recommended over him at a similar star level or if the Player has not acquired Vegeta.

Many were expecting this unit to be Red so he could at least slot onto the God Ki Team, and while Purple was likely the next best choice, he still can’t really cut it on the core of any Team.

SP UI Goku PUR is superior on the God Ki core, which Rose does not even buff. SP SSGSS Vegeta PUR synergizes much better with Future due to the heavy Blast-centric focus they have, as well as the fact that Future is slow without Vegeta. SP DKP (Aged) PUR is just a flat out superior unit and Power Opponent’s Blast variation is superior to the Strike variation.

Tell me how to actually play PVP. Please
For almost three years of playing this game, never in my life have I played a PVP mode…
Trunks Zenkai Banner
Hello! I want to know when is the most likely chance for Blue SS2 Trunks Zenkai Banner…
Hyperdimensional Co-Op (Frieza: Full Power - Extreme)
Well, looks like we got another extreme battle with the evil emperor himself. This…
Help building a teem
Hi I’m new to the forum, and kinda new to the game, I need help building a team and…
Why the Rising rush is a broken mechanic
More of me wanting to vent somewhere, but also discussing about the Rising Rush in…
Read More