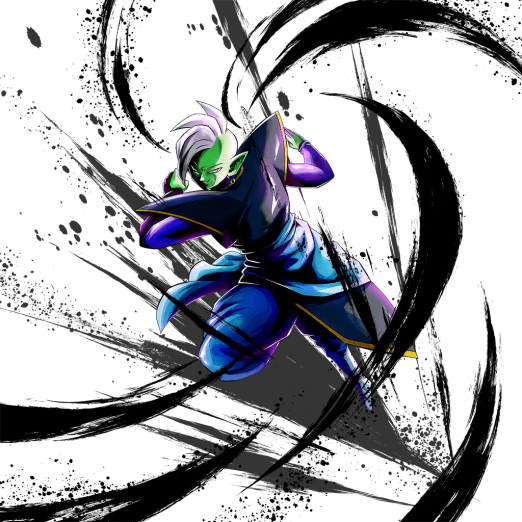 SP Zamasu RED wasn't too hyped upon release, but that quickly changed and he became an absolute must-have in Future and Regeneration Teams due to his near inability to die.

It's hard to convey with words how hard SP Zamasu RED was to kill. His "Immortal Body" Ability provided him with an abundance of survivability--including being able to Restore his Health by 20% when it reaches 0 the first time.

Despite being a brick wall Defensively, he still has nice Damage Buffs in his toolkit allowing him to be serviceable on the Offensive side of things.

While he was a revolutionary Fighter on release, he's been subject to power creep and many Fighters that either directly counter Regeneration or can nullify his Endurance, making him less effective and sometimes borderline dangerous to bring along.

Understandably similar to the toolkit of SP Goku Black YEL, SP Zamasu RED is especially harsh against Saiyans and Hybrid Saiyans with 30% more Damage inflicted against them.

This allows him to pack a surprising punch against two of the more popular Tags in the game, which will no doubt remain relevant for quite some time.

It’s still going to be pretty hard to kill this Fighter due to his high Defensive stats and Healing Abilities.

His Main Ability Team Heals for 25% and removes all Debuffs and abnormal conditions—this is especially overwhelming to play against when his usual Teams also have other Fighters capable of Team Healing, making him that much harder to take down.

But it’s his Immortal Body Unique Ability that truly makes him a nuisance. He Restores 10% Health after every Enemy Combo, reduces Combo Damage received by 40% when cover-switching, and jumps back to 20% Health the first time it drops to zero.

SP Zamasu RED's stats alone do enough to cover a Team's Defense, but all of his recommended Equips give him an additional Boost to Strike and Blast Defense on top of it all.

SP Zamasu RED has a lot of Damage Boosters, but his base Attack stats aren’t very high. Most of those Buffs aren’t picky between Strike or Blast Attack, but his Extra Move inflicts a +10% Slice Damage received Debuff—which in this Fighter’s case only increases the Damage of his Special Move and Strike Attacks.

While his "Utopia's Beginning" Ability allows him to do well against certain Tags, he will almost certainly struggle on Offense against any other Tag.

SP SSJ Goten PUR, SP Angry Goku BLU, SP Super Vegito PUR, and SP SSB Vegeta PUR are all relatively newer Fighters that can tear through SP Zamasu RED. They are very popular in the Meta and all four have one thing in common: they nullify SP Zamasu RED’s Ability to restore his Health after he’s killed.

This coupled with power creep has seen SP Zamasu RED have quite a fall from grace. Although he’s still a relatively serviceable Fighter, he must be sheltered quite often.

He, SP Mai GRN, and SP Perfect Cell YEL were an excellent Team in their primes, but are no longer as dominant. That being said, SP Gohan GRN and SP Goku Black PUR have given this Tag a bit of an uptick in usage.

While this Tag wasn’t doing too bad before, the releases of SP Lord Slug BLU and especially SP Perfect Cell YEL caused the Tag to - much like SP Zamasu RED - revive. Regeneration has always been a nuisance durability wise, but now has the Damage to go along with it.

The addition of SP UGA Super Buu GRN has also been a big help.

SP Zamasu RED is a Defense Fighter with an obnoxious amount of Healing, so anything that can Boost Health and Defenses is excellent.

The 15% Boost to both Defenses makes this the best choice here. SP Zamasu RED also does a respectable amount of Damage due to his Unique Ability, so the 20% Strike Attack is a very welcome addition.

As if SP Zamasu RED wasn’t enough of a nuisance to kill, he got another excellent addition to his Equip arsenal with “Master Korin”. It’s more or less the same as “You stay here!”, except the Blast Defense can get up to a whopping 20%.

Awakened Master Korin is an option if he’s used in a God Ki Team.

SP Zamasu RED was a revolutionary Fighter on release, as he was incredibly hard to take out and could dish out some punishment himself as well.

Unfortunately, or fortunately depending on who's asked, he’s simply too old to compete anymore. He's not durable due to power creep, and his Damage was always a tad bit inconsistent.