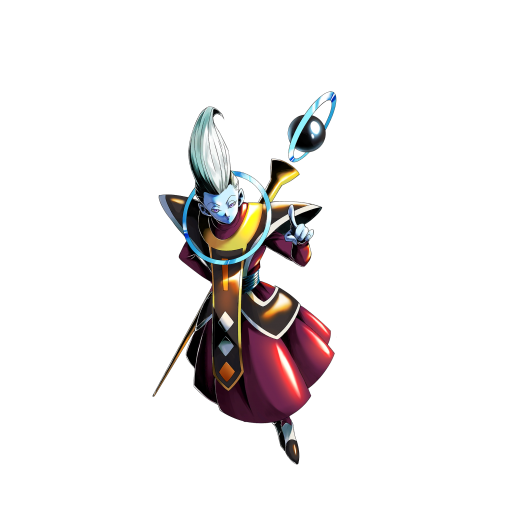 Beerus' personal attendant arrives and true to form helps Beerus variants thrive. That being said, EX Whis RED doesn’t need a Beerus variant to be the star of the show. He provides exceptional Synergy with other God Ki Fighters.

EX Whis RED is essentially a SP Fighter with an EX Rarity. When paired with other God Ki Fighters, he can deal an absurd amount of Damage all by himself. He also helps them out in return by increasing their Damage inflicted and Ki Recovery Speed when switched to standby.

While Whis' spot has been supplanted by SP Super Saiyan Rose Goku Black RED, he is still one of the most impactful and influential Support Fighters in the game. That being said, place on God Ki is cemented for players who possess the Zenkai Awakened SP Beerus GRN, who Whis turns into a true monster.

EX Whis RED holds an Extra Arts Card, an incredibly sought after quirk that proves to be deadly in combat. His Extra Move - Mysterious Staff - destroys all of his own cards as well as the Enemy Fighter’s Cards, and draws 4 new ones.

This might seem like a neutral situation, but it’s actually quite advantageous for EX Whis RED. He can rid the Enemy Fighter of their Ultimate Move, refill his hand to collect Dragon Balls, or use it as a way to continue a Combo if he’s exhausted all of his Cards.

Normally, Support Fighters enable only their Teammates to do Damage, but EX Whis RED has some Offensive utility as well. His Blast Attack is high enough to tear through Fighters all on his own.

These stats are amplified tremendously by his Unique Ability “Attendant of the Gods,” which gives him 40% Damage inflicted when he enters the battlefield simply for being paired with a God Ki Fighter.

If that God Ki Fighter is Beerus, his Damage output transcends what is typical of Support Fighters, with a Card Draw Speed and Arts Discount Buff.

Here for a Good Time, not a Long Time

While his stats overall are still great for an Extreme Fighter, he suffers from low Defenses.

This is unfortunate, considering how valuable his Support Abilities are, and also because his Main Ability Restores Team Health by 25%. If Whis survives a Combo or two, his Main Ability can bring him back to a relatively safe Health total, but often he lacks the bulk to survive that.

Despite all that, if Whis' Team is built right, simply the additional Extra Arts Card he brings to the table is enough to justify his place on the core. Because that Card stays in the deck even after he falls in battle, Whis' impact on his Team never truly goes away.

Blast Defense isn’t the worst thing in the world, but a double Z-Ability for the Tag would’ve made him much more enticing. Now that there are more powerful Red options for God Ki, his usage on the Tag is difficult to justify

The strongest synergy Whis has access to is arguably with SP Super Saiyan God Goku PUR, whose devastating Extra Arts Card, God Bind, is so broken that Whis begs to be deployed alongside him.

Whis unlocks his true power when he is deployed alongside Beerus Fighters, but this is not especially relevant unless a Zenkai Awakened SP Beerus GRN is available. In which case, Whis and Beerus form a truly Godly core that can go toe to toe with any of the Meta's Top Teams.

This Equip is imperative for any Red EX Rarity Fighter due to the large stats Boosts all across the board.

EX Whis RED’s base Blast Attack stat is higher than his Strike Attack, so ideally he should be optimized with that in mind. The additional Defense is appreciated as well. The Added Critical is especially relevant when Whis is deployed alongside the God of Destruction.

However, he doesn’t have anything viable left to help his Blast Attack stat. In the meantime, this is exceptional as it provides an already Defensively formidable Fighter with more Defenses.

EX Whis RED actually had one of the longest runs in Z-Tier for any Fighter, it was just on the EX Tier List. Now that it's been disbanded, he's found his way onto the general tier list.

Despite his age, he has a lot of appeal right now alongside SP Goku Black GRN. Goku Black very much appreciates the extra Ki Recovery as well as Extra Move Whis brings along.