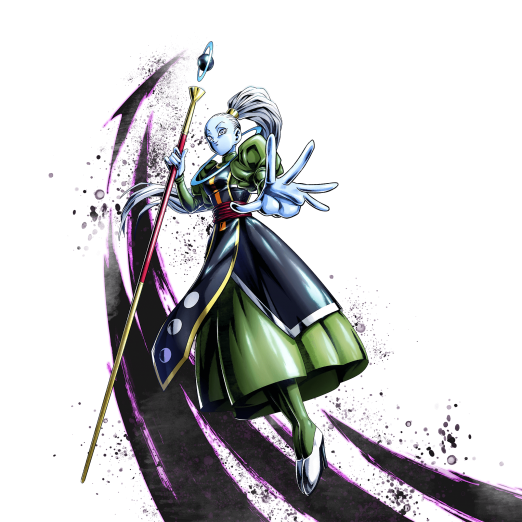 Vados makes her first appearance in Dragonball Legends as a Fighter of SPARKING Rarity unlike her twin brother EX Whis RED. She is considered to be one of the best support Fighters ever released in Dragon Ball Legends, reminiscent of SP Mai GRN when she first got released.

Defensively, she is lacking due to having no form of Damage reduction and her defense stats are very low. However, she does have the ability to disrupt combos on swap in which makes her a bit more versatile on defense.

It goes without saying that SP Vados GRN was made to be a support Fighter. On swap out, she gives allies 35% Damage Inflicted as a base but also gives them 5% Damage Inflicted(Up to 50%). This is one of the best Damage supports in the entire game. She also gives your allies 25 Ki which is good for prolonging a combo and she heals God Ki or Rival Universe Fighters by 10% for each swap out. There’s still more to come for her support capabilities.

With her main ability- “Sardonic Angel” she gives all allies 30% Damage Inflicted and a 15% Team heal.

SP Vados is a Fighter that maximizes your teams' Damage and Survivability with her support.

An Angel Of Destruction

SP Vados GRN is decent offensively which most people don't take notice of. She gets 45% Damage Inflicted upon entry which is respectable and has a card draw speed increase along with -5 to her Strike and Blast Arts which will see her doing fairly long combos.

Vados will also receive the Damage Inflicted from her own support abilities as well. With this, Vados is a Fighter that can support but also dish out decent Damage, so opponents shouldn’t take her lightly.

SP Vados GRN has the ability to stop combos upon cover changing by destroying 2 of your opponent's cards. If timed well, it can easily disrupt a combo and reset the match back to a neutral state. The ability to disrupt combos has been introduced in the game before but Vados’ iteration of it has been one of the best so far.

As stated before, SP Vados GRN is very poor defensively due to her poor defense stats and having no form of Damage reduction. Even so, she does have that combo disruption ability as well as healing abilities to help her out a bit.

SP Vados GRN is the secondary GRN Fighter for the God-Ki Team due to SP Beerus GRN. Both Fighters have support capabilities but  SP Beerus GRN edges out on her when it comes to Offense and Defense. Despite that, she’s not too far off from him due to her support making up for her shortcomings. She makes Fighters such as SP SSB Vegito BLU, HE Shallot LGT, SP SSB Goku BLU, and SP Champa YEL hit insanely hard which makes them utterly oppressive in battle.

On the Rival Universe Team, SP Vados GRN is not in the core due to the release of SP Jiren GRN. Nevertheless, you can use her on the team alongside SP Jiren GRN in a GGY (Green, Green, Yellow) setup with SP Champa YEL.

SP Vados GRN is in the core for the Female Warrior team in a GGY setup alongside SP SSJ2 Kefla GRN and SP Android 18 YEL. Kefla and Android 18 are some of the best offensive Fighters in the game and Vados makes them even better offensively which makes them even scarier to go up against in a battle.

A must-have Equipment for all Female Fighters.

Vados is a Support Fighter reliant on staying alive and buffing her Team through her switch-out Buffs, however, Vados has very low survivability and therefore her Equipment are geared towards making her survive as long as possible through significant increases in her HP.

Similarly as above, this Equipment is geared towards allowing her to survive as long as possible to buff her Team.

SP Vados GRN has a wealth of team choices at her disposal, even giving some slight incentive to Green Color Counter teams due to a lot of units who share these colors having a lot of synergy with her.

Her fragility can be a big problem, as her “Brisk Council” requires her to be switched in and out quite often. One mistake can be the end of her or put her teammates at serious risk. All that being said, she has a plethora of other uniques that more than make up for it. There’s a seemingly never-ending debate between her and Beerus on the God Ki core. It looks like she just took the lead due to how well she works with SP SSG Vegeta YEL