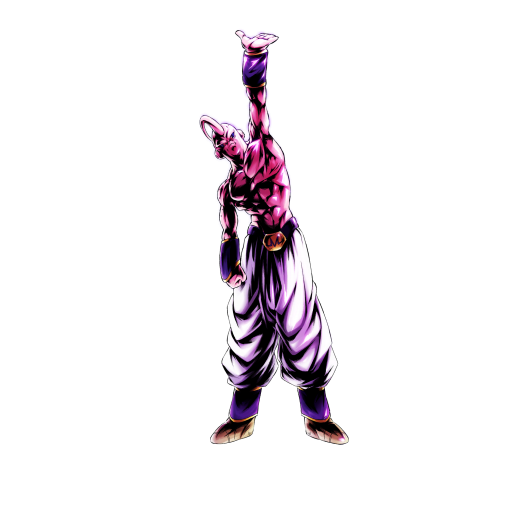 This Fighter has been a long time coming and brings along some hilarious and iconic animations, but a very fitting diabolical toolkit too.

Stats wise, SP Super Buu PUR is exceptional in both Offensive categories, but really makes his presence felt through various Debuffs, whether they come from his Unique Ability or Extra Move. He also has access to an Ultimate Move, which remains one of the most powerful tempo-plays in the entire game.

Switching out against this Fighter is a death sentence, as he receives a wide array of Buffs. Even more devastating is his "I Can't Let a Power Greater than Mine Exist" Unique Ability, which inflicts even more Debuffs on the Enemy Team for a whopping 45 timer counts.

While a bit situational, he's downright oppressive if things fall into place.

His "I Can't Let A Power Greater than Mine Exist" Unique Ability requires 25 timer counts to elapse. He then inflicts all Enemies with various Attribute Downgrades, such as 30% Damage received, +5 to Strike and Blast Arts cost, and -50% to Health Restoration.

It's almost imperative to bring along a Fighter that can clear Attribute Downgrades, as going up against this for the 45 timer counts it lasts can be quite overwhelming.

While SP Super Buu PUR's Ultimate Move only does major Damage as opposed to massive Damage, it does come with various Debuffs for the Enemy, this time targeting their Ki total as well as Ki Recovery Speed. On top of the fact that it works well with his Offensive toolkit, it does a great job keeping the Enemy down by crippling their ability to counter-attack.

While his Unique Abilities are both very powerful, there is a bit of a situational element attached to them. One Unique Ability requires an Enemy to switch out of the battlefield, while the other requires a certain amount of timer counts to elapse.

What makes it worse for SP Super Buu PUR is the fact that his Debuffs can be removed, and there are many popular Fighters currently in the Meta that can not only do this but provide an excellent deterrent to most of his Attacks, such as SP Zamasu RED.

His Defense stats are all below average, especially his Health. As a result, he dies quickly if caught.

The optimal choice for him would be a Regeneration Team, as he essentially replaced SP Super Janemba PUR. Regeneration has historically been more geared towards Offense, but due to recent additions, SP Super Buu PUR now helps them pack a punch to add their insane durability.

This is a no-brainer here, SP Super Buu PUR is great in both Offensive categories and should be utilized to Buff them both.

A great choice if he's being used in Regeneration, due to the potential 21% Boost to Blast Attack.

This makes his Ultimate Move hit that much harder and gives him some nice Ki Restore Speed, which does work well with some aspects of his kit.

However, since this only helps Special and Ultimate Move Offensively, it can be replaced by something like "I Think We Can Do It!" for more consistent Offense. Alternatively, "There's no need for that." gives him Blast Attack but then focuses on Defenses, which isn’t bad on a reasonably durable Fighter like him.

For such an iconic character, SP Super Buu PUR never lived up to the hype at all. His inconsistent Damage and fragility has made him hard to justify in a Match. He's only good for his Z-Ability now.