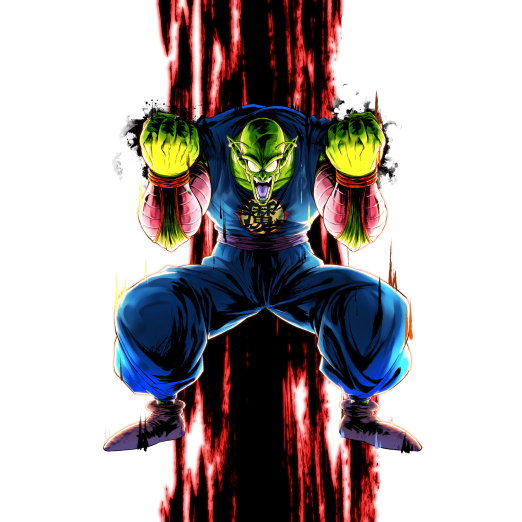 The King rises again! After his incredible Zenkai Awakening, SP Demon King Piccolo YEL has become one of the most powerful Offensive brawlers in the game, with the potential to become a Meta mainstay when Supported by his ruthless cohorts in the Regeneration Tag.

The Demon King is a simple-to-play unit whose only focus is overwhelming his foes with combos that tear through enemy teams so fast that after one or two, the game is all but decided.

What create his capacity for carnage are his Unique Abilities, which provide him with everything he needs to sustain his conquest: High Inflicted Damage Totals, Card Draw Speed, insane Ki Recovery - all for negligible investment.

The evil Namekian can even influence enemy switch timers and augment his Damage further with Debuffs, and his Main Ability's devastating Dragon Ball steal can end games instantly if it's used efficiently.

This menace of a Fighter isn't even weak Defensively thanks to his Zenkai Ability-backed stats, sporting over 150k in both Defenses at the bare minimum Zenkai Limit Break level. With or without Support, Zenkai 7 SP Demon King Piccolo YEL establishes himself as THE premier Yellow Fighter on the Regeneration Tag.

The absurd Offensive Buff totals that the Demon King can reach are what make him such a force to face. Without even factoring in Team Support, Piccolo is guaranteed to have at least 70% Damage Inflicted, +1 Card Draw Speed, +50% Ki Recovery, and at least 40 Ki, because he recovers that much when he enters the field.

With his Zenkai Stats, the potential return of his 20% Damage Inflicted Debuff, and his scaling Damage Buffs that activate if he strikes a poisoned foe taken all together, It's impossible to call Piccolo anything other than a perfect Offensive Fighter.

To ensure maximum fairness, the former comes packaged with his Dragon Ball Steal and the latter draws him a whole new hand of 4 Cards. Demon King Piccolo's Damage is simply on another level.

SP DK Piccolo YEL has two very powerful abilities that are all about swinging the momentum of the match in his favor.

Anytime he enters the field, the entire enemy team is subject to 2 extra Substitution Counts when they exit the field, which might not seem like much, but over the course of the match this can cripple enemy momentum, especially if they have no way of addressing it.

The Dragon Ball Steal is truly the most unique and potentially dangerous abilities the king possesses. If used strategically, this ace in the hole can accelerate his Team's first Rising Rush to create an ocean of advantage between his Team and the Foe, or after a Rush this Ability can ensure that the enemy cannot use their Rush immediately in retaliation.

For a Fighter this Offensively potent, these extra bits of utility only serve to further his lead over the rest of Regeneration's units. Demon King Piccolo is simply a cut above the rest.

Though the Demon King doesn't particularly care about needing to use Blast Arts in combos, because most of his Damage Buffs are generic, he definitely prefers a Strike-based set-up. The base Ki Cost of Blast Arts matters a lot to a unit like Piccolo, who wants to string together touch-of-death combos constantly.

This is hardly a significant knock against the Fighter himself, it's just important to recognize his preference when Team-building.

This Tag is loaded with viable Fighters and powerful Z-Abilities, and Zenkai 7 SP DK Piccolo YEL fits right in as its new king. Piccolo plays staggeringly well with other Strike-oriented Fighters, as well as Blue Fighters who can answer enemy Reds while adding something to the Team.

Green Fighters like Zenkai 1 SP Majin Buu: Good GRN adore having Piccolo around to answer Purples, and Buu's Healing can cement the Team's lead even further after Piccolo craters the enemy line-up.

The obvious choice to run alongside Piccolo is SP Super Baby 2 BLU, who is still the Regeneration Tag's top Supporter. Baby increases the efficacy of the Demon King's own healing. He can Buff him to new terrifying heights of Damage with his Main Ability.

A Pure Strike Equipment is necessary for a heavy Melee based Fighter.