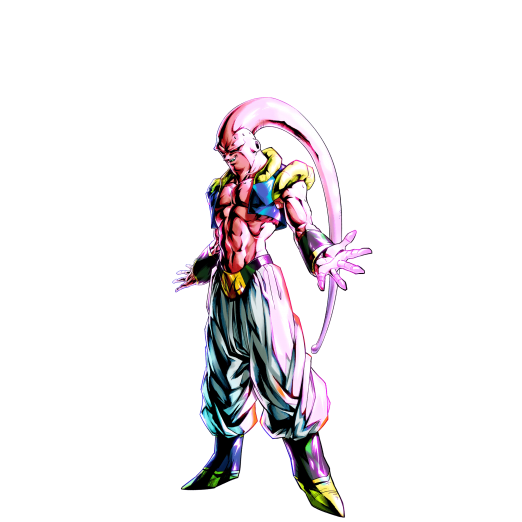 SP Gotenks Absorbed Buu: Super (Blue), colloquially named "Buutenks" for the sake of brevity, is not a commonly represented character in Dragon Ball-related media, so seeing him given the Sparking treatment in Dragon Ball Legends was a welcome change of pace. Like his canonical appearance, Buutenks is all about violence, sporting a toolkit that seeks to maximize his Damage while incorporating design aspects of Gotenks Fighters.

Buutenks' game-plan is simple, perhaps too simple - unload tons of Blast Arts Cards and deal staggering amounts of damage, which is easy thanks to his time-sensitive Damage Buffs. It's not as though Buutenks' kit is completely devoid of utility, as his Special Move arts card can cancel attribute upgrades and he brings some interesting Blast Arts to the party, but that really is the extent of what he brings to his Team beyond violence.

As far as his Teams are concerned, he faces stiff competition on his main one, Regeneration, and the Powerful Opponent Tag that his split Z-Ability supports isn't quite built out enough to function as a well-rounded composition, though it can function fairly well as-is.

Buutenks is undoubtedly powerful, but he's also a perfect example of why Damage isn't all that matters in Dragon Ball Legends. Many Fighters can use a team's Blue Fighter slot more efficiently than he can, even if they don't hit as hard as him.

He Does A Lot of Damage

With or without proper Support, Buutenks is capable of some real carnage. For 75 Timer Counts he has access to an unconditional +50% Damage Inflicted, as well as cost reduction for his Strike and Blast Arts. He also gets a free 40% Damage Inflicted Buff when he enters combat, which dissipates when he takes a hit, mirroring some Gotenks variants.

This combination of effects makes his role on the team clear; he enters the field when a teammate provides an opening and blasts the foe full of holes. Buutenks' Extra Arts card reinforces this identity, with a dwindling set of Buffs that are at their most powerful when the fight begins.

Buutenks can significantly ramp up his damage output with his Main Ability, which adds another 50% Inflicted Damage Buff to his pile of facsimile buffs. It also has some decent extra perks, like 20% Damage Reduction and Attribute Downgrade Negation.

What makes this ability so useful is that it's available after just 5 timer counts, ensuring that Buutenks is always ready for that teammate to score that lucky hit that lets him run wild.

Though he has no consistent way to draw it, his Special Arts Card is capable of some serious pain, with its massive damage multiplier and its ability to cancel the attribute upgrades of its target twice on hit.

One of the most interesting things about Buutenks is the Cards he comes with, both Blast, with one Buffing Blast Damage by 20% on use for 2 Counts, and the other Buffing the Inflicted Damage of its user by 10% for 10 Counts. This isn't worthless; many of his teammates really appreciate the extra kick to their Damage.

...and Not Much Else

Fighters have succeeded in Dragon Ball Legends without intricate, multilateral toolkits before, of course, but most of the game's strongest attackers offered something beyond dishing out big numbers. Buutenks has meager Damage Reduction and the ability to prevent being Statuses and Debuffs, which is fine, it's just average at this point.

Another unfortunate aspect of this card is that he's detrimentally faithful to the abilities of the fusion he absorbed. After 75 Counts, which, granted, is a very long time, Buutenks loses his primary source of Damage and his Extra Arts effect becomes Hero-worthy. For a Fighter that does so little already, having an obvious issue with long matches seems unnecessarily restrictive, even if it is flavorful.

The Regeneration Team with Buutenks leading the charge takes on a slightly different playstyle; a real Blast Attack assault. With Fighters like SP Fusion Zamasu PUR and SP Piccolo YEL working alongside Buutenks, its very possible for the Team to simply overwhelm its enemies before the 50 Timer Count mark. These two are noteworthy because of their Ranged Playstyle, but other Regeneration Fighters work as well.

SP Omega Shenron RED is a brave choice in this meta, but he thrives alongside Buutenks. The same could be said of Zenkai 1 SP Majin Buu GRN and SP Evil Android #21 PUR, who both should see usage anyway as Bench Fighters.

The Regeneration Team is large enough to Support a number of playstyles, but Buutenks will always function the best alongside other Ranged Fighters.

SP Gotenks Absorbed Buu BLU can certainly pack a significant punch at the very beginning of the match, but fizzles out quickly. He can’t take a hit reliably, and his team really didn’t need what he brings to the table at all. He does provide interesting additional Z-Ability support to Powerful Opponent, but that team is still materializing.