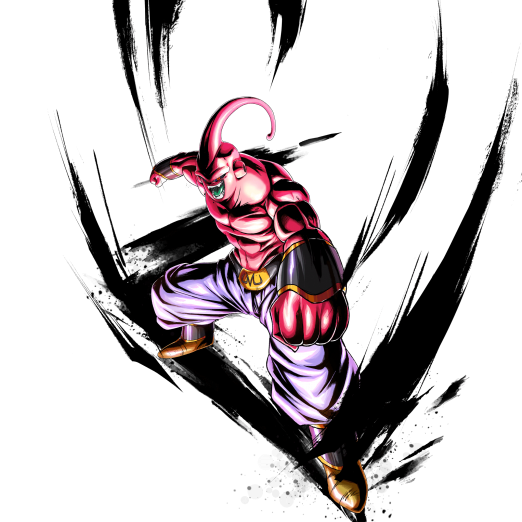 Continuing the trend of absurdly powerful new Extreme Fighters, EX Super Buu RED arrives and sets a new Offensive standard for the Regeneration Tag. The genocidal Majin is a simply designed Fighter focused on closing gaps between him and his Opponents and brutally capitalizing on openings to land fatal combos.

While the overwhelming majority of his toolkit is centered around Offense, his Special Arts Card lets him function intermittently as a Support Fighter, as it grants a sizeable Damage Buff to all Allies and lowers his own Strike Arts Cost for a meaningful amount of time.

EX Super Buu RED is not without glaring flaws, however. He is Defensively bankrupt and his immense Damage output is just as fragile - he’ll lose his main Damage Buff if he takes even a single hit. Taking everything into account, EX Super Buu RED is a surprisingly strong bruiser who requires assistance from his comrades to reach his full potential.

EX Super Buu RED functions best as a wall-breaker, swapping in during an Ally’s combo to press the advantage. The combination of Damage Buffs and Inflicted Damage Debuffs he packs lets him melt enemy Health with little effort.

The reason to run EX Super Buu RED lies solely in his Main Ability, which, fittingly, lets him completely reverse disadvantageous situations with smart application. It restores Ki by a staggering 70 and provides him with a fantastic Strike Damage Buff for 30 Timer Counts.

Its power exponentially increases when EX Super Buu RED has a lower Health percentage than his Opponent, giving him an additional, permanent Inflicted Damage Buff and restoring his Health by an absurd 50%. The fact that specific circumstances are necessary to get the most out of this Ability is a downside, but its additional utility can be game-deciding in a pinch.

Even though EX Super Buu RED can Heal with his Main Ability, his Defenses are very exploitable by top Meta threats. Against many of the most powerful and ubiquitous Teams, Buu will need teammates able to halt enemy momentum, because if they get a combo going against him, they will most likely be able to shred his Health.

EX Super Buu RED fits into Regeneration as a solid Red option, though his bulk necessitates Defensive Teammates to accommodate him well. An excellent partner for EX Super Buu RED is SP UGA Buu GRN, who can provide him with many Special Arts Cards to significantly increase the Team’s overall Damage. To complete the Color Wheel, SP Perfect Cell YEL or EX Nail PUR can be used. Cell especially is an interesting choice, as his Cover: Rescue can bail EX Super Buu RED out of trouble once his Health total is low enough to guarantee the secondary effects of his Main Ability.

The newly released SP Super Baby 2 BLU greatly enhances Buu's Bulk and Damage over time with his Support Abilities. Baby can even supplement Buu's poor Defenses and act as an off-tank for his Team.

While EX Super Buu RED is outclassed by both SP Kid Buu RED and SP Super Janemba RED on this Team, he is still an interesting option that is worth considering, especially for players who lack both Kid Buu and Janemba.

He's good in both forms of Attack, but he and his Regeneration Teammates tend to prefer Strike, so this should be used primarily.

There's simply much better core options, and his Z-Ability doesn't justify a bench spot either. He's OK in the core ONLY IF the Player is missing the aforementioned Red Regeneration Fighters.