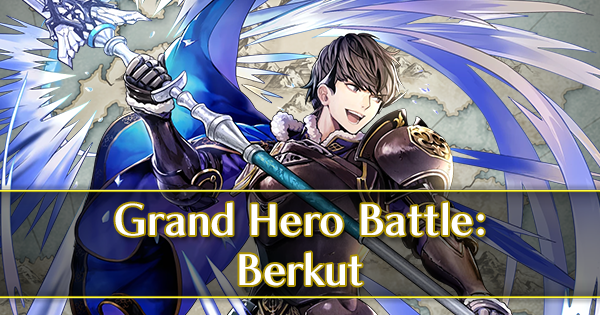 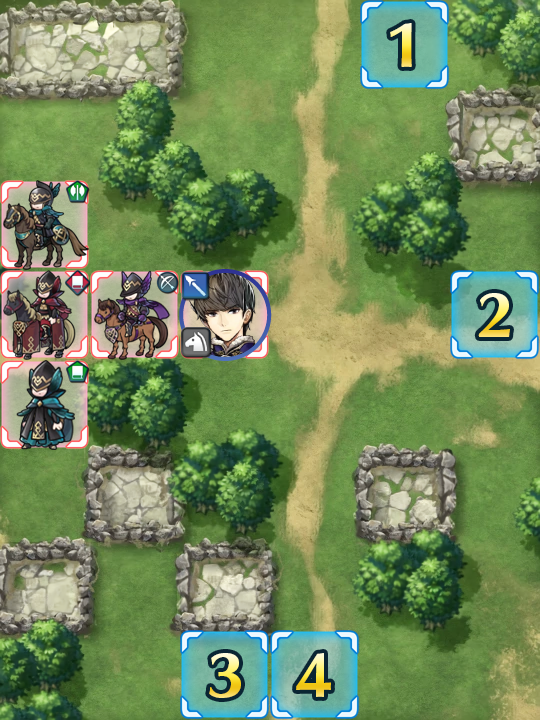 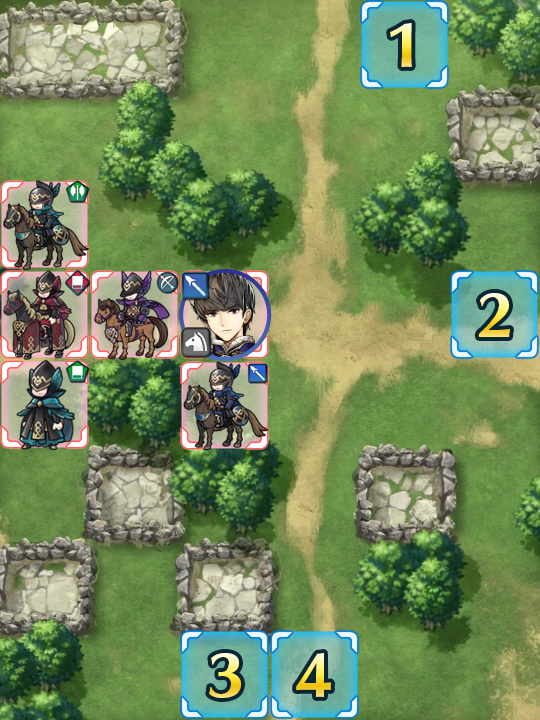 Say Uncle! Returning from the depths of Grand Hero Battle purgatory is Berkut, giving you the chance to beat his map if you haven’t completed it already. This is a great opportunity if you’re a newer player or didn’t have the right units to beat Berkut the other times his map has been run. As per usual, you should expect some curveballs, but the lack of reinforcements and easy-to-use defense tiles should make completion of Infernal a bit easier than it normally is. While the strange starting positions may give you some pause, there’s no issue with trying out the map until you figure out where to properly position your units. Trial and error will likely be key here -- and will serve you well if you don’t allow it to try your patience.

Before you begin teambuilding, it’s completely possible you already possess everything you need to beat this map. Created by Gamepress staff member RedFerrari1998, the video guide below uses only F2P units, no Skill Inheritance, and Seals -- see the description for more details. If it doesn’t work for you, though, then read on!

As is generally true of Grand Hero Battles, the individual units used is very important as they will primarily inform a strategy. There are a few routes one can take depending on what units are personally available, and, of course, adjustment based on the units one possesses is always a possibility.

Although the enemies on this map will start moving regardless of whether you bait, damage, or KO them, it’s advisable to use a baiter so that your other units won’t be overwhelmed by your advancing foes.

Armors such as Hector, Valentine Hector, Fallen Hardin, Black Knight, Zelgius, and Winter Tharja are able to hit hard very upon counterattacking, especially if they’re making use of Quick Riposte or Vengeful Fighter, and can make use of Armored Boots to extend their range as well as class-specific buffs. Cavalry tanks like Sigurd, Xander, and Camus perform particularly well with class-specific buffs, but may struggle to maneuver due to trees.

Nowi, Young Tiki, Adult Tiki, Fae, Myrrh, and Fallen Robin all boast decent mixed defenses and also have access to class-specific buffs. Legendary Robin is also a potential choice, but may struggle due to her lack of color advantage, and, like Myrrh, must be wary of archers if she does not run Dragonskin or Iote’s Shield.

Great F2P options include Legendary Ike, who natively sports Warding Breath which boosts his Resistance and grants him cooldown reduction, and Fjorm, who is able to tank the red mage with her high Resistance and battle ranged foes with her exclusive Special, Ice Mirror. Brave Ike is another potentially F2P option (depending on if he was chosen as one’s free hero or not) who also offers cooldown reduction.

As per usual, strikers are a potent force who can usually take out most foes without breaking a sweat. Though they can get easily cornered on this map, skills like Escape Route and Wings Of Mercy can grant them even greater mobility than they already possess.

Archers are powerful strikers that can either finish off foes on their own or provide an assist. In particular, however, Brave Bow users can be incredibly potent on this map due to their ability to overpower and finish off any foes your tanks may otherwise struggle with. New Year Corrin, Brave Lyn, WF Hinoka, Bridal Cordelia, Klein, and Setsuna are potential strikers you may want to use, with a special mention going to New Year Corrin and Brave Lyn given their F2P status.

Alternatively, melee Brave users are able to hit foes twice without retaliation, and may even quad hit if they outspeed an enemy. Cherche, Cordelia, Hinoka, Elincia, and WT Reinhardt are all great Brave users who can make excellent use of class-specific buffs. Finn is a great F2P option who would work particularly well in a cavalry team.

Brave and Blade tome wielders can also serve to be useful if your team composition provides them with the appropriate buffs, though speedy mages can also be effective strikers. Tharja, Reinhardt, Tailtiu, Linde, Nino, and WT Olwen are potential options here, especially if they are equipped with a Breaker skill to add to their coverage and are provided with class-specific buffs or a buffbot like Eirika or Ephraim.

A striker, however, doesn’t always require heavy investment. Although Alfonse isn’t speedy and doesn’t possess a native Brave sword, Death Blow (which he naturally learns) ensures that he can heavily damage if not outright KO most green enemies. Additionally, his good physical bulk ensures he can survive a foe’s attack if he must.

Dancers help provide support, may even have a decent offensive presence themselves, and can usually tank a hit or two, if need be. Olivia, Performing Olivia, Performing Inigo, Performing Shigure, Performing Azura, Azura, New Year Azura, and Ninian all give the refreshment that high-firepower units need while also possessing the ability to provide an assist to KO an enemy.

While not generally a great choice over units who can deal heavy damage or dancers, Healers can be incredibly useful in this Grand Hero Battle due to their ability to provide valuable healing to your tanks. Genny, Priscilla, Elise, Nanna, Wrys, and Lissa are potential additions to a team that may serve you well on this map.

Strategizing for this Grand Hero Battle shouldn’t be too challenging due to the absence of reinforcements. While it can be difficult to exactly predict what will happen due to IV / Merge variance, here’s some general tips to get you started.

Stuck In The Middle With You

Berkut’s map certainly has unique starting positions, and that’s to put it lightly. Since it essentially forces you to split your forces, your first priority likely should be to either fortify your position or re-unite your team.

Ideally, you’ll want to influence the AI by at least having one baiter here, though if you can reach one of the defense tiles with a unit who can counterattack regardless of range, that may work as well. Otherwise, simply aim for KOing or heavily damaging one of the foes that charge forward. Do note that the archer carries a Firesweep bow and therefore can’t be KO’d on Enemy Phase.

Two For The Price Of One

Unless your tank is desperately low on health, it’s almost always a good idea to bait more than one foe at once. Because almost every foe on this map is slow as molasses and they do not carry brave weapons, you don’t have to worry about being doubled -- meaning that even a disadvantageous matchup that pits the weapons triangle against you shouldn’t prove devastating. There’s no need to be overly cautious, especially one your team is reunited and you have numbers on your side.

As with every map, it’s possible that the AI will act in unpredictable ways like how the lance cavalier attacked Brave Ike first in the screenshot below, causing the axe cavalier to advance. If this happens, don’t panic! Slow down and see if there’s an immediate solution to your issue -- it’s possible that you will be in an even better position than you were in before. If you’re well and truly stuck, you may want to try the map again while adjusting your positioning. Moving a unit one space up, down, right, or left can sometimes make all the difference.

The Key Of Caution

Nothing is worse than losing at the very last moment, so once you’re down to only one foe in the enemy’s forces, it’s always a good idea to take your time. They may have a special charged, or they could have a Defiant or Brazen skill active that you’re not expecting -- which, if it catches you off-guard, will cause you to curse your quick fingers. In general, being methodical with your moves and paying close attention to the battle forecast is a good habit to have, since it will grant you the ability to see if you need the help of Seals or skills to help you KO or survive a foe. Since there’s no benefit to performing your turns quickly, you can stare for as long as you want… and maybe the solution will come to you when you least expect it.

Don’t be fooled by video walkthroughs of any Grand Hero Battle that you watch -- it’s very rare for anyone to beat high-difficulty content (or record a video of themselves doing so!) on their first try.  Additionally, the potential variance in unit builds that Skill Inheritance brought along with the random nature of summoning has resulted in pretty much every single summoner having different “building blocks” to work with. This, when combined with the high difficulty level of Infernal, may prove frustrating while someone is trying to find the right combination of units and moves. The key thing to keep in mind is that it may take some light Skill Inheritance and Seal shuffling and multiple tries of the map to find a strategy that works for you. Every single turn you complete gets you one step closer to completing the puzzle. Finally, reading about or watching videos of successful strategies may also help you break through a particularly difficult turn that you can’t complete, or may give you ideas of a new unit to use.

Clarine's (Elise, Priscilla, Nanna, or Maribelle are good here too) Gravity+ will slow down all of the Cavalry units, making it easier to get rid of particular units one by one while avoiding units such as the Firesweep Bow Cavalier and Berkut until the last minute.

Brave Ike QR Seal in spot 3
Azure in Spot 4
Brave Lyn 2
Elise 1
Unlike the video simply push ike up one spot and azure behind him.
Lyn to bottom right corner; Clarise out of trouble up top (She doesn't do anything; being cavalry she lures Berkut at end but stays out of range).
Save Berkut for last, requires lyn attacking twice with the dancer refresh