Tempest Trials Mini - To Die on the Battlefield 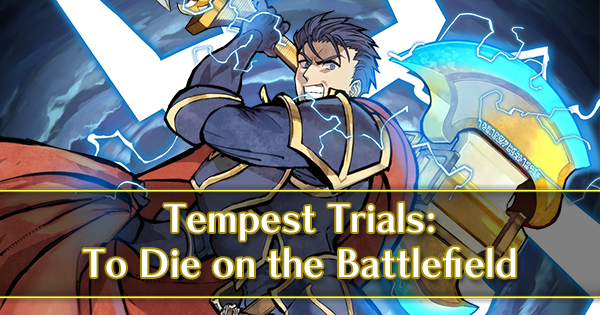 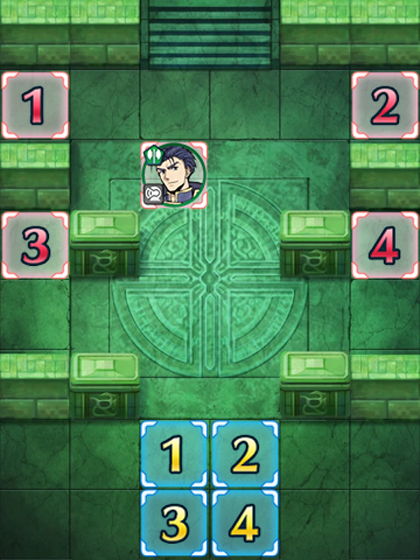 If you include a bonus ally on your team, you can increase your score. If you add multiple bonus allies, only the highest bonus will apply. Bonuses do not stack. Bonus Allies gain stat boosts equal to +10 HP, and +4 to all other stats.

This special event contains a series of maps you must fight your way through from beginning to end. Losing does not mean game over, as you can retry with a second team. Therefore, teams should try and prioritise for speed as well as survivability. This event is a Tempest Trials Mini, and has a few differences.

The first units you’ll want to think about using are of course, the bonus units. With their huge stat bonuses (+10 HP, +4 to all other stats) They will punch far above their normal weight. Ninian is the premiere choice, with her standard Triangle Adept build working wonders against the many red units that appear during the trials. As a dancer, she provides nearly unrivalled utility. Hector is even more amazing this time, being a bonus unit. With a mild source of healing, he can duel the final boss and many other units. Lyn dosen't provide as much utility as other red units, but can sweep through many enemies at low HP thanks to her Brash Assault build. Eliwood can be used as apart of a cavalry team with Ursula, but is poor at dueling many fast red units. Ursula herself is a strong option and can sweep maps with some support. Lloyd is a decent option, but is largely inferior to Masked Marth and Lyn. Masked Marth provides healing with a medic build and can sustain a team nearly entirely by herself, with the appropriate skills. Anna is a poor choice of unit, with red units being extremely common this time around.

Healers are fantastic in the Tempest Trials, and can single-handedly sustain your team throughout the duration of the run. However, running a healer can compromise your team (unless you can get Wrathful Staff). It’s highly recommended to take a healer for safe runs, but keep in mind that they will slow your runs down compared to more offensive teams. There are no healers featured as a bonus unit, so teams may prefer to take Masked Marth instead.

There are a few types of builds which can be used to heal teams without using a valuable team slot on a dedicated healer. The first of these is the “Falchion Medic”, a build type which requires a user of the legendary Falchion. With Renewal in B slot and Reciprocal Aid as a support skill, this build can provide healing to allies without sacrificing offensive power. Notable units who can pull this off include: Alm, Lucina and the bonus unit Masked Marth. This is a great option for those with the units, but expect a lower amount of raw healing. If you have Linde, you can run a Breath of Life build. The effects from Aura (Linde’s unique tome), Breath of Life, and the Breath of Life seal stack to provide a whopping 15 health to all units around her when she attacks. Make sure to take Reciprocal Aid along with this build, to ensure that Linde herself can be sustained. If you don’t have Linde, the build can be applied to any character, but will only heal 10 HP. Remember that a dancer can potentially double this healing output. Lastly, there is the "sustain tank" build recently popularized with the addition of the Steady Breath skill. With a cooldown -1 weapon, Steady Breath, Quick Riposte and Aether, a unit can charge and fire off their special every round of combat, keeping their health topped up over a long time.

These are some of the most potent allies for Tempest Trials, offering both safety and speed to your run. In short, they are great for all the usual reasons, but are affected by their low combat stats, which can hold them back. Due to team limitations, if you choose to field a dancer they must be a respectable combat unit in their own right, with either a full build or something close. Ninian is the premiere choice since she's a bonus unit, and comes with large stat boosts.

One of the easiest ways to clear the Tempest Trials is with a powerful ranged attacker wielding a Brave bow or Blade tome. Combined with a buffer or dancer, they can destroy most units in the trials with ease once they are under the Desperation threshold. Ursula is the best choice for these trials, as she receives significant stat boosts, and can be the target of cavalry class buffs.

In all of the following examples, units can be switched and subbed depending on your personal collection. Only one bonus unit is really required, but more of them tend to be better due to the sizeable stat boosts they receive.

A simple three-unit core that covers all the bases, coming with healing, damage, and a counter to each color. Hector is the anchor for the team, being able to tank nearly everything with the stat bonuses granted by the trials. He has the important job of luring and KO'ing mages for the team. Ninian provides support with Dance and with Triangle Adept can combat the myriad of red units present in this version of the trials. Beware of Falchions: Masked Marth can handle them slightly better. Masked Marth is the team's healer, her optimal build is Falchion + Renewal with either Ardent Sacrifice or Reciprocal Aid to restore the health of her allies. She can even run Breath of Life 3 in slot C plus the seal to give out even more healing. This team's best option for it's fourth slot is a powerful ranged attacker such as Ursula, Bridal Cordelia or Linde. The latter can run a healing build with her Aura tome, making the trials an absolute breeze.

This team can be divided into two halves: the offensive core Ursula and Brave Lyn, and the defensive core of Masked Marth and Hector. Ursula and Brave Lyn combine to form a powerful ranged attacker duo, capable of wrecking nearly everything. Both units should run Hone Cavalry to buff each other into the stratosphere. The recommended build for Ursula is a Blarblade combined with Life and Death and Desperation to avoid pesky counterattacks. Lyn can run any of her flagship builds, even a default one will perform well. Hector and Masked Marth form the backbone of the squad, with Masked Marth providing valuable healing with a Falchion + Renewal build. For additional power, make sure that Ursula/Lyn and Hector/Masked Marth are partnered as supports. This team is noteworthy for having many ways to clear the final map.

A very safe, basic F2P team that makes use of a few bonus units. Masked Marth reprises her role as a healer, while Ursula supplies ranged damage. Anna is chosen since she is a bonus unit, and provides anti-blue combat power. This team may have trouble clearing the higher difficulties, but is a safe bet for completing the trials and can be used if no alternatives are available.

The most important thing to consider when tackling the final map is what set of random enemies have spawned. See below for details, but note that aside from Hector, the color of the units can change considerably.  Enemy position three is the key to luring: Based on which unit color spawns there, you can position a unit capable of tanking both them and Hector two squares above ally position one. Have a unit capable of KO'ing the ranged cavalry on the right side, to eliminate them quickly.

As for Hector himself, he is incredibly tanky, and his Distant Counter dissuades even red mages from trying to KO him. Don't initiate attacks on him when he is at full HP, as that will trigger his Armads. Once he is under half, he will activate Brash Assault, so take the initiative and start initiating combat. Masked Marth is a great candidate for slaying Hector due to her stat buffs and ability to sustain her HP. If you need a bandaid solution, slapping Triangle Adept or an Armorslayer onto a red unit will generally allow them to beat Hector comfortably.

This team primarily focuses on movement and tanking enemy-phase attacks. Hector and Eliwood both have Swap as inherited skills, and Camus has Drag Back to pull Julia out of harm's way. Speaking of Julia, she comes with Rally Def/Res to buff Hector's defensive stats. Camus also has Fortify Cavalry to boost Eliwood's defensive stats from 27/39 to 33/45 (this is with Fury 3), so he shouldn't be defeated by a mage any time soon. He also comes with his default Axebreaker 3 so he can defeat the enemy Hector in one round (in the other Lunatic final map, it would be a 2RKO if he survives enemy phase. Julia has her default Breath of Life 3 and the Breath of Life sacred seal to heal the other three by ten HP every time she attacks. Hector and Eliwood also have an S-support, but even a B-support between them should do the trick. No Summoner supports are required.

This is my autobattle team on Hard 5 and Lunatic 5

Based around abusing Armor bonuses (particularly Armor March 3), support skills (Amelia has Smite, Hector and Effie have Pivot), and healing to make sure I can shuffle my formation with ease. Note:

1) The only reason I chose Lucius was to grind his Hero Merit. Normally I would have chosen my developed Priscilla, instead

2) Effie has Brave Lance+, NOT her default

It's just horses
Submitted by Avo006

The Delthea buffs for attack, Ephraim wrecks shit, Masked Marth heals, and Fae tanks like its no ones business