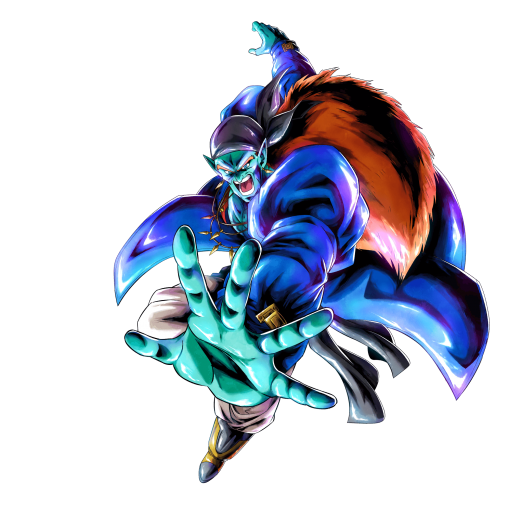 EX Boujack GRN is an oddball of an EX Fighter. The brutal space pirate has taken on a more Supportive role in this incarnation, inflicting his enemies with minor Debuffs and granting his allies significant Buffs with nearly every part of his kit.

While his Supportive/disruptive kit is impressive at first glance, it doesn’t accomplish as much as it appears to, so EX Boujack GRN has a difficult time finding his place in Team compositions. The Sagas Warriors Team appreciates his Support capabilities, but including EX Boujack GRN exposes the Team to a weakness exploitable by a plethora of powerful Purple Fighters like SP SSB Vegeta PUR, SP Super Vegito PUR, and SP Teen Trunks PUR.

The precarious pirate’s greatest weakness is his Green Color. For that reason primarily, EX Boujack GRN is not considered a mainstay on his Tag. Despite this massive set-back, EX Boujack GRN is able to provide his allies with excellent Support, and boasts one of the strongest kits out of all EX Fighters.

EX Boujack GRN’s Main and Unique Abilities allow the space invader to boost his allies’ Damage Inflicted by a staggaring 40%, and Debuff his enemies with +20% Damage Received and +3 Substitution Count Increasing Debuffs.

Notably, the +20% Damage boost bestowed by his second Unique Ability lasts for 20 Timer Counts, allowing for multiple stacks if EX Boujack GRN is frequently cycled in and out of the battlefield. EX Boujack GRN works best as a lead, as that role allows him to stack Buffs and Debuffs more frequently.

A Captain Dies With His Ship

Unlike his SP counterpart, SP Boujack YEL, EX Boujack GRN does not enjoy being the last Fighter standing. EX Boujack GRN’s entire purpose is to Buff the damage of his allies, and if there are no allies to Buff, the mischief maker cannot hold his own.

EX Boujack GRN makes for a great sacrificial pawn in the face of devastating ultimate attacks or rising rushes. Using EX Boujack GRN in this way allows him to get one last Debuff stack on his foe before falling.

Sagas Warriors is the Tag EX Boujack GRN is designed to Support. The space conquistador can be effectively paired with SP Full Power Boujack PUR, a fellow Sagas from the Movies Support Fighter, to fantastic effect. EX Zangya BLU rounds out this deadly swashbuckling combo, ensuring that the Team will be adequately Supported with myriad Buffs in every stage of the match

EX Boujack GRN can also be run alongside Movie Tag Yellow Fighters like SP Boujack YEL or SP Super Saiyan Gohan Youth YEL. EX Boujack GRN sports a Blast Attack-boosting Z-ability that becomes a dual Attack/Defense boost at 5 stars, so he is decent on the Team whether fielded or not.

To ensure complement these two, a defensive Green like SP Legendary Super Saiyan Broly GRN can be used to give the team additional longevity and allow bench support from Sagas From The Movies Fighters, as all three members of this GGY core possess the Tag.

Imperative for the massive stat Boosts it gives across the board.

Being able to stay alive with this Equip is useful, so he can continuously pass on his Supportive Unique Abilities.

More Durability is a good choice, but if the Player feels he’s already fine Defensively, Humph! is a good Offensive option.

EX Boujack GRN was good on release, but was always gatekeeped out of the core by SP Goku GRN. He does have a nice dual Z-Ability though, justifying his spot on the bench if need be.

Pvp team for this meta
Greetings Can anyone help me with pvp team for this meta also can u tell me is…
Help me with a team
image640×1136 2.5 MB 11 posts - 2 participants Read full topic…
Looking for Friends to do Raid Boss and Co Op
Hi. I am a day one player looking for some players (no matter how new or old) to do…
Zenkai ss3 goku
Is the new ss3 zenkai goku any good? i just use 2000 cc on him and i want to know if…
Character Concept LF Ultra Instinct Omen (Sign) Goku
(someone please do the stats) Type : Melee Color : Yellow Tags : Saiyan, Son Family,…
Read More