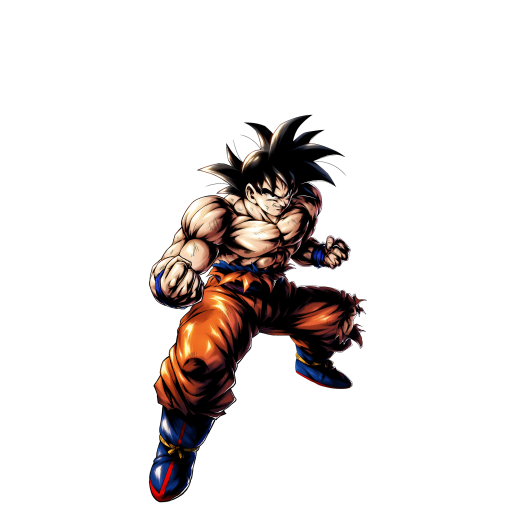 This Goku variant is from the Super Android 13 film, and like most Goku variants from the movies, he has an indomitable fighting spirit, can take visceral amounts of punishment, and finishes off his enemies with one final blow.

Simply put, SP Goku GRN is incredibly durable, and the longer the Match goes on, the higher his Damage potential becomes. He’ll receive his first permanent Damage Inflicted Buff after 45 timer counts have passed, with additional Buffs conferred onto him per defeated Teammate.

His Extra Move also nullifies various forms of Attacks, and gives him a Damage inflicted Buff as well as fully restoring his Vanish Gauge if used successfully. The real highlight of his Toolkit is his Main Ability, which packages a tremendous Heal with one of the most Damaging Ultimate Arts in the game.

All in all, SP Goku GRN has an excellent all around toolkit that truly excels in the later stages of the game.

Normally Crisis can be a bit unreliable and dangerous to try to utilize, but SP Goku GRN receives a massive 35% Damage inflicted Buff for every downed Teammate.

This makes him terrifying in Last Man Standing situations, but it doesn’t even have to get to that point for him to score some meaningful Buffs . With this utility working in tandem with his time-dependent Damage Buffs, SP Goku GRN establishes himself as one of the strongest mid to late-game Fighters in the meta.

His Main Ability Heals him by 35%, and draws him his Ultimate Arts Card, Spirit Bomb Absorption.

His Special Move, Energy Meteor, also provides an effect that can turn the game completely around. This has a 50% chance to completely remove Enemy Attribute Upgrades on hit. This can almost completely invalidate some Fighters that rely on these Buffs to function to the best of their abilities.

Far From Just A Defensive Stance

It even comes with a free Inflicted Damage Buff on activation and pushes his foe back to long range is a card is successfully nullified. This is unquestionably one of the best Extra Arts Cards in the game and getting maximum value out of it multiple times almost guarantees a game win.

Opposing SP Goku GRN’s as well as a few other Fighters pose a significant threat to him, as anything that can remove Attribute Upgrades will rob SP Goku GRN of his precious and hard earned Buffs, rendering him significantly less powerful.

Very notably, the popular SP Super Vegito PUR poses an enormous threat to him, as if he simply clicks his Main Ability, he will remove all of SP Goku GRN’s Buffs - Offensive and Defensive - and subsequently destroy him with his brutal Spirit Sword.

He does come with Cover, taking significantly reduced Damage when switched into a Combo, but does add +2 to his own substitution count when activated, which can be a big drawback if he’s desperately needed on the battlefield.

For such a powerful Fighter, it’s a bit disappointing his Z-Ability only Buffs Blast Defense for Sagas From the Movies or Green Fighters. Not only would a dual Z-Ability have been appreciated, but better Son Family synergy would’ve been a nice touch as well.

Because Goku's Damage Buffs need time to kick in, he's not much of an Offensive or Defensive Pivot for the majority of the early game.

He thrives on Defensive Teams that give him time to build up his passive Buffs by stalling the game. He's very susceptible to rush-down and hyper-Offense Teams that don't let him stabilize.

SP Goku GRN is one of this Team's best Defensive options, and thanks to its plethora of Support Fighters, he can function incredibly well on it. SP Hero Tapion RED and SP Full Power Boujack PUR give him some leeway in the Offensive department, allowing him to work as an Offensive Pivot even before his passive has time to build.

While the ubiquity of Purple Fighters is a problem for Goku, it just so happens that his son that he shares this Tag with is the most powerful Yellow Fighter in the game, SP SSJ Youth Gohan YEL.

Gohan is arguably the strongest counter-pick Fighter in the game thanks to his Switch lock, and can protect Goku from those problematic match-ups. In any case, Goku himself is an excellent Defensive Fighter and a guaranteed core-choice in bouts against Androids.

SP SSJ4 Goku PUR, SP SSJ Youth Gohan YEL, and SP Angry Goku BLU all represent a changing of the guard for the Son Family Tag, but despite the powercreep they bring to the table, SP Goku GRN can still compete. He makes an excellent anti-Android option, and remains a solid choice in fights against enemies that lack Purple Fighters.

He's primarily a Defense Fighter despite his devastating Offense later in the Match, and this is one of the better Defensive Equips in the game.

The Strike Damage Buff this Equip offers is negligible in the face of the amazing Defensive Buffs it grants the shirtless Saiyan.

More Health and Blast Attack is excellent, although other choices here would include: It's All Up To My Fists! for Ultimate Move Damage and Vanish Gauge Recovery, or You're Sure To Win! In Blast-centric Teams.

SP Goku GRN’s lack of reduced cost for Blast Arts Cards as a Ranged Fighter, and the fact that he can struggle to do Damage early in the game holds him back a bit. He’s also exceptionally vulnerable to any Fighter in the game that can remove Attribute Upgrades.

Still, he’s outrageously durable, and gets increasingly scary the longer the game goes on. His Ultimate Move has the potential to kill some Fighters in one blow