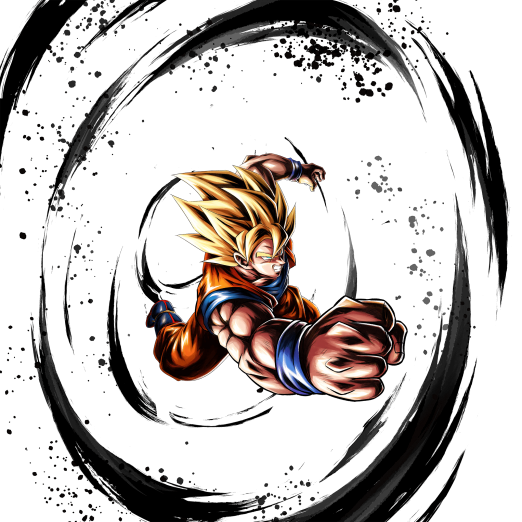 While SP SSJ Goku (RoC) GRN joins a competitive field of Green Saiyans, a crowd mainly comprised of other Green Goku variants, this Goku impresses with a solid strike-based toolkit that has some incredible burst potential. His Strike-based kit is exactly what sets him apart and makes him viable, as the Saiyan Team is a largely strike-oriented Team.

Goku might not be an offensive juggernaut the second he enters the field, but he makes up for that deficiency with decent Defensive utility and combo extension. His free Strike Card Draw when hopping onto the battlefield ensures he'll always have gas in the tank, and it sets him up to synergize perfectly with the Support Fighters on the Saiyan Tag.

His sustained damage cut effects and self-heal when below 50% health make him a strong long-game contender, and his Special Move is a one-hit one-count atom bomb when enhanced by a few of his Strike Arts.

Just because SP SSJ Goku (RoC) GRN isn't breaking any new ground doesn't mean he's not a great option for the Saiyan and Sagas from the Movies Teams. Each of those Tags were itching for a solid Green Melee Type, and that's exactly what Goku is.

Goku is the quintessential Melee Fighter, with a toolkit based entirely around buffing Strike and Strike-based Special Move Damage, and a Strike-buffing Z-Ability to match.

Goku enters the field drawing a Strike Card and buffing himself with a respectable +40% Strike Damage. His Damage exponentially increases whenever he sustains a hit, which is solid, but unreliable, so at base, Goku will be relying on this +40% Buff to deal Damage.

Each of the Strike Cards he uses increases his Special Move's Damage by 20% for 15 Counts, and seeing as that Special Move is discounted by 15 Ki and accessible with his Main Ability, it's not uncommon for him to bust it out with spectacular results.

That aforementioned main ability also restores Goku's Ki by 50 and increases his Draw Speed by 2, setting Goku up for a burst of Damage whenever the situation calls for it.

With these abilities, the 5% Heal Strike Arts Card he adds to his Team's deck, and his 30% self-heal when hitting 50% health all taken together, it's clear that Goku is adding quite a bit of defensive utility to his Teams.

The 50% Strike Damage Buff he obtains when taking a hit is valuable enough to justify sending him in as a defensive pivot, and he doesn't do a terrible job as one. It's worth mentioning that Goku's Buffs that he gives himself when taking damage activate if he charges through a Blast Arts with his Blast-Armor Special Move.

If that happens, Goku is guaranteed to put a gaping hole in the opposition.

While Goku does Offense and Defense well on his own, his true strength isn't apparent until he's paired with Support Fighters. Goku might draw a Strike Arts when he hits the field, but he's not restoring Ki, and a mere +40% Strike Damage Buff isn't really enough to dominate solo if he doesn't have allies able to increase his efficacy.

Zenkai 7 SP Youth Goku YEL is, quite frankly, required on the Team if Goku is being used. The Support he provides is instrumental for facilitating his Super Saiyan counterparts gameplan.

SP SSJ4 Goku PUR and SP SSB Goku RED are both fantastic partners, though the former will have a bit of trouble if he doesn't have any Red Fighters watching his back. SP Saiyan Saga Goku BLU is solid, but his lack of Defense is really starting to make him tough to use.

Goku is the long-awaited replacement for SP Goku GRN on this Tag Team, which desperately needed new blood. Goku is able to pump out high Damage when paired with this Tag's superb support options, SP Turles YEL and SP Full Power Boujack PUR.

Boujack might not be Defensively powerful anymore, but his Cover Change makes up for it and his Support is truly what makes him excel.

Turles is a tad unwieldy. Despite that, he's able to protect Goku from troublesome Purple enemies. SP SSJ Youth Gohan YEL is a decent Yellow option if Turles is unavailable, but Goku's reliance on Support is so severe that doing so is only recommended if another Support Fighter is present in the Team composition.

This Tag needs a bit more support for it to truly take off. Right now it's able to hold its own, though.

Why don't you try me on for size?

This Equip should be used in place of the above Equip if Goku is fighting on the Movies team.

His Damage output can actually be a little inconsistent at times, but he’s supplemented very well by his team if he's used on Super Saiyan. His Main Ability provides an extremely dangerous situation if he gains priority, as it increases his Arts Card Draw speed by 2 levels and draws him his brutal Special Move. As an added bonus, he adds a Strike Card to the deck that heals 5% on hit.

That being said, SSJ3 Goku GRN, Goku Black GRN, Metal Cooler GRN and Z7 Broly GRN have all replaced him on the core of his favorite teams multiple times.