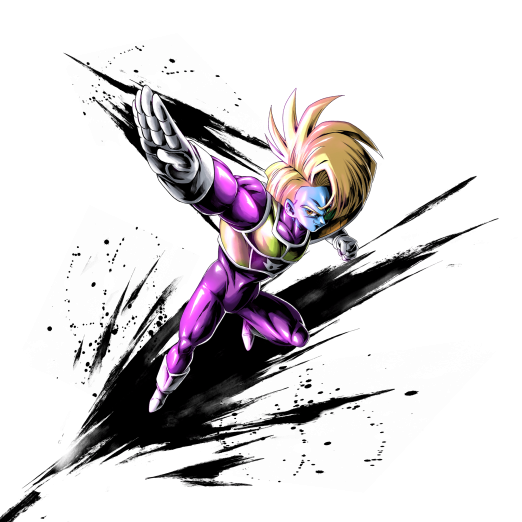 As an underling of Coora, EX Thouser can’t do much to hold his own but becomes incredibly powerful with the guidance of his sinister leader. He’s quite tactically Supportive, but Damage is where his true strength lies.

That being said, even his Damage Buffs are a little strange. Not poorly focused per se, just strange.

Everything EX Thouser PUR does is improved with a Coora variant on the Team—specifically SP Coora GRN since they both Buff Sagas Warriors, but he is not out of place with other Coora variants like SP Final Form Coora BLU and SP Metal Coora RED.

Under these circumstances, his Strike Damage can be Boosted by a potential 85%. This makes him well worth putting on the core.

All three SP Cooras have some pretty incredible Extra Moves, so this Fighter’s Extra Move drawing Main Ability is especially useful not just to himself, but the Team as a whole.

Nothing without His Leader

Because so much of his toolkit is tied to Coora variants and his stats are otherwise pretty unimpressive, EX Thouser PUR isn’t super viable on the core of a Team without Coora. On the bright side, his Z-Ability is still very useful on the core of any Sagas Warrior Team.

His Strike Attacks do Piercing Damage, but his Special and Extra Moves and Intimidate Unique Ability all Slice Damage related.

This gives those Buffs a very particular use, but don’t Buff the overall Damage output of his Special Move by as much as they would if they were just Special Move Damage Boosters.

This Team with Coora variant is the best option for EX Thouser PUR regardless of whether he’s on the core or bench.

His toolkit gives him high Strike and Special Move Damage output, which makes him great for Damage bursts and longer running Combos.

This is a Team where he would be better served on the bench if the Core has multiple Coora variants since his Abilities are the most useful on a Coora focused Team.

He wouldn’t be too bad on the core either, but in this scenario, the bench would need a mix of Sagas warrior and Lineage of Evil Tagged Fighters in order to get the most out of EX Thouser PUR and the Coora variants he’s paired with.

He's a one-dimensional fragile Melee Fighter, and this is one of the better Equips in the game.

This gives him the most Strike Attack possible.

Essential for any EX Purple Fighter.

It's a shame he wasn't given more Coora variant Buffs, otherwise there's not much reason to put him in the core then there are so many other established high tier Sagas Warriors out there.

Even putting him on bench only makes sense for Players who don't have enough SP Fighters to Z-Buff.