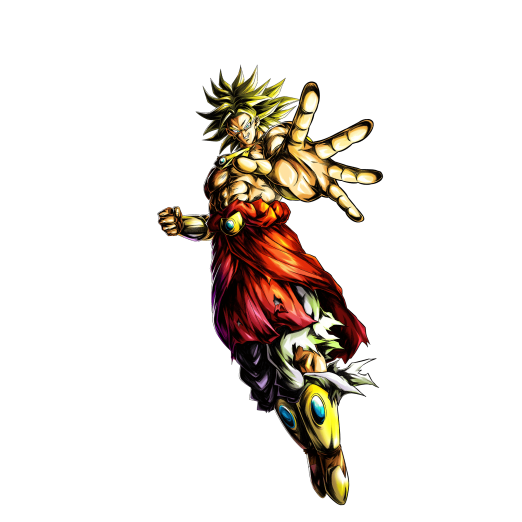 SP SSJ Broly YEL is one of the most disappointing releases in Dragon Ball Legends. His only saving grace is due to him being the health buffer for the Powerful Opponent tag and as such is 100% needed on the team. He excels at dealing great Damage with his Ultimate Arts(once it’s stacked up) and has nothing else to offer.

SP SSJ Broly YEL’s Ultimate Arts is incredibly powerful as you can ramp up the Damage by using Strike Arts. His Ultimate is also AoE and if used correctly can deal devastating amounts of Damage to all Fighters on the opposing team.

SP SSJ Broly YEL’s toolkit is disappointing, especially for a Fighter released in 2021. Due to this, he is just a bench option for Powerful Opponent and should not be brought into battle as he can’t offer much outside of his Ultimate. His Damage is rather poor, he doesn’t fair well defensively and the icing on top is the fact that he can’t chain his Strike Cover with anything.

As mentioned in the Weaknesses, SP SSJ Broly YEL is not a core Fighter even though he is the best YEL Fighter for the Powerful Opponent Tag. However, he is 100% necessary on the bench for this team as he has the health Z-Ability.

You can run SP SSJ Broly YEL on Super Saiyans as he is the best YEL Super Saiyan Fighter but you’re better off running the other top meta Fighters instead of him.

A must have Equipment for Broly, greatly boosting his Strike Output as well as his Ultimate Damage.

A HP Equipment is essential on every Fighter. Here, Broly can also use Awakened No way... as an alternative.

A Pure Strike Equipment is optimal for any Melee Fighter, greatly increasing their Strike Output.

SP SSJ Broly YEL does have a good toolkit, but it’s unfortunately attached to a non-Zenkai, non-Transforming unit. His Damage inflicted is a bit on the lower side unless he’s matched up against a Son Family unit, so he at least makes a nice counter to the likes of SP UI Goku PUR and SP SSJ3 Goku PUR

If he’s not facing a Son Family team, his Ultimate which can scale up to an additional 80% Ultimate Move Damage inflicted can still make a dent in many units. Crucially, he does give Powerful Opponent a Health Z-Ability, which will keep him relevant in one way or another for a while.