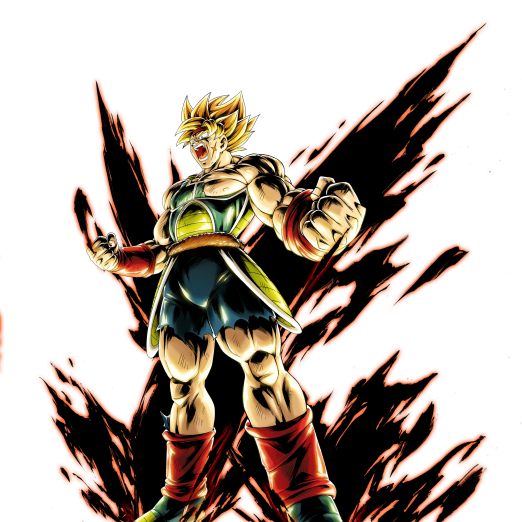 SP SSJ Bardock BLU has remained relevant through several updates, even as a steady stream non-Super Saiyans released, thanks to his incredible ability to Buff the aforementioned tag's Critical Rate and Critical Damage.

Now that this past meta's menace has received a Zenkai Awakening, he's back, and ready to critically impact the pvp landscape yet again. Bardock's playstyle hasn't fundamentally changed much, he's still a solid Mixed attacker with excellent Support capabilities, but his new Unique Abilities expand his role quite a bit.

He's significantly more self-sufficient, and his straightforward Offensive techniques have been given excellent upgrades, including a massive Ki Recovery boost, from 50% to 70%, and a suite of Damage Buffs that trigger once 50 Timer Counts have passed. He also gains quite a bit of extra Damage when his allies take hits, letting him function well even without another Super Saiyan Ally on standby.

Bardock isn't immune to the troubles he had prior to his Zenkai Awakening though; his nature as a Tag supporter means he's only as good as the Tag he's Buffing, and in this case, it's in dire straits. The pool of usable Super Saiyans is shallow and stale, aside from a few very important recent arrivals.

Altogether, Zenkai 7 SP SSJ Bardock BLU isn't going to completely turn the Meta on its head like he did in ages past, but he'll still put up a hell of a fight.

SP SSJ Bardock BLU’s “The Golden Saiyan” Unique Ability remains the defining part of his Toolkit even after hid much-anticipated Zenkai awakening. No matter what Super Saiyan he swaps into, he'll provide them the means to inflict catastrophic Damage.

The fact that the Damage Buff he grants lasts for 20 Timer Counts is a fairly important detail, as it's more than possible for Bardock to gain the benefits of his own provided Damage Buff with frequent switches. When that Buff is active alongside his generic Damage Inflicted Buffs that he gets when a Super Saiyan Ally is active, Bardock becomes a very deadly mixed attacker.

Bardock's expanded Zenkai Toolkit elevates him above many of the Game's Support Fighters, with a 20% Sustained Damage Cut Buff active at all times and a number of combo-augmenting abilities including the potential to achieve +2 Card Draw Speed with his Main Ability, he's far from a one trick pony.

Speaking of his Main Ability, it's become something very frightening in a vacuum. It combines the terror of Draw Speed with added Ultimate Damage, and the Ultimate it draws has the added bonus of fully restoring his Vanishing Gauge. With 50 seconds passed and 5 hits registered on Allies, Bardock can solo entire teams.

In optimal conditions Bardock's inflicted Damage Totals hit numbers well above 100%, which is nothing to scoff at when they're attached to Zenkai Stats.

Bardock is absurd in optimal conditions, but it's tough to engineer those consistently. For one, he needs Super Saiyan allies, which is a Tag populated with very few Fighters that synergize well with Bardock. This isn't a deal breaker though, as Bardock's support can turn even the most pitiful Super Saiyan into an Offensive Juggernaut, but that's not the only restrictive aspect of his design.

The fact that Bardock needs to wait 50 Timer Counts for his full personal Buff passive to activate negates some of its value. In a meta as fast paced as this, the game could be decided well before the 130 Timer Count mark, thanks in no small part to Fighters that can wipe the floor with Bardock's fragile teammates.

The Super Saiyan Tag outgrew papa Bardock a long time ago, but after his Zenkai awakening, he's easily this Team's best Fighter.

A mandatory teammate for Bardock is SP RoC SSJ Goku GRN, whose nuclear warhead Special Arts card becomes an extinction level threat with Bardock's Critical Buffs backing him up. Aside from Goku, the Super Saiyan Tag doesn't have many new-age Super Saiyans that function well in a Saiyan-oriented build.

EX LSSJ Broly YEL is a great pick. Despite his Defensive deficiencies, his Switch Locking effect can guarantee early kills on frail fighters, and his Z-Ability's Buffs to Blue Fighters' Strike Attack Stats helps Bardock out quite a bit.

SP Super Vegito PUR, despite his age, can function well with Bardock, and his Strike Cover can add an extra piece of Defensive utility to the Team.

Transforming Super Saiyan Fighters might not perfectly synergize with Bardock, but they can really tear through the opposition when they get going. No Fighter exemplifies this more than SP Vegito YEL, as his massive Damage numbers can become overwhelming fast once a couple Crits land.

Whether he’s the off Color fill or a primary Fighter in a Blue Color Counter Team, SP SSJ Bardock BLU would be a great fit in this Build.

A must-have Equip for Bardock, providing a Pure Strike Buff regardless of the Fighter's taken alongside Bardock.

A great Equip for a strike-oriented Fighter.

A HP Equipment is essential on every Fighter, greatly boosting survivability.

He was pretty significantly held back by his team when his Zenkai first dropped, but now he and SP Super Gogeta RED are back together, and able to rip through most units in the game. He's the leader of the Super Saiyan team due to his switch out Buffs, but he himself is a devastating offensive force with some survivability thrown in just in case. He has changed the landscape of the game on multiple occasions now.