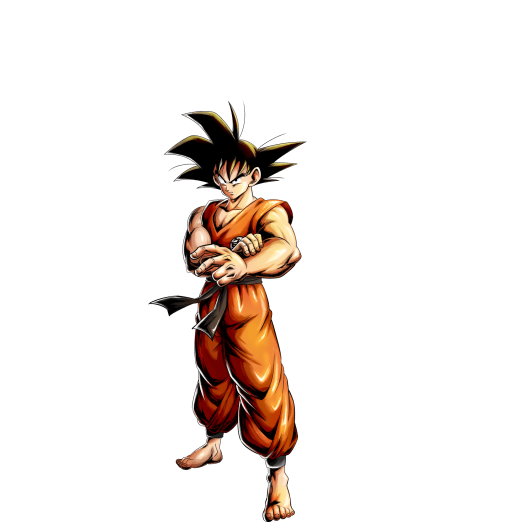 This Goku variant's frantic mix of Offensive power and Support utility perfectly mirrors his position in his desperate, fatal struggle against Raditz. SP Saiyan Saga Goku BLU is an absolutely vital Supporter that is just as potent Offensively as the Allies he's assisting.

This relentlessly versatile Fighter pays dividends for his Team in every situation when he's on the field. He offers Healing, Permanent stacking Damage Buffs, Debuff spreading, Substitution Count Reduction, and even Card Draw Support - something he's introducing to the game.

This suite of Support effects by itself makes him a standout Fighter, but his mixed Offensive prowess is what puts him over the top.

SP Saiyan Saga Goku BLU can Buff his Allies' Inflicted Damage by a permanent +10% whenever he switches to standby, which scales up to 40% and cannot be removed by Buff negation effects.

This ability of his sets the tempo of his game plan; Goku rushes in, pokes some holes in the opposition, rushes out, and significantly increases his friends' capacity for carnage as the match progresses.

He makes that frantic switching style much more manageable with his Extra Arts Card, which not only Heals him and Increases his own Damage by 20%, it also reduces all Allies' Substitution Counts by 2, keeping the Team's pace mercurial.

These aren't the only Support effects he's packing - whenever he switches to an Ally, they're granted an additional random Card if Goku left any amount of room in the hand for one.

This lets Goku facilitate long, Damaging Combos for his Allies, though frankly, he doesn't need Allies to be strong.

Tougher Than You Thought, Huh?

It is very unconventional for a Fighter with this level of Support to be so powerful Offensively.

Goku blasts onto the battlefield with unconditional Buffs, +50% Strike Damage and +30% Ki Recovery, whether he's got Allies behind him or not. If he does have a Saiyan Saga (Z) or Saiyan partner, he gets an additional +50% Blast Damage and +30% Vanish Gauge Recovery.

Just these Buffs alone would make Goku a stellar Offensive Blue Fighter on all of his Tag Teams, but they don't even take into account the crown jewel of Goku's kit, the Bending Kamehameha.

Goku's Main Ability enhances the Inflicted Damage of all Allies by +20% instantly and Draws the Bending Kamehameha, a devastating Massive-multiplier-packing Ultimate Arts Card that comes with a 50 Ki rebate and a 20% Heal for the whole Team when it makes contact.

When this Ultimate's obviously absurd strength is considered alongside the Buffs Goku offers to his Team and to himself, it's clear that SP Saiyan Saga Goku BLU does not suffer from the same dependency problems as other Support Fighters.

Goku is absolutely capable of holding his own in combat, and even if he takes a few lumps, he leaves his foe with a +20% Damage Received Debuff for 20 Timer Counts as payback.

Woah! I Really Felt That One...

Unfortunately, Goku's Defense is not on the same level as his Support or Offense. SP Saiyan Saga Goku BLU has a few ways to Heal - from the first use of his Extra Arts Card and his Ultimate Arts Card, but neither are particularly reliable when he's getting pummeled to dust.

Goku has no way do reduce the amount of Damage he takes, which is a serious fault in an Offensive Meta.

Because he's so reliant on Defensive Allies to pick up his slack and his Supportive game plan is so oriented around Switching, getting prevented from Switching is Goku's worst nightmare. His weakness to pure Offense and Switch prevention holds him back from being truly dominant.

SP Saiyan Saga Goku BLU simply fails in the late-game. His personal Damage Buffs are ephemeral, and without Saiyan or Saiyan Saga Fighters, he doesn't Buff his Blast Attack when he enters combat.

Unfortunately for him, he simply cannot survive with no Allies to rely on, though he can deal decent Damage by his lonesome if he had the chance to stack his Buffs.

SP Saiyan Saga Goku BLU is a fantastic choice for any Saiyan composition looking to excel well into the late-game. His Z-Ability's massive Buffs to Strike Attack and Defense are exactly what this Tag wanted from him.

SP Bardock RED and SP Bardock YEL each shore up Goku's Defensive weaknesses, and Goku's stacking Buffs turn the former into an absolute devil in the final moments of a Fight. Goku's Support brings the offense of the already deadly SP Vegito YEL to new heights in the late-game, where he shines.

HE Shallot LGT's already fantastic Offenses become overwhelming with Goku behind him, and Shallot can even help Goku out Defensively in return.

Additionally, the additional Support provided by SP Baby Vegeta GRN can double down on Goku's own impressive Damage, creating a core that is both synergistic and fast.

This fledgling Tag is far from properly developed, but it at least possesses a rock-solid Core. SP Piccolo YEL, SP Raditz GRN, and SP Saiyan Saga Goku BLU himself all synergize with each other very well.

Piccolo and Raditz Defend and Offend respectively, while Goku Supports. The Team's universally high Blast Damage means that the bench should be comprised of Buffers that favor that attacking stat.

Goku's easily this Tag's best Support Fighter. His Z-Ability makes Teambuilding a tad limited, as it doesn't help any of its numerous Hybrid Saiyan Fighters, but it can absolutely function swimmingly in cores predominantly comprised of Gokus.

SP Super Saiyan 4 Goku PUR synergizes with his nostalgic counterpart, taking advantage of his Card and Damage Support with his in-built Ki Restoration whenever he hits the field. His Defensive power also takes care of Saiyan Saga Goku's main weakness.

If one can look past the synergy problems, SP Super Saiyan Youth Gohan YEL is a superb partner for this Goku. Gohan's deadly Crisis Utility and switch-locking are all the more dangerous when he's Buffed.

This one might seem like a strange choice at first, but when its Buff to Vanish Gauge recovery stacks with Goku's innate equivalent Buff, he's very likely able to recover it an additional time before he needs to switch out.

Otherwise, this Equip's Buffs to Strike Defense and Ultimate Arts Damage help him out in necessary areas. It significantly increase Goku's kit's effectiveness.

This tried and true equip's Buffs to Blast Attack and Health are appreciated by Saiyans the universe over, and Goku is no exception.

This one increases Goku's Blast Damage, Blast Defense, and provides a pure Buff to his Strike Attack, which can ultimately result in a significant Buff to his overall Damage output if other Strike-boosting effects are present on his Team.

His “You let your guard down” Unique Ability is what makes this Fighter pretty good. If switched out enough, he provides his Teammates and himself a permanent 40% Damage Buff which cannot be cancelled. His “Resolute Fighting Spirit” gives him plenty of Damage Uniques for himself to ensure he’s not simply a pure Support.

He's a bit older and was fragile even on release, but he can still be used to funnel resources into much more powerful Saiyans, and do it somewhat reliably.